The following night in Paris happened in April 2014

I arrived in Paris at four in the afternoon, having taken the train from Nice earlier that day. My flight back to Norway would leave the next morning. Flights out of Nice had been so expensive, it was cheaper to take the train to Paris, spend a night here and then catch a flight back to Norway. I had one night in Paris and had to make the most of it. Next morning the train for the airport left at seven am.

So, what should I do? What is the best way to spend only a few hours in Paris? I hadn’t prepared at all, knew nothing of the city.

First of all, I knew I had to avoid the Eiffel Tower. Way too touristy, not really that special and I have seen it a thousand times in pictures. Not only did I decide to not go and see it. I decided to see if it was possible to not see the tower at all. Not even in the distance. Not one second of my time here should be wasted looking at the Eiffel tower.

Okay, good plan I thought as I headed out of the crowded train station and hailed a taxi. Gave the taxi driver the address of my hotel and he drove off.

The taxi driver had arrived at the hotel, I paid him and got out. The entrance to the hotel was up a narrow flight of stairs, the elevator only ran from the second floor for some reason. I dragged my suitcase up to the reception, checked in and found my room. Not very big or very nice, the wallpaper in a ghastly pink, but I was not going to spend many minutes awake in my room anyway. The bed looked okay, that should do. Too comfortable a bed would only increase my chances of over-sleeping tomorrow morning. 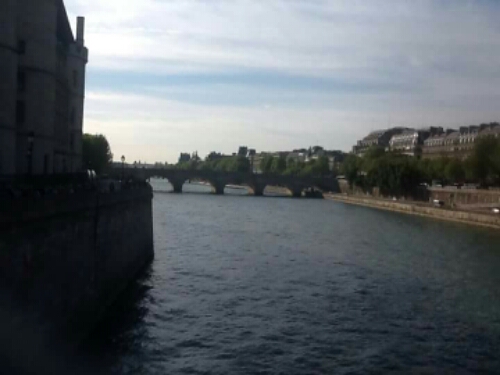 I took a quick shower, it felt very good after a long day of traveling. I wondered what else to do while in Paris.

I then remembered Laura, a girl I had met at a festival in France the year before. She lived in Paris. Maybe she had time to see me. I called her, she had no plans that evening and we decided to meet in front of the Louvre at seven.

Great, two more things on my list. See Laura and see, at least from the outside, the Louvre. I didn’t know much about the Louvre. It’s a museum, Mona Lisa hangs there and it’s big. And there is a glass pyramid in front of it. At least something good came from reading Dan Brown. I knew about the glass pyramid. 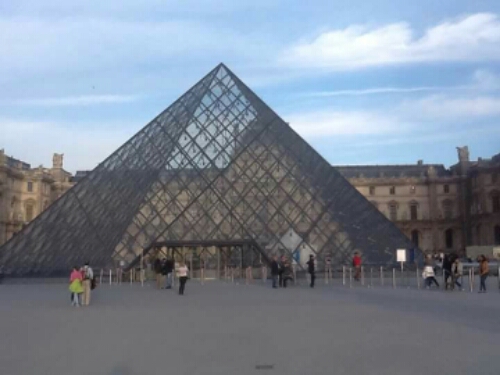 I found my map of Paris, located my hotel on it. Then located the book store. Great, Shakespeare and Company was only a short walk away, and on my way I would pass Notre Dame. I would see that as well. Five things on my list. And I had to buy a souvenir shot glass for my collection. Item six on my list. I suddenly had a lot to do. I felt very proud of myself, this was going to be a great night in Paris. Who knew what else might happen? 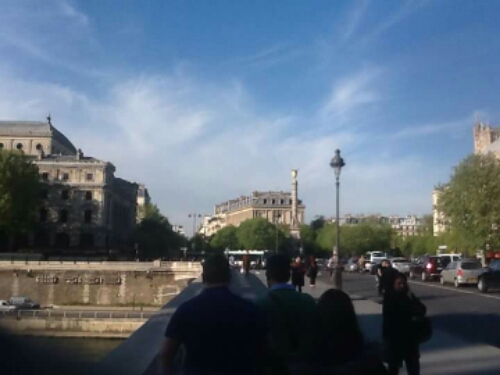 I left the hotel around five, headed for Notre Dame, stopped at a souvenir shop on the way and got a shot glass. Every place I visit I buy one. I had forgotten the map in my hotel room and didn’t bother to go back and get it. I thought I remembered the way. I should just follow this road to Shakespeare and Co, and from there follow the river. The way back I could worry about later. 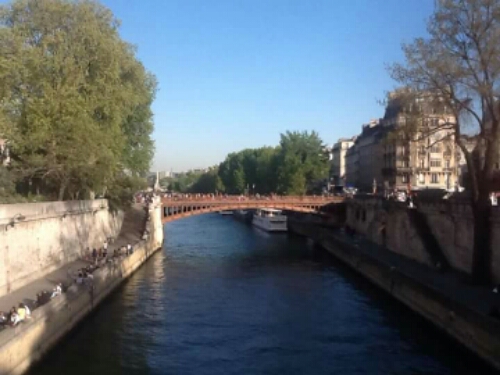 I found Notre Dame easily, and the book store was just across the river. The river I hoped would lead the way to the Louvre. 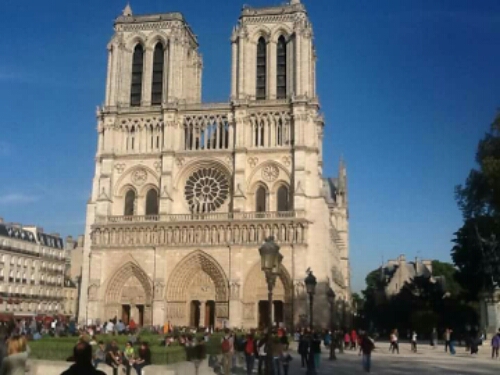 A few quick pictures of the cathedral, then a long stay in the book store. Shelves upon shelves with books. So many of them I wanted. I had already blown my budget in Nice, and managed to restrain myself. I only bought two. I was not satisfied, wanted to buy more, but I just could not afford it. Two was two too many anyway. 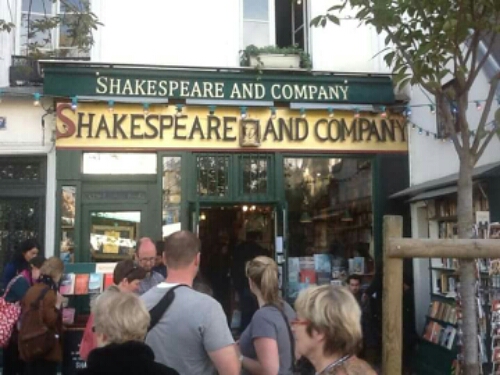 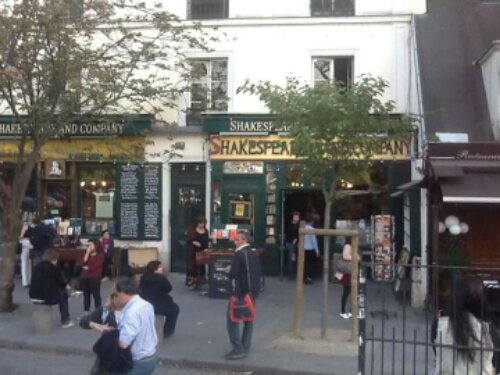 Almost an hour had passed while browsing books, it was time to go. It didn’t take long before I stopped at a vendor and bought an overprized bottle of water. I had arrived on one of those rare days where Paris was hotter than Nice, I was dripping with sweat. I finished the water quickly and continued walking towards the Louvre.

I wasn’t far from the Louvre when I looked up and could see the Eiffel Tower looming in the distance. Oh no! I had failed. I quickly looked away but the damage was already done. If I’d only looked the tower up on my map before I left my hotel room, or just brought my map, this could have been easily avoided. Rookie mistake! But I wasn’t gonna let this little mistakes ruin my evening. I’m sure Paris has a lot more to offer than not seeing the Eiffel Tower. What’ done is done. I continued on. 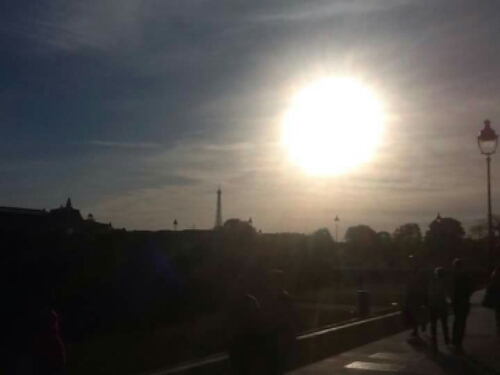 Stupid Eiffel Tower in the distance

I had about half an hour to study the Louvre, from the outside, before Laura came. A beautiful building, very large, and with a big glass pyramid in front. As I already knew. Somewhere inside was the Mona Lisa. I was perfectly fine with not seeing the painting. 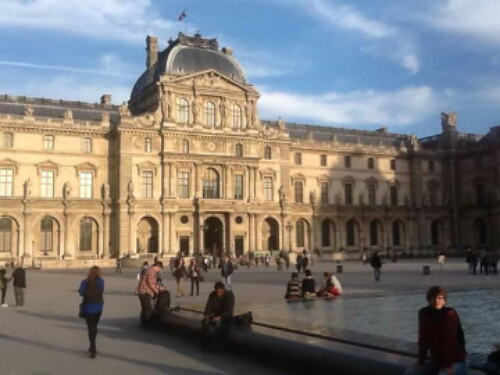 I walked around for a while, took a few photos. The place was crowded with tourists, everyone snapping pictures and avoiding all the vendors selling cheap souvenirs. I must be in at least a hundred people’s pictures after that day. And I got quite good at walking in wide circles around vendors.

I had grown tired of the whole place already when I met Laura in front of the pyramid. She did not see me at first, but luckily we have phones, she called me and we found each other quickly. We set off at once in search of a bar Laura knew. Eventually we needed to eat dinner, Laura knew exactly where to eat. On our way to the restaurant there was a cool bar and now it was happy hour. Half price beers! We had to have a pit stop there.

Meeting up with Laura was great. We chatted extensively over our beers, and it was nice to meet up. Only half a year since we last met, a lot had still happened in our lives and we had much to talk about. There never was that awkward silence.

Eventually we headed to the Black Dog Restaurant, a heavy metal Argentinian steak restaurant. I just loved the combo! A bar area downstairs, dining area upstairs. Dim lighting, interior done in black and red, and of course heavy metal blasting out from the speakers. We quickly got a table and ordered each our big steak, potatoes and a bottle of red wine to share. 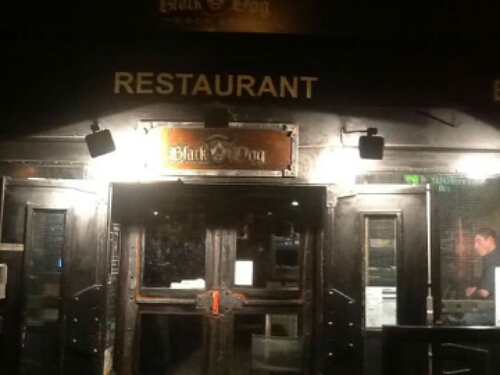 The meal was delicious, the meat cooked just right and the wine complemented the food very well. I was very full when I finally pushed my plate away. A huge steak dinner while listening to Iron Maiden wasn’t what I had expected from Paris, but I was pleasantly surprised.

After eating we moved from the dining section and to the bar. We had time for a few more beers before leaving, and now a band was going on stage. A local metalband, a bit too heavy for me. I like heavy metal, but some of the more aggressive bands; primal screams, drum machines and trashy riffs is just a bit too hard for me, sounding a bit more like noise than music. I always appreciate live music though, and had a great time. The performers were skillful and the atmosphere was great.

A little after midnight it was time to call it a night. I had an early flight the next morning and Laura had work. We said our goodbyes, she headed to the metro, I started walking towards where I thought my hotel was. I was a little bit lost and lacking a map, but it turned out the hotel was a lot closer than I thought. Just around the corner in fact.

Just after one am I climbed into bed and quickly fell asleep. I was very satisfied with my night in Paris. I came totally unprepared, but everything worked itself out. I had accomplished everything I set out to do, and more, except not seeing the Eiffel Tower of course. I had a great time with Laura, the food was really good, and I had seen a live band. All in all it had been a good night and I would love to visit Paris again sometime. I might even go and properly see the Eiffel Tower next time, if I can tear myself away from all the books at Shakespeare and Co. My only regret was not having more time and money to spend there.

The next morning I got up in time, made my flight and returned to Norway. My one night in Paris was over.

0 thoughts on “One night in Paris”