Tokyo Underworld: The Fast Times and Hard Life of an American Gangster in Japan

I read Tokyo Underworld by Robert Whiting in June 2015

Tokyo Underworld tells the strange and interesting story about Nick Zappetti, a native New Yorker who moved to Japan as part of the invasion forces after the Second World War. Working his way up the criminal ladder, in time he became known as ‘the Mafia boss of Tokyo’.

The Japanese Mafia, the Yakuza, is known world wide. We have all heard stories of how Japanese gangsters cut of parts of their fingers, and how the Yakuza were the only ones in Japan sporting tattooes. Now they even have offices set up in most neighboorhoods we are told. 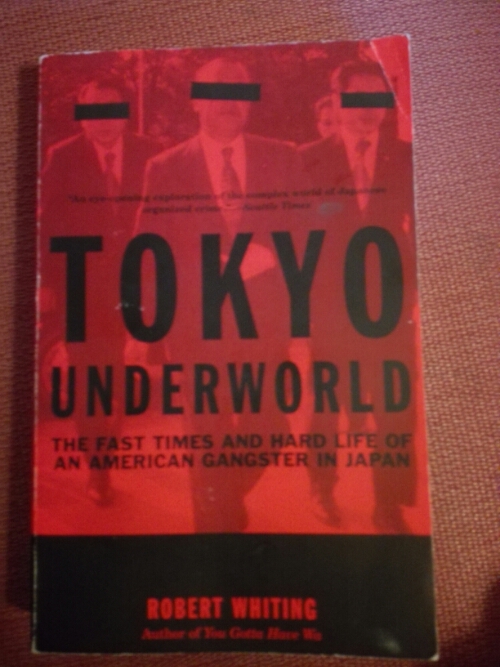 But what really goes on in the Japanese underworld? Who are the main players, how do they make their money, and how are their connections with the government?

This book does not only tell the story of Nick Zappetti and his criminal activities in Tokyo, it also tells the story of the Japanese underworld from World War Two and up until today.

The author has used his personal connection with Zappetti, having known him for years, to get the information and the stories first-hand, then done extensive research, including over two hundred interviews with people depicted in the book, to confirm it all.

The result is a well-informed book telling the story of the underworld in Japan. Filled with interesting anecdotes to go with the story. It is also well written, although I found it hard sometimes to keep track of all the different characters in the book, only made harder by their Japanese names. This is a general problem for me when reading about Japan though, the names are just too different from European names.

The story of Japan’s underworld is an interesting story, skillfully told by Whiting. Totally recommended.

For more Japanese books, see my Books From Japan Page.