I visited the Warrior Celt in Ueno, Tokyo several times in March 2014.

Trains in Tokyo don’t run at night. If you are out drinking and miss your last train home you can take a taxi if you live close, or find another place to sleep.

A capsule hotel is one solution. Another is to find a bar which allows their patrons to sleep at the table.

The Warrior Celt is such a bar. It is old, it is shabby, has not been refurbished in years. Japanese salarymen come in late at night, orders a beer and fall asleep at their table, the beer untouched. When the trains start running again they are woken by the bartender. 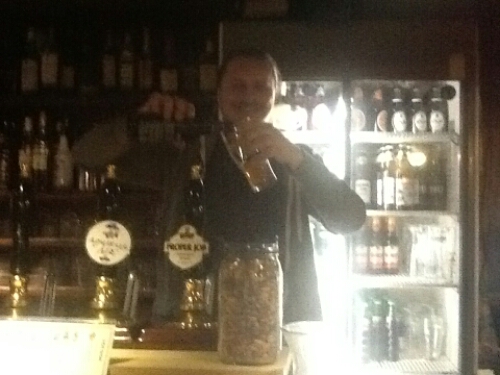 Trying out as a bartender.

On one of my visits I got into a conversation with the owner. From the UK, he had met a Japanese girl and moved to Tokyo. He opened the bar and that was his occupation for years. Now he had started importing beer to Japan, he only kept the bar as a hobby and a place to drink. I heard Japanese people refer to it as the oldest bar run by someone from the west still in operations in Tokyo. I have not been able to confirm that. 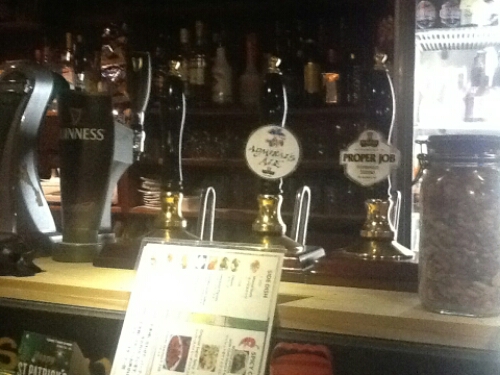 Their selection of beer on tap.

The Warrior Celt is shabby, it is run-down, it is old. It needs a new coat of paint, new furniture, a new toilet. But I loved it. So informal, so casual. Always interesting people to talk to, both Japanese and expats. The bartender was a really nice girl who would chat with you all night. If you wanted to try working behind the bar that was no problem. I could always plug my iPod into their speakers and control the music. The beer was really cheap too.

I am no big fan of posh clubs, stylishly decorated with overpriced drinks and too loud music. I would much rather go to a bar, someplace the locals drinks, somewhere with regular customers. The Warrior Celt is the opposite of a posh nightclub. It does not look modern, there are few drinks on the menu, but has cheap beer and the opportunity of engaging in a conversation with a local.

I met many interesting people at the Warrior Celt, had great conversations and made friends. Even though it is a foreign bar, the Warrior Celt offers a true Japanese experience.

When the bartender asked me to watch the bar while she ran an errand I knew I had found my kind of bar. For twenty minutes I was loving it behind the bar, and forgot to charge myself for the beer I bought.

5 thoughts on “The Warrior Celt”