I have taken the Shinkansen many times. The following was written in July, 2015

I am currently on the Shinkansen, the bullet train, travelling from Tokyo to Osaka. The Japanese bullet trains are famous throughout the world, known for their speed and ability to run on time. Coming from Norway, where you expect the trains to be at least twenty minutes late, it was quite a shock to experience the Japanese train system, where a twenty second delay on average would be considered a scandal. 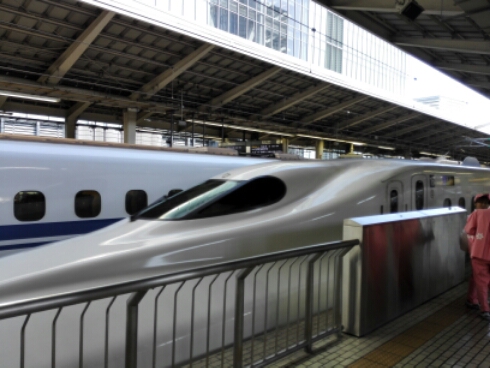 The front of the train

Having tried the Shinkansen several times now I have to say I am impressed. Always on time, very frequent departures, large and comfortable seats with plenty of leg room. With a bento box (Japanese lunch box) and some drinks bought at the station this trip is very comfortable. 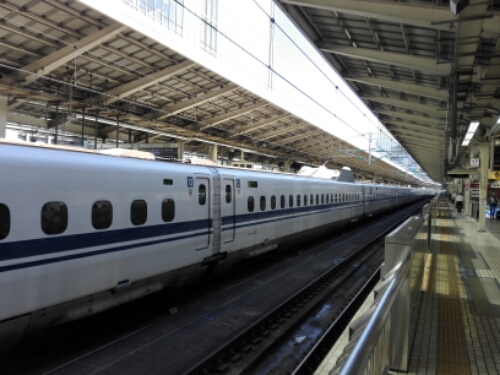 With 16 cars the train is so long

Plans for a high-speed rail network was once more laid out, the process made easier by some tunnels already being built and land purchased before the war.

Japan’s old railway network was useless for high-speed trains, the gauges were too narrow and the lines had to many twists and turns. Therefore, a new line had to be built, and shinkansen means new trunk line. The first shinkansen line was opened in 1964′ 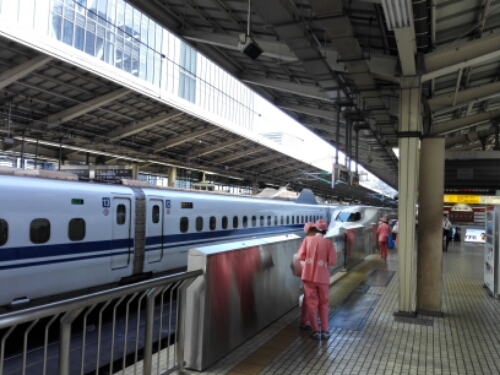 Shinkansen, by being on a designated line build for high speeds, can run at top speeds for long periods of time. Unlike the old Japanese railway lines, the shinkansen lacks inclines, corners and level crossings. Obstacles are avoided through tunnels or viaducts, not by passing around like the older lines.

I got up today around 10 am, packed and left my airbnb-apartment. It is very hot in Tokyo today, and carrying my suitcase around was quite an hazzle. I quickly found a coin locker at Ueno station, left my suitcase and spent some hours exploring Ueno, my favorite part of Tokyo. I hadn’t bothered to check the time table for the train, shinkansen runs all the time. Between Tokyo and Osaka there are at peak hours 14 trains operating in every direction, each train containing 16 cars. Missing your train is suddenly no problem. 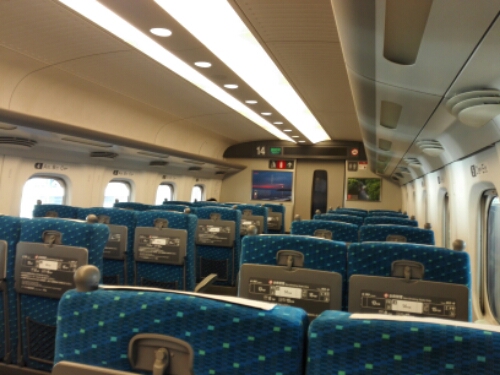 The inside of the train

My plan was to leave Tokyo around three o’clock, I got tickets for a train at 3.30. Train tickets in Japan can be quite expencive, but Japan Rail has a great deal for tourists. With a Japan Rail Pass I can ride as many trains as I want for two weeks, the price being close to the price for a return ticket from Tokyo to Osaka. If you are visiting Japan, make sure to take advantage of this offer. Japan Rail Pass must be purchased before you enter Japan and can be bought for one, two or three weeks.

Shinkansen is also known for its safety. Since it began operating fifty years ago, having carried over 10 billion passengers, no fatalities due to collision or derailment has ever happened.

Its safety record got a blemish in June however, as a man killed himself on the train by pouring gasoline over himself and setting himself on fire. The ensuing smoke choked another passenger to death. This was the first fire in shinkansen history.

Several blind spots in the safety system were discovered. For example, when the train stopped, electricity was shut down on that portion of the track. This also shut down ventilation inside the train, causing the cars to fill up with smoke. 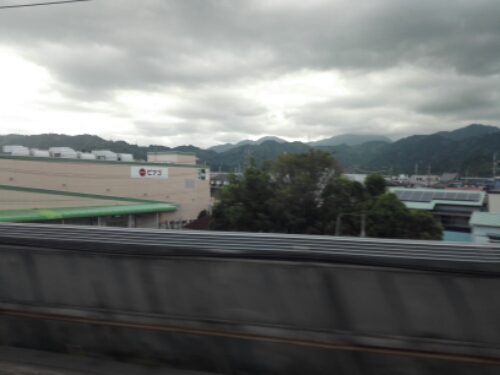 Views from the train are not always great.

It will be interesting to see how Japan Railways tackle these issues. Baggage checks and x-ray scans are apparently not going to happen, as it would slow down the speed and ease of taking a train.

In three hours I will be in Osaka having travelled about 500 kilometers.

Taking the shinkansen is such a comfortable and memorable train trip. Especially from Tokyo to Osaka with the view of Mount Fuji for a while. Unfortunately, clouds blocked the view today. Now I will enjoy my Kobe beef bento box and catch up on writing in my travel journal.

Have you taken any great train journeys? Or maybe the shinkansen? Please share your experiences.