I visited the Genbaku (A-bomb) Dome in Hiroshima in March 2014.

On August 6, 1945, an atomic bomb was used in war for the first time in history. At 8:16 in the morning, the uranium-type bomb ‘Little Boy’ exploded over the city of Hiroshima, Japan. The destruction was massive.

Little Boy had its uranium divided in two, and used an explosion of gun powder to make the two parts crash into each other and reach critical mass for a nuclear chain reaction. This chain reaction in only one kilogram of uranium caused a nuclear explosion equal to 16 kilotons of TNT.

Seconds after the explosion a fireball 280 meters in diameter had formed, then followed intense shoch waves of heat and radiation. 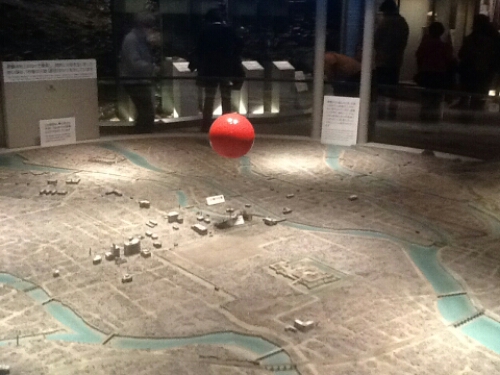 Model of the city and the fireball a second after explosion. 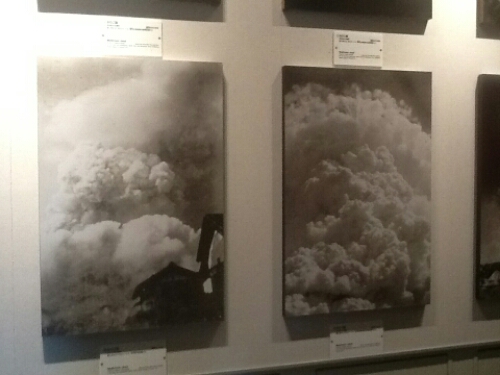 Pictures of the nuclear cloud.

Within an area the radius of two kilometers all wooden houses were completely destroyed. A few houses made of reinforced concrete were still standing. Within 600 meters from the hypocenter, roof tiles melted to form glass-like bubbles on its surface. The explosion ruined 70% of Hiroshima’s buildings, severely damaging another 7%. 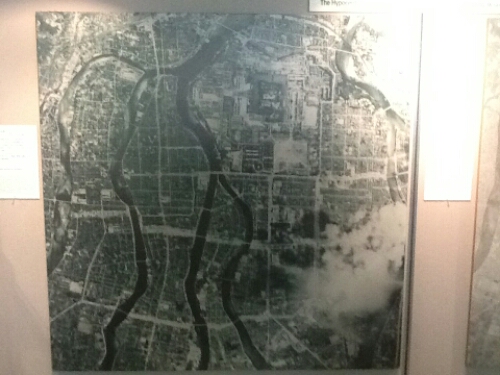 Picture of the city before the bombing. 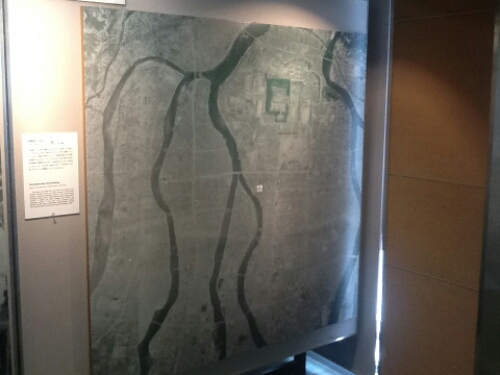 Picture of the city taken after the bombing.

The Genbaku, or Prefectural Industrial Promotion Hall, stood only 150 meters from the hypocentre of the explosion. Miraculously it survived almost intact. Being so close to the explosion, the shock wave hit the building from above instead of sideways, which would have demolished it for sure. 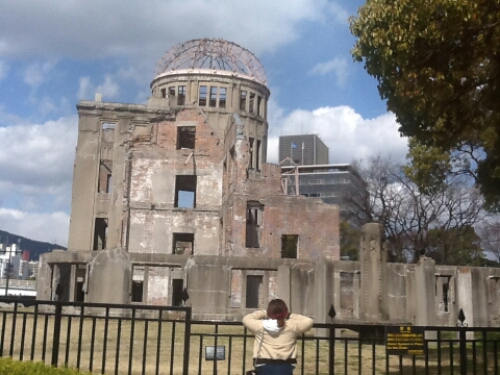 After the bombing, the ruin was named Hiroshima Peace Memorial, but is often referred to as the A-Bomb (Genbaku) Dome. This was the name local citizens gave the dome after the bombing and the name stuck. Today it is on the UNESCO World Heritage list. 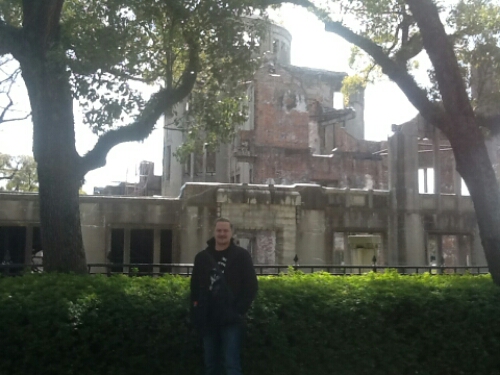 In front of the A-Bomb Dome.

The A-Bomb Dome was one of the first sights I saw in Hiroshima. We had arrived the day before, gone out to eat, had a few beers and called it a night. The next morning we set out to see the Dome and the rest of the monuments to the bombing. We lived on the other side of the city center, it was a half hour walk to the Dome. After a few detours, mostly not intentional, we finally saw the Genbaku.

Hiroshima itself is a busy city. Its streets filled with shoppers, gawkers, tourists. Almost every store needs its own loud advertisement blasting out from speakers it seems. Cars fill the streets as well. The four lane highways through the city are packed. Where traffic in Tokyo is hidden away on expressways raised over the ground, cars in Hiroshima has to travel at street level. This only adds to the noise. I found Hiroshima noisier than Tokyo in many ways. 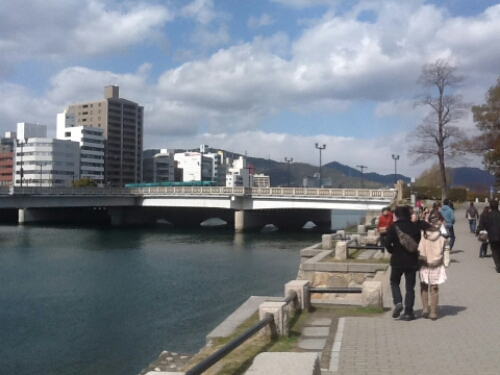 View of Aioi Bridge from the Dome. The bridge was what the bomb was aimed at.

As soon as we came to the Genbaku and the Peace Memorial Park though, everything got more quiet. No loud advertisements, people spoke in a softer voice, traffic was far away. It was a general sense of peace and reflection in the area.

It made quite an impact to see the dome up close. It was still standing, mostly intact, surrounded by bricks and rubble that had fallen down. It’s roof had caved in. Exactly as it was in 1945. It made it all so real. The destruction, the mayhem. A whole city destroyed. Trying to imagine the massive fire ball exploding only some hundred meters from here. The intense heat, the raging inferno. A temperature of thousands of degrees. 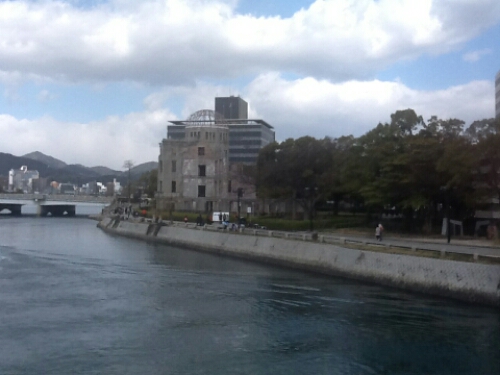 The building still stands, but what about all those who were in it at the time. Their lives gone just like that. One minute alive, the next minute burned to death. In a way those were the lucky ones, instant death instead of a short life in pain and agony on a fasttrack to dying. The bomb had laid waste to Hiroshima, the death count had to be huge.