No trip to Tokyo for me is complete without a visit to The World End. A wonderful little Irish pub located just across the road from Ueno Station. It is easy to spot, it is on the second floor of a bright red building. 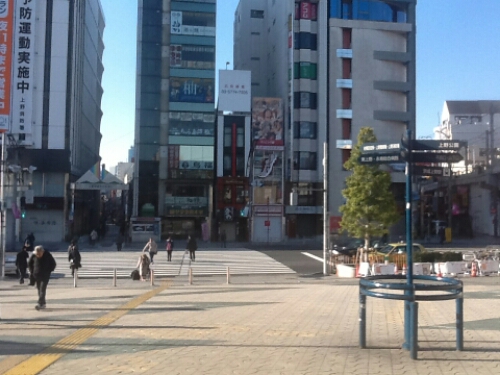 The World End is easy to see

I discovered The World End on my first visit to Japan, in October 2012. I was waiting for my friend at the hotel, we had spent the day by ourselves and agreed to meet at the hotel at 7 pm. It was 7:30, I was bored and restless. I remember passing the bar in the red building, it was impossible to miss. I left a note for my friend that I had gone for a beer, and headed off.

The entrance to the bar is up a narrow spiral staircase. I had just started ascending when I noticed two guys carrying a girl in a wheelchair down the stairs. I dutifully went down again, to let them pass. They dutifully walked back up the stairs to let me first pass. 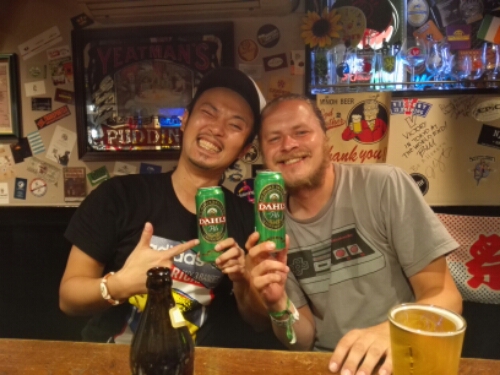 The owner, myself and Norwegian beer

We were stuck. I refused to move, they refused to move. No way I was not going to let someone in a wheelchair go before me. And they must have been thinking the same of not letting a foreigner pass, I don’t know. The end result, we must have been standing at each our end of the stairs for over thirty seconds, was that I caved in, I walked up the stairs. I did not give way to a wheelchair. It did not feel good.

I got a seat at the bar, ordered a beer. The bar wasn’t large. A few tables, some seats at the bar as well as along the wall in the narrow hallway leading to the toilets. 30 patrons would quite crowd the place.

An American was sitting on my left, we quickly started talking. At first it was a pleasant conversation, after a while I started feeling something was weird. He started repeating the same questions he had already asked. I dutifully answered, maybe he simply had forgot.

When my friend arrived, he had found the bar easily, and I was for the third time asked the same questions I felt a bit snubbed. Wasn’t he paying any attention. Did nothing I said to him stick? I didn’t want to keep repeating the same answers forever. As my friend and the American kept talking I slowly eased out of the conversation, instead using the time to write in my travel journal. 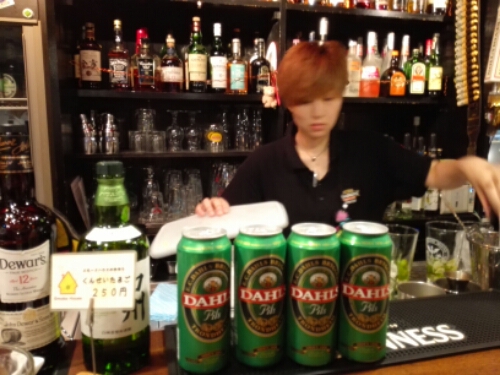 This time I brought beer from my city in Norway. Dahls

The American left eventually, he was going to the Hard Rock Cafe to eat. His third meal there since arriving in Japan three days ago. We could not believe he would go to the Hard Rock Cafe for a dinner three days in a row while in Japan. There are so many good restaurants here. If you want a burger, go to a Japanese burger restaurant, not a chain. I later got to know a chef working at Hard Rock Cafe, met him at The World End actually, one of the first things he said to me was: Don’t go to Hard Rock. Go to Japanese Resutoran.

I have been to The World End many times since that first time. I have gotten to know the staff working there quite well, many of them I consider friends. On my second trip to Japan they even threw me a welcome party. They closed the bar and had a private party for me. The first beer I was served was a Norwegian one as well. Nøgne Ø. 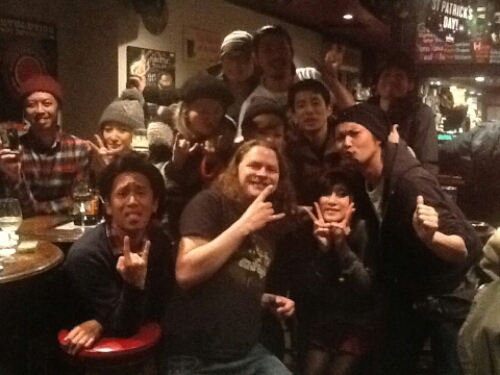 I visited The World End several times during my last trip to Japan, but the night that really stands out is my last night in Japan.

It has become a tradition to have a farewell party at The World End before I go home. This time many friends came, both old and new. Having people who I have just met, coming across town just to say goodbye to me is really moving. Several people came to see me off this time, it was a great evening with good beer, tasty food and lots of talking. I was given a bottle of some kind of spirit from Okinawa from one of the bartenders and a Japanese craft beer brewed in only 90 bottles from the manager. At that point I was almost crying. I brought some Norwegian beer for my friends to try. 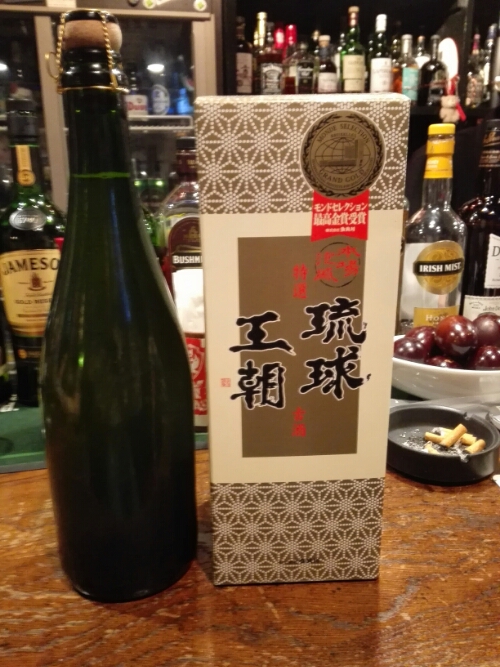 It was a night I will always remember and next time in Japan I will be certain to uphold the tradition.

The World End is a great bar. It has a very relaxed atmosphere and a good mix of Japanese, tourists and expats. It is very easy to find somebody to engage in a conversation with.

The World End offers a large selection of both beer on tap and bottle, and change their beer menu regularly. The service is excellent. They even have a tasty selection of pub food. I always keep coming back.

4 thoughts on “The World End bar in Tokyo”