This time in Tokyo I didn’t visit Tokyo Skytree, I have been there twice before. It was a bit cloudy on my first visit, I had to visit again on a sunny day. 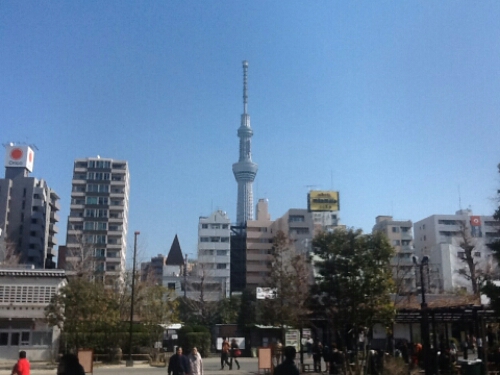 Tokyo Skytree opened on May 22, 2012, and is the largest tower in the world. At 634 meters it is the second largest structure in the world. It functions as a broadcasting tower for the Kanto region as well as an observation tower. There are viewing platforms at both 350 meters and 450 meters.

I went there first with a friend in October 2012. We were in Asakusa where my friend, a drummer, was visiting a drum museum. Tokyo Skytree is only a rickshaw ride away. 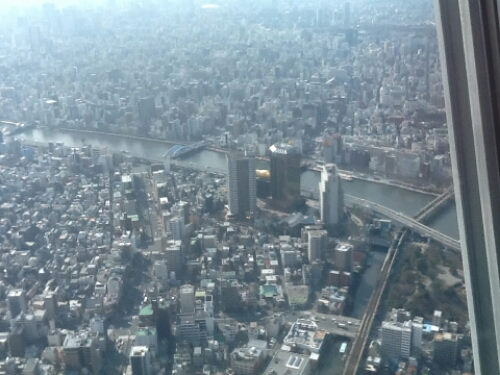 View of Tokyo from Skytree

A very nice man with very good english took us in a rickshaw from Asakusa to the tower, giving us a great tour on the way. All the sights were pointed out and their story told. He dropped us off outside a sushi restaurant right in front of the tower. We were hungry and needed something to eat before we went up. As usual we got great service and the sushi chef loved that I was from Norway. That was also usual. ‘Norwegu Sarumon! Norwegu Sarumon!’ He would yell. Norway is well known in Japan for its salmon. 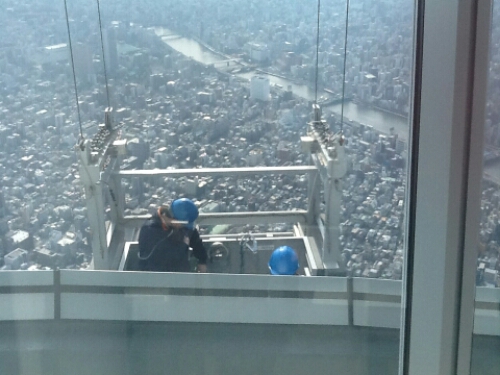 Quite a scary job 450 meters above the ground

The elevator ride up was quick, my ears popped. Our altitude was shown on a screen. The number of meters went up very quickly.

We reached the top and walked out. We instantly had a view of Tokyo. We spent some time taking in the view, the outer walls were of glass, and you could walk all the way around, getting a 360° view of Tokyo. The view was great, but it was a cloudy day and we could not see far into the distance. 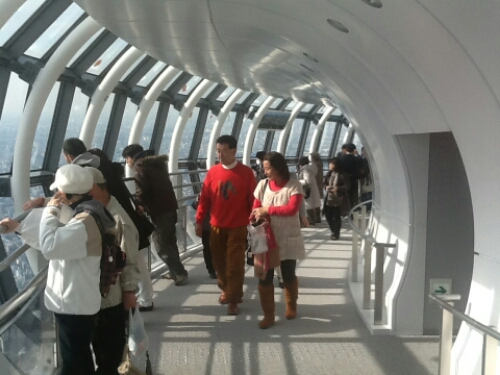 We then took the elevator up to the top, 450 meters above the ground. Now we were above some of the clouds, our view was obscured. We could see some, but far from the view we could have seen.

My second time in Japan I revisited Tokyo Skytree, it was a sunny day, not a cloud in sight. The first thing I noticed this time was the line. On our last visit we could go straight to the elevator, this time the line was hundreds of meters long. I guess Skytree is much more popular on sunny days and I can understand why. 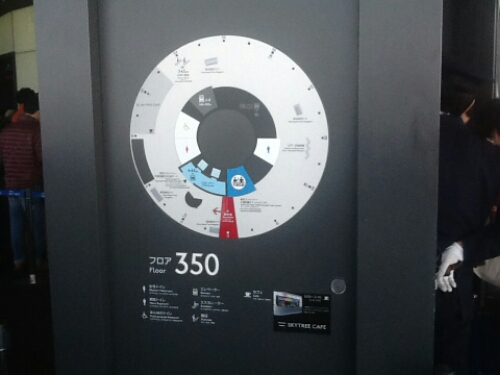 350 meters above the ground

This time the view was spectacular. Buildings as far as you could see, the size of Tokyo metropolis is impressive. You cannot see the end. Just concrete and high-rise and apartment buildings. Neon lights, elevated motorways packed with cars, trains. Streets crowded with people. And far in the distance Mount Fuji. The view was so much better than last time, no clouds really made a difference, and the place was so much more crowded. 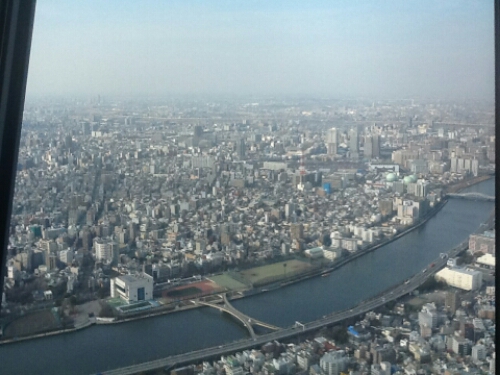 Tokyo Skytree offers a great view of Tokyo and lets you really see its impressive size. If suffering from fear of heights, going would not be a good idea, for the rest of you I strongly recommend a visit. On a sunny day, the line moves fast anyway, the view is just fantastic. A visit is easily combined with a visit to Asakusa, and get a rickshaw ride with an english-speaking guide to get there. You will have a great guided tour as well.