I visited Matsuyama Castle in July, 2015.

On top of Katsuyama Hill, overlooking the city of Matsuyama, stands Matsuyama Castle. It is easily spotted from almost anywhere in the city, and gives a good vantage point above Matsuyama. In feudal times it must have been easy to defend from such high ground. 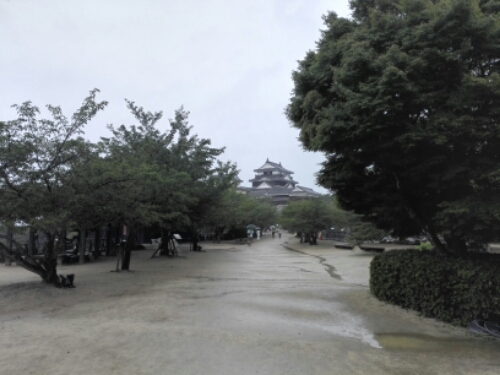 Matsuyama Castle was constructed by order of Yoshiaki Katoh in 1602. After a successful career in the army of Hideyoshi Toyotome, Katoh was appointed lord of Masaki, the neighbouring town of Matsuyama, in 1583. In 1603 he and his retainers moved to Matsuyama and the castle under construction. 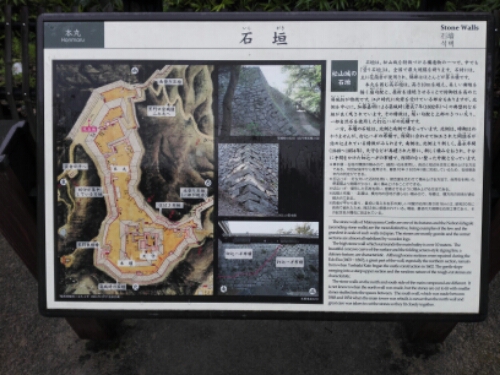 Map of the castle and walls

In 1642, the impressive five story main tower of the castle was rebuild and reduced to only three stories. On New Year’s Day, 1784, lightning hit the main tower which burned down in the ensuing fire. Reconstruction wasn’t finished until 1854.

I paid a visit to the castle on my way back from Dogo Onsen. It was still a few hours until my train left, I had plenty of time to visit the castle.

The castle is easily reached by both a ropeway and a chair lift. As it was raining on my visit, the chair lift which would have you sitting in the rain wasn’t operating. Only the ropeway. The rise up to the top was only a few minutes. There was a Japanese guide, but I didn’t understand a word. 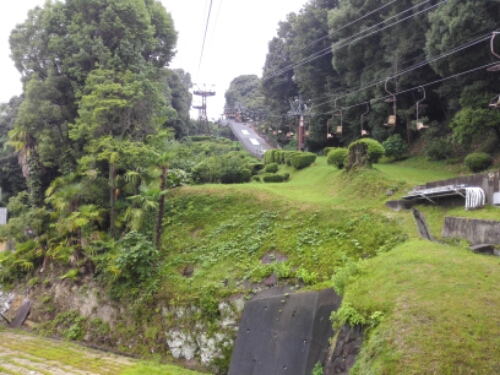 Getting ready to ride up to the castle

At the end of the ropeway there was still a few minutes walk up to the castle. Several gates serving different defensive purposes had to be passed, and all the way you had to walk along the wall, making it easy for defenders to bombard attackers with arrows, hot water or heavy objects. 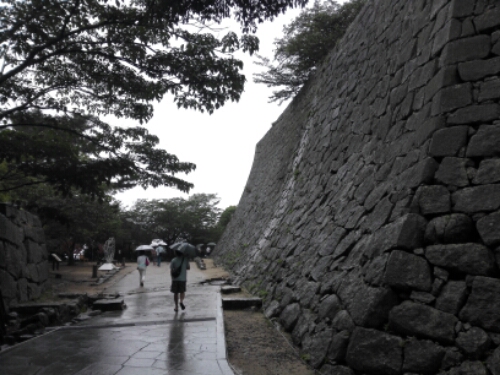 The walls were impressive

I knew I was close to the entrance when, as always in Japan, I saw vending machines, a restaurant and a souvenir shop. No proper Japanese Castle can do without those close by the entrance.

During the Meiji restoration, castles all across Japan were destroyed, torn down, demolished. The intense bombing during the Second World War destroyed many more. Some of the castles have since been reconstructed, but the reconstructions does not always do them justice. 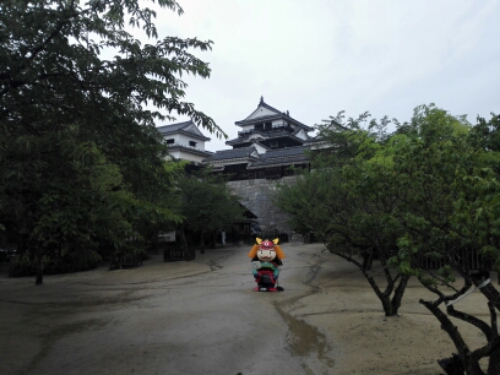 There is always something that feels misplaced in Japan

Matsuyama Castle, just like Himeji Castle, survived both the Meiji Restoration and the Second World War almost intact. When power passed to the emperor during the Meiji Restoration, the lord of the castle found himself on the losing side of the conflict. Instead of fighting on, Lord Matsudaira surrendered the castle and let himself been taken prisoner, sparing the castle from the destruction of war.

Arson damaged the Small Tower as well as several turrets in 1933, and several of the gates were destroyed during the bombing in the Second World War. The main tower remained standing and is one of the few original castles still standing in Japan today. 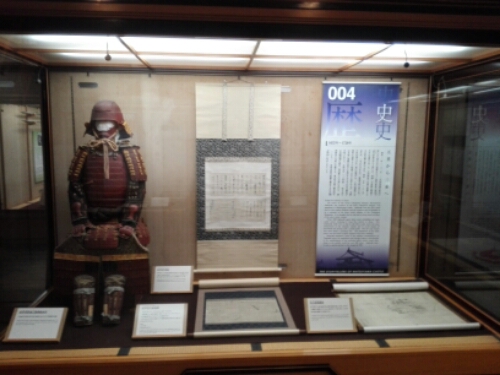 Seeing an original castle was impressive, although I had only the day before visited Himeji Castle, another original castle. Matsuyama Castle was smaller but also much less crowded. In Himeji Castle you walked in a line through the whole castle, always surrounded by a crowd. In Matsuyama Castle there were fewer people, a lot less crowded and you were free to walk around more freely. It felt less touristy.

I spent about an hour inside the castle. Several old artifacts, scrolls, weapons and armor were on display, and big posters told the history of the castle. For someone interested in history like me, this was a great place to visit. A history exhibit inside an ancient castle. 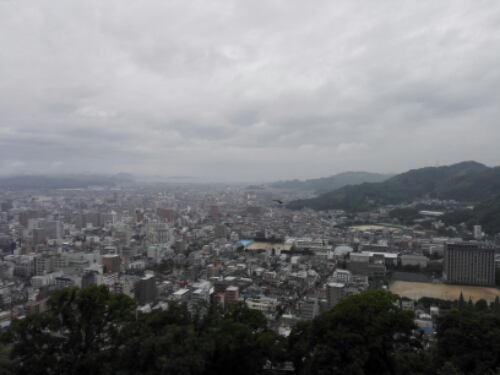 View from the castle

From the top floor of the castle there was a great view of Matsuyama. With only half a million people it is a small city by Japanese standards, but for a Norwegian, the size is still impressive. 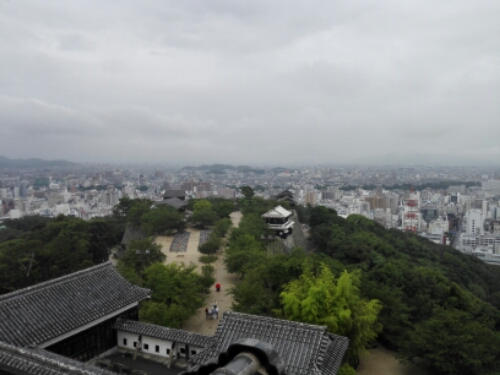 Matsuyama Castle was given to the city of Matsuyama in 1923 and it has remainded in the city’s ownership since. After the Second World War, efforts to restore the castle to its full former glory has been put in place, but there is still work left to to. The city of Matsuyama says the Castle will be fully reconstructed and restored at some future date. The castle today still is impressive though.

Most people opted to take the ropeway down from the hill, but as that would take me away from the train station I decided to walk down the road in the other direction. A few kilometers of downhill walking through the forest. It was so quiet, so peaceful. Hard to belive I was in the middle of Shikoku’s biggest city. 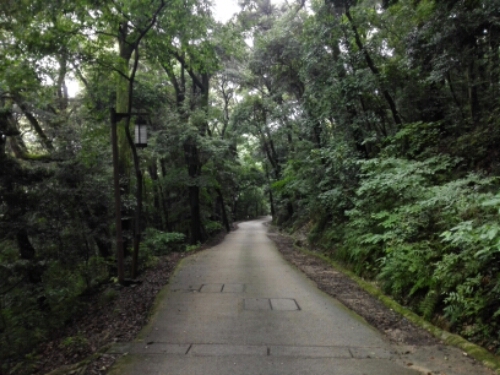 Walking from the castle

I eventually reached the train station and took a train back to Okayama. I was tired but satisfied. My trip to Matsuyama had been very successful. Dogo Onsen was very relaxing, the Dogo beer was very good, and Matsuyama was an impressive castle.

Back in Okayama, my last night in the city, I headed to Aussie Bar for a beer and a game of chess.

I also visited Dogo Onsen and Dogo Biiru Kan Brewery while in Matsuyama. 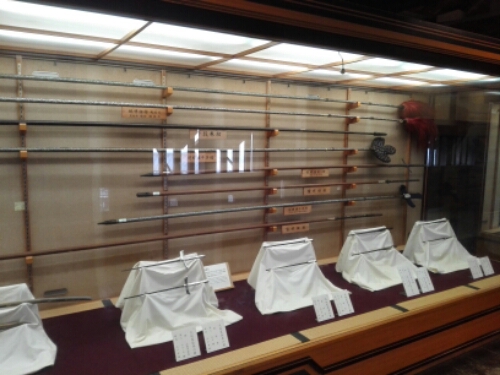 On display inside the castle