We were told that it could be windy at the top, a typhoon was approaching. Occasionally we could feel the tower sway, but only slightly. The typhoon had not hit yet. 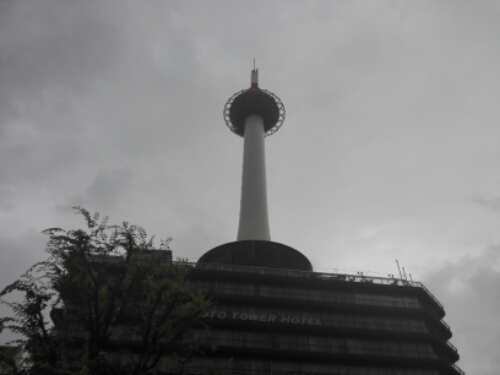 We had just arrived with the shinkansen from Osaka, were spending two days in Kyoto. As we arrived at Kyoto Station we still had an hour until check-in. We decided to visit Kyoto Tower.

Kyoto Tower was built in 1964, planned to correspond with the Summer Olympics in Tokyo, but not finished until December that year. It is the tallest building in Kyoto, the observation deck is at 100 meters, the top of the spire reaches up to 131 meters. 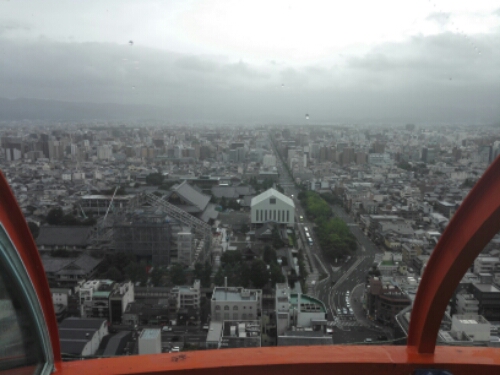 In its first year of opening it saw over a million visitors, but since then numbers have diclined by over half. Its observation deck gives visitors a 360° view of the city.

Kyoto is amazing when seen from above. A great urban sprawl in almost all directions, on one side the mountains covered with shrines. The Imperial Palace. All the temples scattered among the modern buildings. On my first visit I spent a long time just watching the taxis waiting to pick up passengers at the station. So organised, so Japanese. 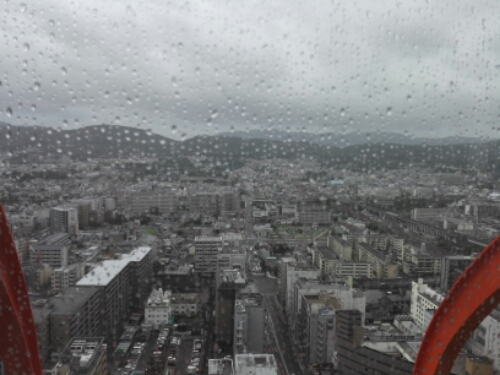 The rain ruined the view a bit

It is no surprise that the view is better in clear weather. On my first visit it was quite clear, on my second visit the typhoon was incoming, it was cloudy, a bit of rain. The view was obstructed. You could not see far. Still, we could see the city, the imperial palace, most of the shrines. My friend, who had never been to Kyoto before, still got a good view of the city. 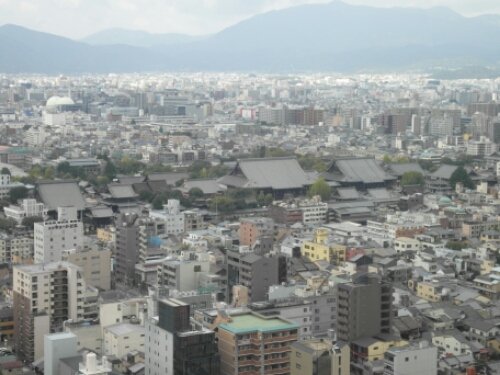 View of the Imperial Palace.

Kyoto Tower is situated just opposite Kyoto Station. The entrance is through a huge souvenir store, if you are looking for souvenirs this is a good place to get them. On the top there is a good view of the city, many binoculars that can be used for free, and the main sights are marked out on the window and easy to spot. 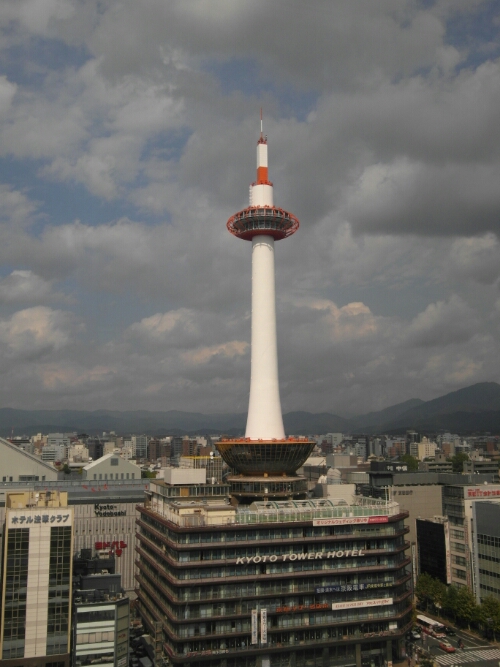 Public opinion on Kyoto Tower is divided. Many people feel that the tower is too modern for the old city of Kyoto, and with regulations limiting the height of other building in the city it stands out, towering above the cityscape. Kyoto Station too is a modern building, the first things people arriving in Kyoto see is the station and the tower, a view not comparable to the rest of Kyoto. Many people feel this is the wrong way to welcome visitors to Kyoto.

I can see what they mean, but personally I like the tower. 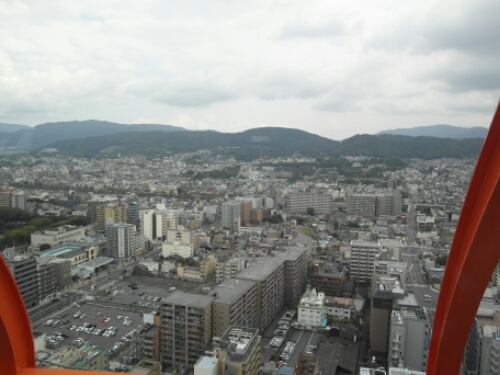 Kyoto with the mountains in the distance

What I love about Japan is how random the cities seem. You can go from modern business district to serene shrines and beautiful parks just by crossing the street. Nothing seems planned, everyting is mixed together. A modern tower, even though its modernity has faded over the years, it has an 80s-feel to me, feels right at home in Kyoto. I think it is a nice way to first see Kyoto, especially from the top.

As we got down to ground level it had stopped raining. We found a taxi to take us to our hotel. We did not know it yet, but that evening we would find ourselves in the middle of the biggest annual festival in Japan, The Gion Festival. 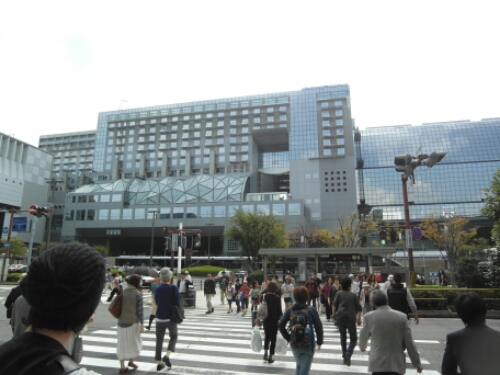