I visited Fuji Rock Festival and rode the Dragondola in July, 2015

Going over the mountains, then down into the valleys, was quite the experience. Not something for people who are scared of heights. The angle it went up and down the mountains was quite steep. You got the most perfect view of the the festival and the mountains of Naeba during the ride. 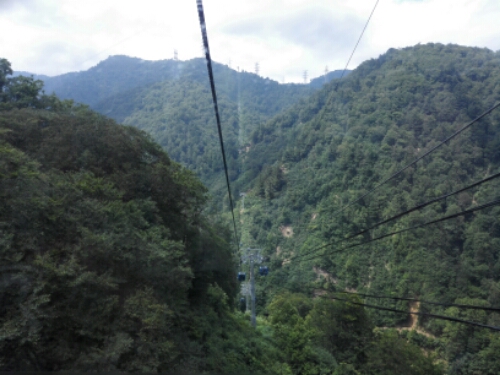 Passing over the mountains

The mountains were beautiful. First we would ride over tree covered mountains on the way to the top. At the zenith we had a great view of the mountains around, then you would plunge back down the mountain. At the bottom there would be a beautiful stream meandering through the forest. I was half-expecting to see a bear hunting for fish there. Except the gondola, no signs of human activity. Then the gondola would start ascending again. 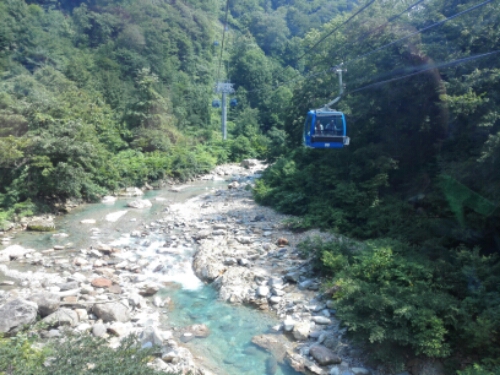 Passing over a beautiful stream

How many mountains we passed I am not sure of, the trip took about 15 minutes. And it was hot, so hot. The best was to stand up to catch the little air flowing through the tiny open window. Sitting down again and it did not take long before it got too hot. 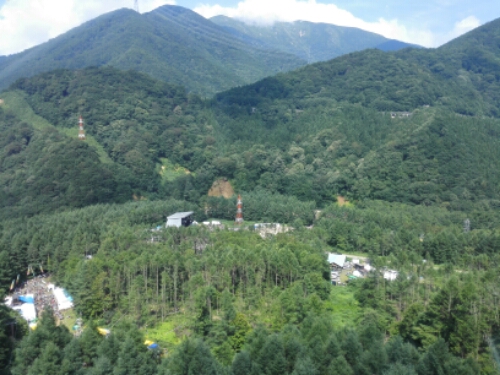 Part of the festival seen from the Dragondola

Fuji Rock Festival covers such a huge area, one part of the festival is only reached by taking the Dragondola, at 5.5 kilometers the longest gondola lift line in the world apparently.

At the end of the line lay the Daydreaming stage, blasting out techno, but there was also a more chilled out area with plenty of tables and chairs, and the opportunity to take a nap under a tree. 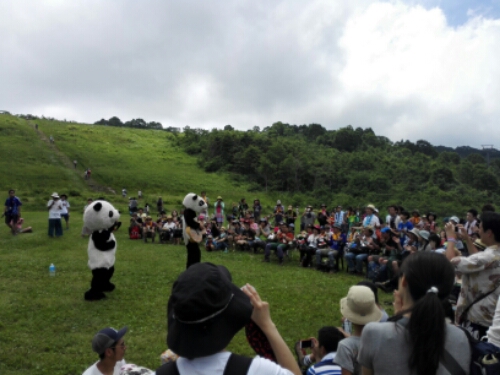 It was a lot more windy on top of the mountain. Not so hot. I got off the gondola, took a walk around. A band dressed as pandas were entertaining the kids, a DJ was playing at the Daydreaming stage, people were dancing. Not the kind of music I would associate with daydreaming. There was a restaurant and a fast food stand. I bought a bowl of fried chicken and a beer, found somewhere to sit down, ate my food. 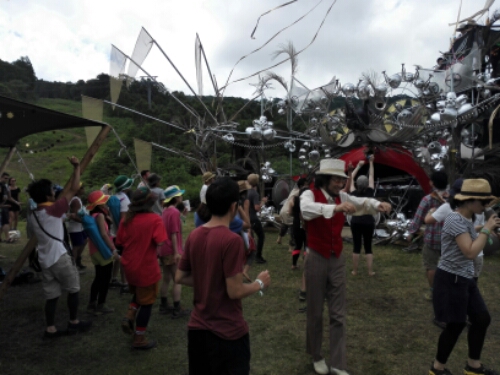 Only the Dragondola could take you up here

I did not stay long, the techno being played was not quite my thing. I enjoyed the view for a while, got back in line for the gondola ride back down. 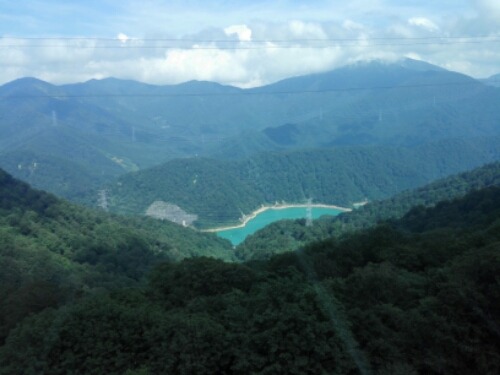 The mountains of Naeba were beautiful

On the way down I got into the gondola with a family of three, the kid only a year old or so. As soon as we started moving, the gondola went over the edge, down the mountain side, the kid started crying. He cried the whole way. Not just a quiet sob, he was screaming. Red in his face, sweating, screaming on top of his lungs. His parents tried as best they could to calm the kid down, to distract him. Nothing worked. Soon I would try to help them as well, talking and singing to the kid. It did not work. 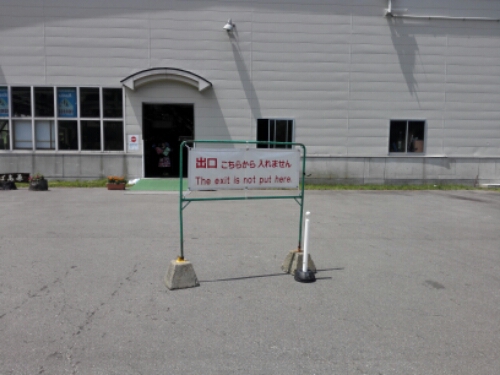 This was the exit

The whole way back he cried, his parents felt so bad, constantly telling me how sorry they were. I tried to tell them not to worry, but I don’t think they understood. When we got down and exited the gondola they kept bowing and apoligising. I smiled, telling them not to worry.

As I walked away I turned around one last time, they were still standing there, bowing to me. Sometimes Japanese politeness can be a bit too much.

This is my seventh out of eight posts about Fuji Rock Festival. My previous post was A Festival the Japanese Way and the final post is The Long Way Back to Tokyo.

For all my stories from the festival see my Fuji Rock Festival Page.