I went sightseeing in Reykjavik in April, 2010

It was April, still quite cold. I was still wearing my winter jacket. I thought it would be warmer here by now.

I was walking through downtown Reykjavik, towards Tjörnin, the lake in the middle of the city. It was my first day in Reykjavik, my first trip here since childhood, I was taking a walk around just to get mental map of the place. Doing some sightseeing in Reykjavik. 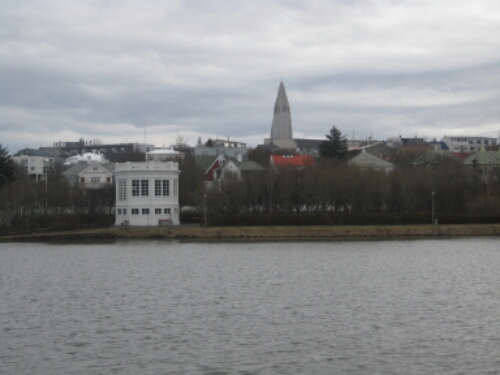 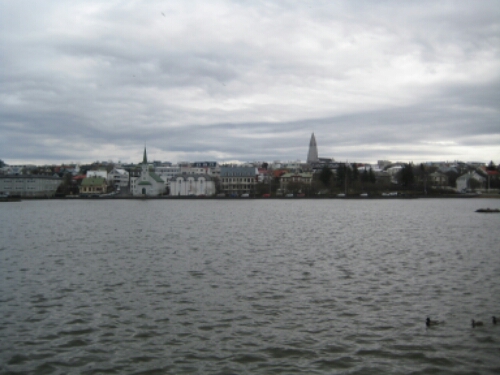 Not many tourists were in Reykjavik at the time, a lot of TV-crews though. The Icelandic volcanic eruption had just stopped air traffic in almost all of Europe.

We actually saw the ash cloud created by the volcanic eruption the next day. American newspapers had reported in disbelief that the people of Reykjavik were able to continue with their lives, that stores were open, people out and about. They thought the city would be covered in ash. But the wind direction blew the ashes away from Reykjavik, towards the rest of Europe, and in Reykjavik it felt as if nothing had happened really. People claimed the ash could could not even be seen from Reykjavik. 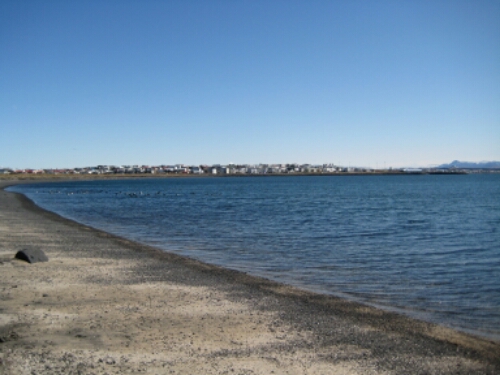 We had taken a trip out to Seltjarnarnes, just northwest of the city, a nice park by the water, when we saw the ash cloud to the east of us, standing straight up from the mountain. It was a very clear day. When we returned to the city, people did not believe us, you could not see the eruption from Reykjavik. We claimed otherwise, we know what we saw. 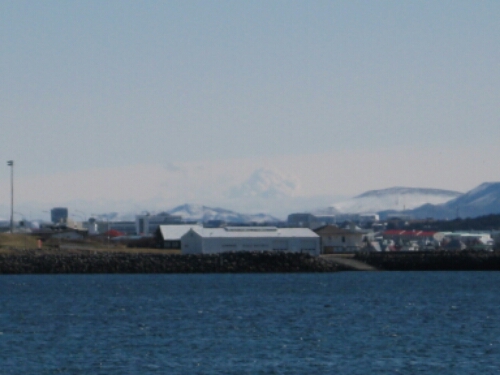 The ash cloud in the distance

I walked around Tjörnin, it did not take long. A beautiful walk though. The peaceful lake, geese swimming, a park around the lake. Reykjavik is a beautiful city. Perfect for walking. Waølking is perfect when sightseeing in Reykjavik.

Next to Tjörnin lies the City Hall. Not much to see really, except a really cool 3D map of Iceland inside. It is quite large and gives you a good view of Iceland, how most of it is glaciers and barren landscape, the few people congregating by the shore. I spent some time examining the map, I have always had a thing for maps. 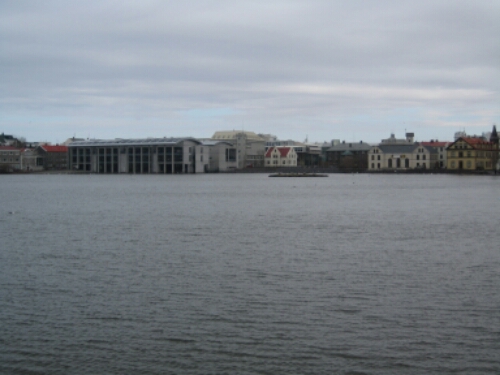 Tjörnin with the city hall in the background

Most Icelanders live by the coast, the inland in Iceland is hardly populated. In fact, Reykjavik and the surrounding urban area accounts for about 60% of the population of 329.000. 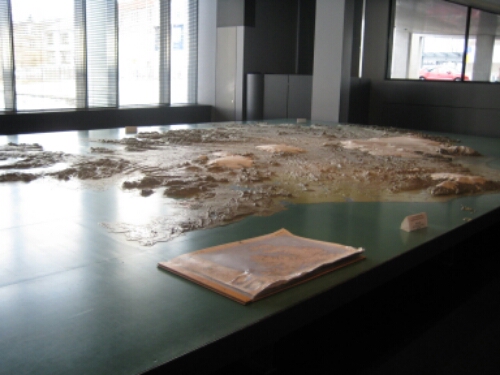 The map of Iceland

—
I head over to the harbour nor far away, watching the old fishing and whaling boats lying there. Fishing has always been important in Iceland and still close to 40% of export earnings come from fishing, and the industry employs 7% of the population. 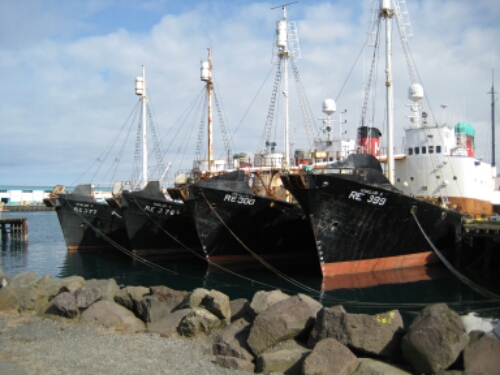 Today many of the boats are left at harbour. Some are turned into tourist boats, offering whale safaries and trips out to sea. Some of the boats looks ready to be scrapped, rusty and old. The harbour area is big, reminding people of how important fishing has been to Iceland, before they became financial speculators. 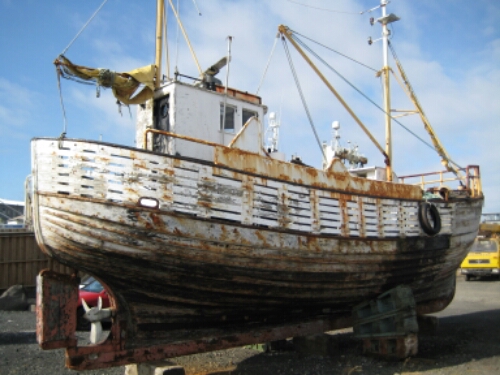 No trip to Reykjavik is complete without a visit to Bæjarins Beztu Pylsur, a hot dog stand in the city supposedly serving the best hot dogs in the world. Famous visitors include Bill Clinton and Metallica. I went there for lunch one day. 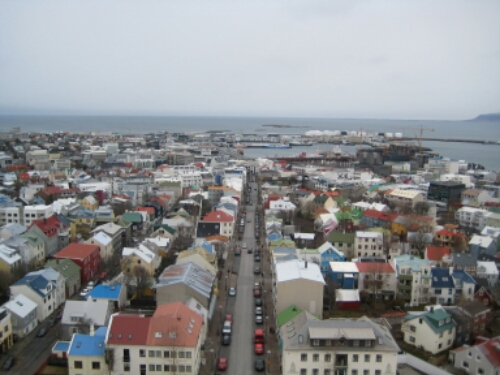 View of Reykjavik from Hallgrimskirkja

Lunchtime at Bæjarins means waiting in line. Business men from all over the city flock towards the food truck at lunch hour. There were about ten in line when I got there. I waited patiently, hoping it was worth it. 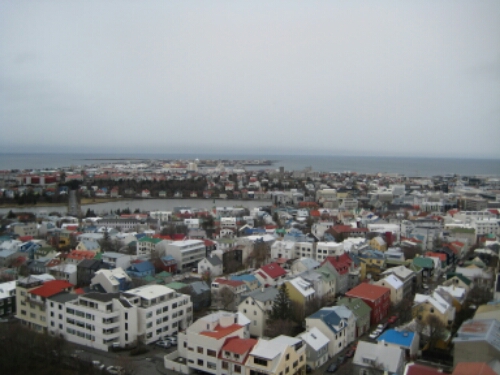 Reykjavik and Tjörnin seen from Hallgrimskirkja

I bought myself two hot dogs with everything and a coke, sat down on one of the benches nearby to eat. Whether it was the best hot dogs in the world I am not sure, it was good but I am sure there are better hot dogs out there. It got me full and it tasted well, I was happy.

I finished my tour of Reykjavik in Hallgrimskirkja, the Lutheran church of Reykjavik, easy to see as it lies on the highest point downtown. From the belltower you have a very good view of Reykjavik, the harbour, the ocean. It was quite windy at the top though, I did not stay long, just enough to take in the view. Reykjavik is a beautiful city, a city I am sure I will visit again some day. 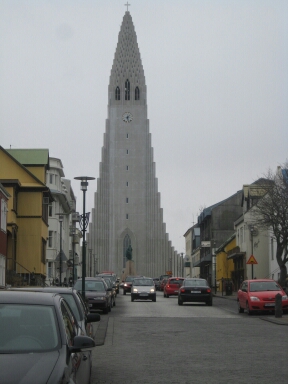 Hallgrimskirkja, a must when sightseeing in Reykjavik