I have eaten ramen on every visit to Japan. The following episode happened in Okayama in July, 2015.

It was late when I left Aussie Bar in Okayama, it had been a long night. I was tired, needed to sleep, but hungry as well. I’d heard of a ramen shop, Poku Ramen, just around the corner. It was open until 5am, perfect for a visit after some time in the bar. I headed for it. What could be a better meal before going to bed. 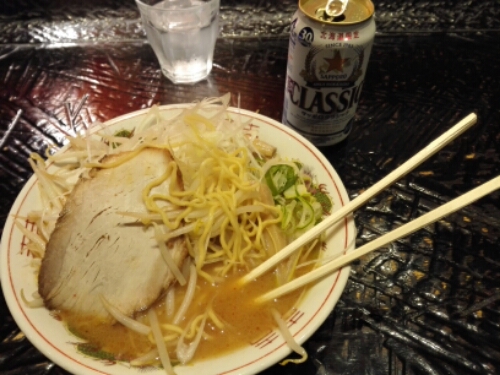 With a miso broth in Sapporo

My favorite Japanese food is ramen. Forget sushi, forget sashimi, forget tempura or yakitori. I prefer ramen. The thick, tasty broth, the perfectly cooked noodles, some vegetables, a few thin slices of meat. Maybe an egg, usually boiled but sometimes fried. The taste is amazing, at any time of the day. Morning, evening, night. It doesn’t matter, you can still enjoy a tasty bowl of ramen. 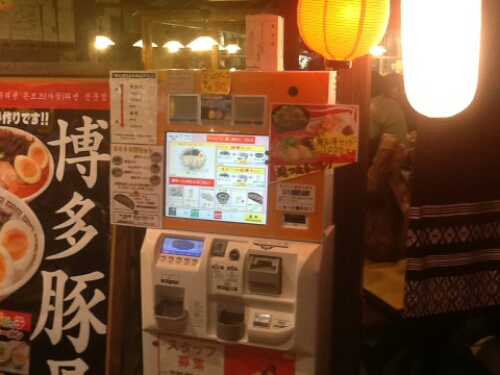 You often have to order and pay for your meal at vending machines outside the restaurant.

There have been days in Japan where all three meals I have eaten have been ramen. When in Japan it rarely goes more than two days where I don’t eat this tasty noodle soup. I simply must have it. I find myself going into ramen shops all the time, sometimes unconsciously. I’m walking around, wondering what to have for dinner. Before I know it I’m sitting by the counter in a ramen shop, a bowl of ramen and a beer in front of me.

Ramen is a Japanese noodle soup using Chinese-style wheat noodles. The noodles remain the same, the broth and toppings vary according to regional preferences.

Two popular and famous types of ramen are miso and tonkotsu ramen. 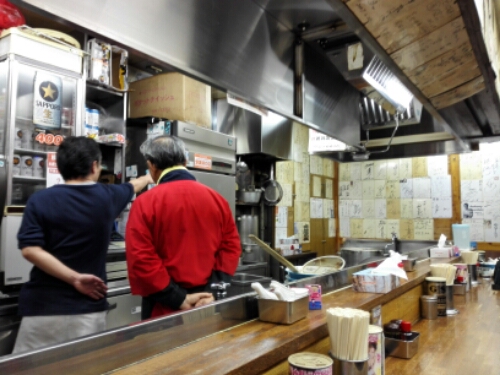 Miso ramen is Sapporo’s take on ramen, a miso based broth mixed with fish or chicken stock. This type of ramen was invented faitly recently, as late as the sixtees.

Tonkotsu ramen hails from Hakata, on the northern tip of Kyushu. Tonkotsu ramen is based on a pork bone broth, this one also mixed, either with chicken or vegetable stock.

The place was about half full, I got a seat at the counter. The menu was written in Kanji on the wall, the chefs did not speak English. An awkward silence followed. How should I order? I was just about to pick a dish at random when one of the customers spoke up. He had a rudimentary knowledge of English.

Slowly he took me through the menu, searching for the words, a lot of stuttering. You could see he was thinking hard. English wasn’t easy for him, but he got through the menu at last. I ended up ordering the garlic ramen and a beer. The chefs started cooking, I waited for my food. Watched the TV, even though I did not understand a word they said.

In Hakata I found Raumen Stadium, a food court with only ramen restaurants, each one serving a different version of the dish. I had many a visit there during my three days in the city. I did not get through all seven restaurants, but visited more than half. I never had a bad meal there. 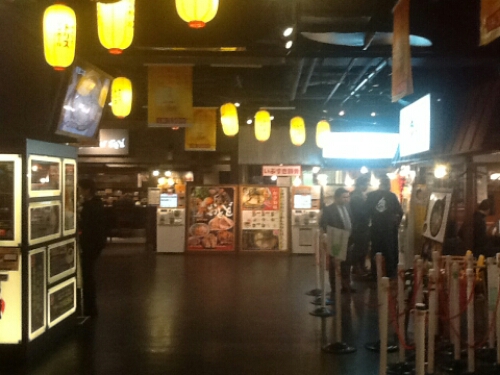 Raumen Stadium in Hakata. Seven restaurants in one place 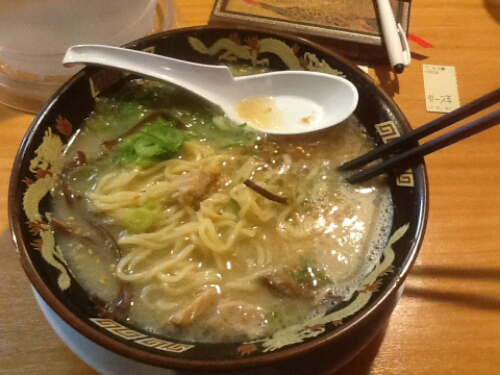 In Ueno, Tokyo, a place I have spent a lot of time, I quickly found my favorite ramen shop, a place I visited on many occations. A small restaurants, room for six by the counter, two chefs smoking in the kitchen. Food served quickly, always delicious. As it was on the way from my hotel to the train station, it was very convenient to drop in for a meal.

My food arrived, I found a pair of chopsticks, started slurping away. Slurping your ramen is compulsory in Japan, it shows you like the food and the intake of air is supposed to enhance the flavour of the dish, a bit like when drinking wine. 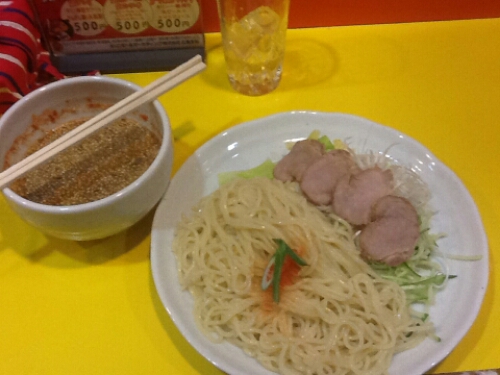 My food was very good, so much flavour in the broth, the noodles perfectly cooked. I slurped away.

Ramen’s origin is disputed, whether it came from China or was invented in Japan at the beginning of the 20th century. What we do know is that today ramen is a very popular fast food in Japan, and it is very easy to find a ramen shop in Tokyo these days. 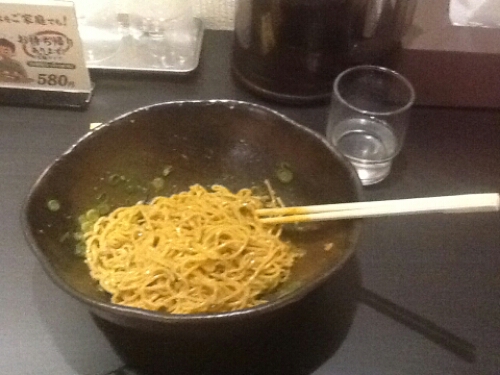 In Hiroshima. This one with no broth but a thicker sauce.

In 2015 Tokyo also got it’s first ramen shop with a Michelin star, it was about time. In my opinion the city should have many many more, and a long time ago. The day after the Michelin star was awarded people lined up for hours outside the shop for a meal. The line went on for block after block.

I finished the last of my noodles, lifted the bowl to my mouth and drank the last of the broth. Took the last sip of my beer. Signalled to the chef that I wanted to pay.

As I left Poku Ramen I was feeling good, was full, tired, ready for bed. I headed back to my hotel, a few hundred meters away. 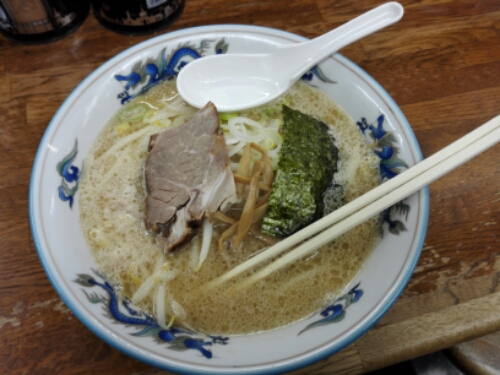 Ramen is such a great and tasty food. It works for breakfast, lunch or dinner, or if you want a quick bite between meals. It is the best hangover food I have ever found. It is served quickly when ordered, consumed quickly, and is also cheap. And still so good. The perfect food for a traveller on a budget. A cheap and tasty meal. Make sure to have some ramen when visiting Japan.

Have you ever tried ramen? If so, what do you think? And what is your favorite food? I think it will always be ramen for me, allthough soup curry is putting up a fight now. I have to go back to Japan, try them both again, then decide.