I visited Asakusa in January, 2016

I hadn’t eaten yet, had gone straight from home and to the train, then the subway before I arrived in Asakusa. I was getting hungry, was looking for something to eat.

I found a street vendor by the entrance to Nakamise-dori selling Nikuman, the delicious Japanese steamed buns with meat filling. I got two filled with pork along with a bottle of green tea. Brought them with me as I made my way through the crowds at Nakamise-dori toward the tempel, looking for a place to sit down and enjoy my breakfast.

I was spending the day in Asakusa, in the city of Taito in Northern Tokyo. Originally an entertainment district during the Edo Period, the area now caters more for tourists with the Senjo-ji tempel as its main attraction, as areas such as Shinjuku and Roppongi have taken over more and more of the entertainment industry in Tokyo. 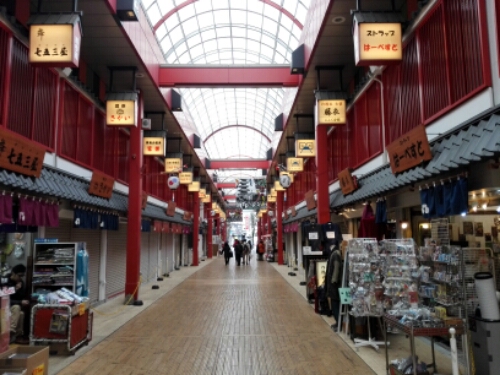 Asakusa has a more working class feel to it than areas such as Ginza or Shibuya, it looks older, there is less neon, but no quieter. The temple area is filled by both tourists and locals on most days, and the hawkers are present like everywhere else in Tokyo. In Asakusa they are joined by rickshaw drivers competing for business.

I made my way through the crowd and the souvenir shops in Nakamise-dori, entered the large open space in front of the temple, found a bench where I could sit down and enjoy my food with a good view of the temple. 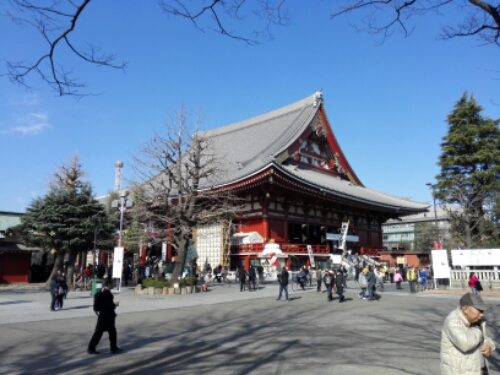 The steamed buns were delicious. The steamed bread sweet and a bit sticky, the meat still warm and very tasty. The two buns were finished way too quick, I regretted not getting a third one. I could always get one on the way back, I reasoned.

I got up from the bench, walked over to the temple. In front of the temple was a gate to walk through followed by several stalls selling various charms and blessings. A typical Japanese temple. Senso-ji temple is far from typical though. 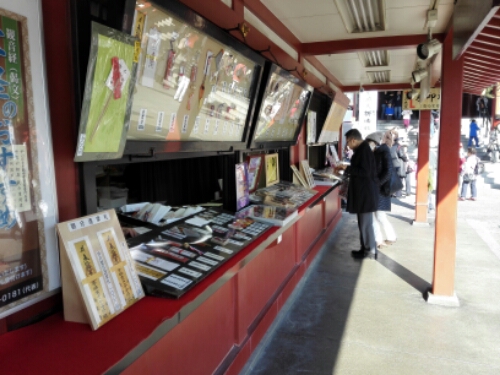 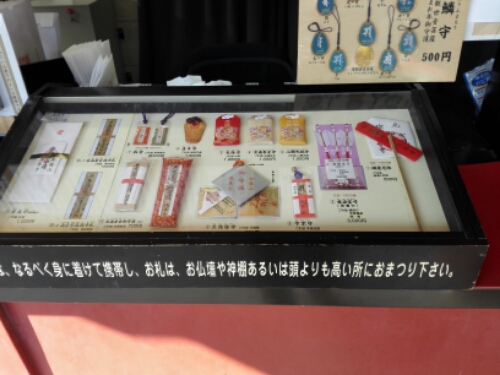 Senso-ji temple has its origins way back in 628. It was founded after two fishermen caught a gold statue of the deity Kannon in their net while fishing in the nearby village. The statue was then enshrined in Asakusa so that the villagers could pray to it. 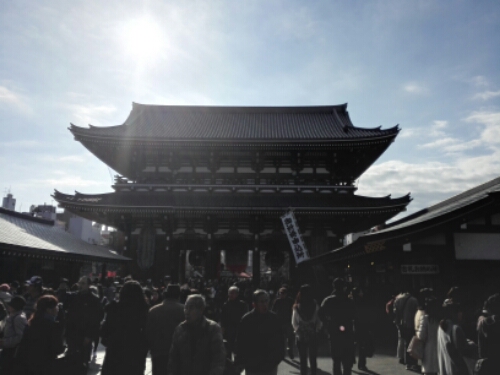 A temple was then built on the site in 645, no other temple in Tokyo is older. During the Tokugawa Period the reigning shoguns were closely connected to the temple, for some time the temple ground were only open for members of the Tokugawa family.

I walked up to the main temple building. In front of the entrance stood a large cauldron filled with burning incense. A large line of Japanese were standing there, waiting to immerse themselves in the smoke, believed to bring good health. 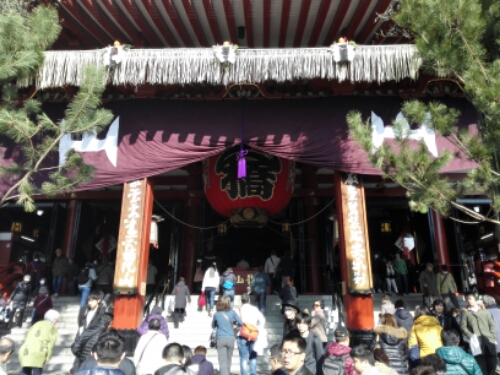 The entrance to the temple

I didn’t feel like standing in line, walked inside the temple instead. A large open room, the place for worship straight ahead. The Japanese were throwing money at the front of the shrine, a new years tradition to bring good luck for the following year.

It was only a few days after New Years Day, many Japanese had showed up to bring good luck to the coming year, quite a few of them dressed up in their kimonos. The temple was crowded.

I took the left exit out of the temple, found myself in the beautiful Japanese garden. A serene stream running through, stone bridges crossing, carps swimming in the water. Small bright orange shrines scattered through the park. I walked around for a while, just enjoying the scenery. 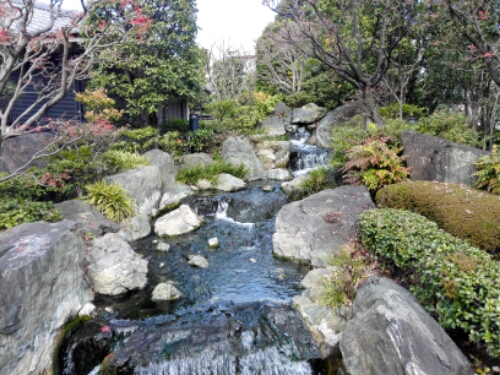 From the temple garden 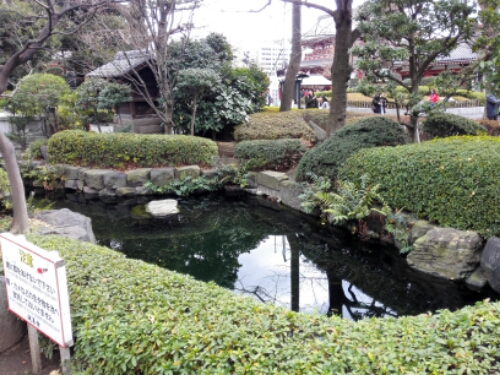 Scene from the garden

Today the temple is a major tourist attraction in Tokyo, and is also used by many locals as a place for worship. The temple of today is located about six kilometers from its original site. Like many temples in Japan it has experienced its share of fire and destruction. The last time the temple was destroyed was by allied bombing during World War Two.

In addition to the temple itself, the temple area also houses a five-story pagoda, a beautiful park and two smaller shrines devoted to those who built Senso-ji. 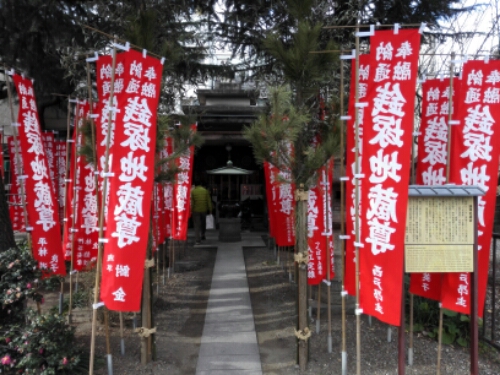 A little later, on my way back to the train station, I once again walked through Nakamise-dori. A small street leading to the temple, filled with small souvenir shops, keeping alive the old tradition of selling souvenirs and sweets to tourist. Here you can find everything from samurai dolls, souvenir chop sticks, kimonos, mobile phone covers, roasted nuts, Japanese sweets, t-shirts, key chains, Hello Kitty dolls and other souvenirs. Almost 100 small shops is lining the street, their selection of wares not too different.

Shops started appearing here back in the 18th century and have, with a few exceptions, been in business since. It runs from the Thunder Gate in the south, marking the entrance to the temple area, to the Treasure House Gate in the north. When I was visiting it was packed. 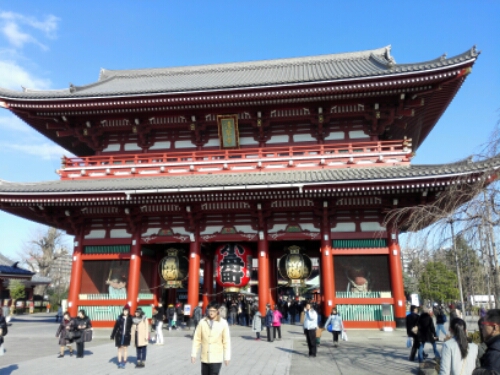 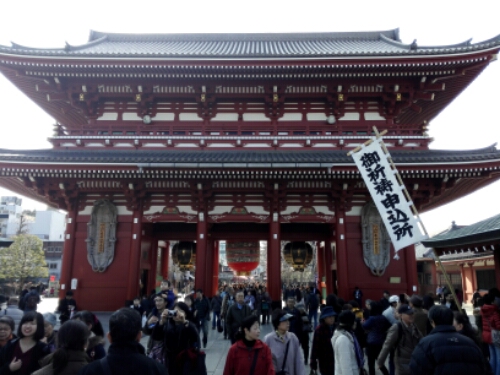 The Treausure House Gate with Nakamise-dori in the background

I made my way slowly through the crowd, there were people everywhere, stopping everywhere. I had to zig-zag my way through the crowd. Asakusa is a very popular tourist destination, both for Japanese people and foreigners. Especially the first week of the new year, when everybody in Japan visit shrines. 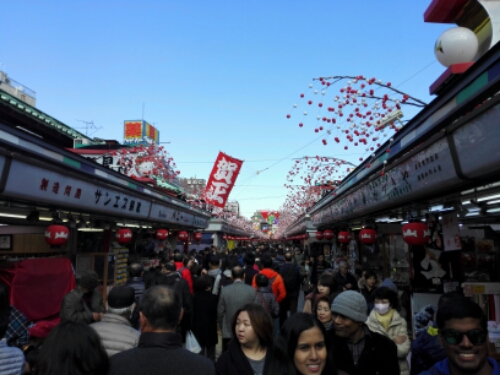 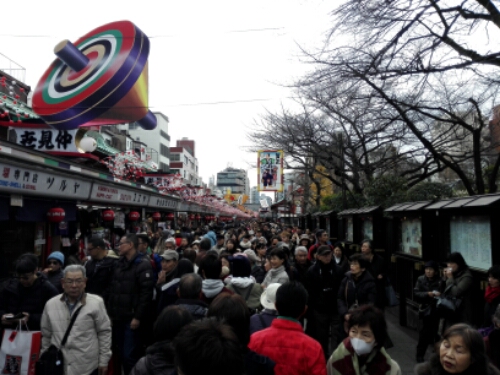 As I got closer to the train station I could see  across the river, only a short distance away. Back in 2012 when I visited Asakusa, I took a rickshaw from Asakusa to Tokyo Skytree. A great trip, the rickshaw driver spoke excellent English and gave us an interesting tour along the way. 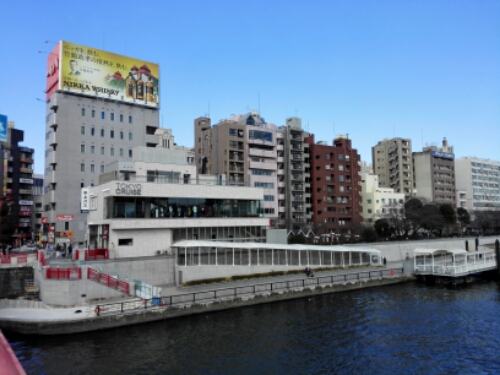 I got to the river, the boat would leave in a few minutes. It had been a nice visit to Asakusa, now I was ready to see Tokyo from the river.

Asakusa is easily reached with the metro. Asakusa station is serviced by the Ginza Line and the Toei Asakusa line. It is also the first station on the Tobu Skytree Line. From the station simply walk west and you will soon see Senso-ji temple. 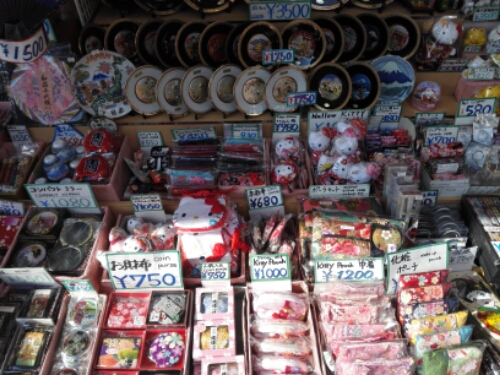