I visited Oedo Onsen in January, 2016

Going to an Onsen (hot spring) is certainly one of the Japanese experiences you must try. Relaxing in the very hot water can be really nice, but for me it has mostly been a quick experience. Sitting around in hot water for an hour or so isn’t really my thing. I get bored, I leave. It can be nice for ten, fifteen minutes, but that’s it. Oedo Onsen was quite a different experience. 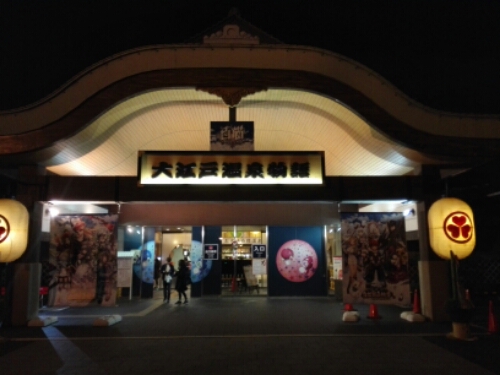 A friend told me, when learning I was planning to go to Odaiba, that I had to visit Oedo Onsen. It is totally bonkers were his exact words. I didn’t really know what to expect.

It had been a busy day so far. I had started in Asakusa, visited the temple and Hanayashiki amusement park, taken a boat from Asakusa to Odaiba, and then walked around in Odaiba, looking at the different landmarks. I was hungry, a bit tired, my feet were a bit sore. A hot bath would be nice now, in fact. I had also heard there were restaurants on the premises. 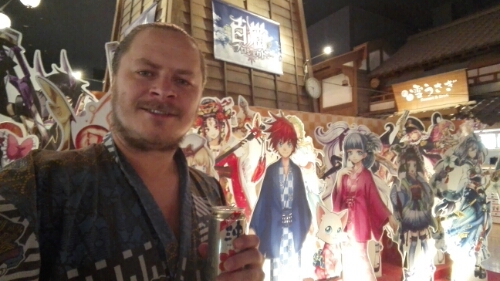 As I got to the changing rooms at the onsen I changed into my yukata (a casual, summer kimono), entered the onsen. I was expecting showers, a thermal pool, naked men sitting in the water. I found Oedo Onsen to be something quite different. 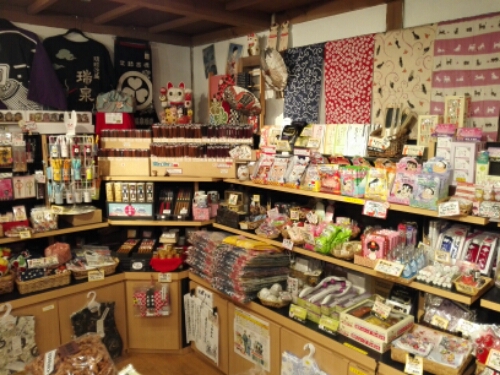 From the souvenir shop

Oedo Onsen is built up like a modern version of an old Edo village (Japanese village from the 18th century). Lots of wooden houses along the streets, small restaurants selling ramen or sushi, a few bars, souvenir shops, plenty of games. Meant to resemble an old Japanese village, it still looks a bit too modern and touristy. Part of the reason might me that everything is indoors. And all the electric lightning certainly does not help. 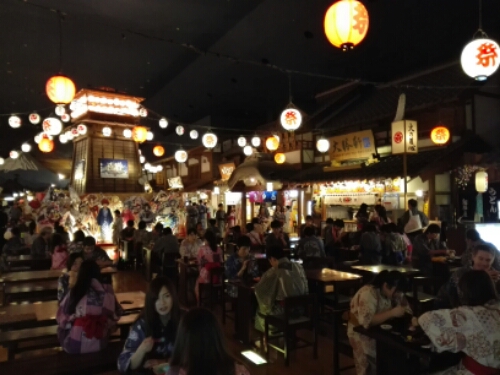 One of the food courts

Large tatami rooms were set aside for relaxment, different games where there for the kids to play. There was even a capsule hotel on the premises, in case you wanted to spend the night.

Oedo Onsen is more of a theme park than an onsen. There were far more people in the arcade and shopping area than it was in the bathing area. It is open from 11am to 9am, making it possible to spend a whole night in the onsen and arcade. Take a bath, have some food, relax a bit, take another bath. Play some games. Have a beer. 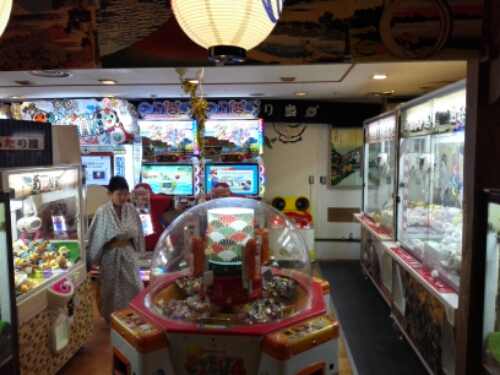 Arcade games for the kids

I took a look around first, found the baths, decided to get something to eat before getting in the water. There were several restaurants to choose from, all serving different Japanese food. There was sushi, yakitori, ramen, udon. All kinds of currys, and a huge selection of crepes for dessert.

Paying for anything inside the onsen was done by your key wristband. When entering you were given a wristband with the key to your locker, on the wristband there was a bar code. Whenever buying something you swiped your bar code, then payed for it all when leaving. No need to bring your wallet from your locker. 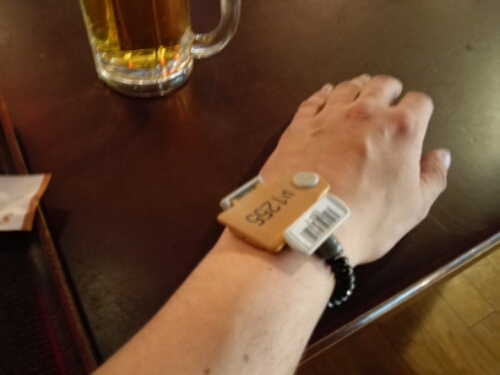 The wristband which paid for everything

I decided to go for ramen, pork noodle soup, I am a big fan. I ordered a bowl of ramen, an Asahi, swiped my wristband and sat down to wait for my food. It arrived after only a few minutes, as usual it was delicious. You can never go wrong with ramen in Japan. 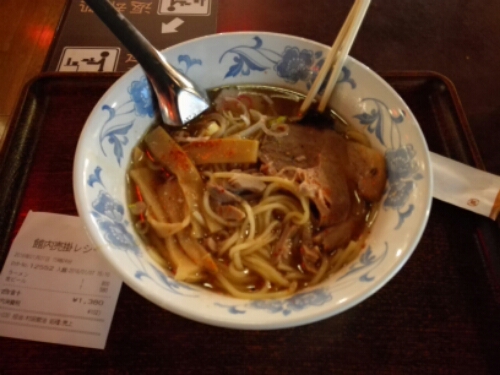 I had a long, relaxing bath in the onsen after my meal, it felt great to just lie in the water, let my mind wander, relax those sore muscles. There were both indoor and outdoor pools, the water in all was very warm and eventually comfortable. 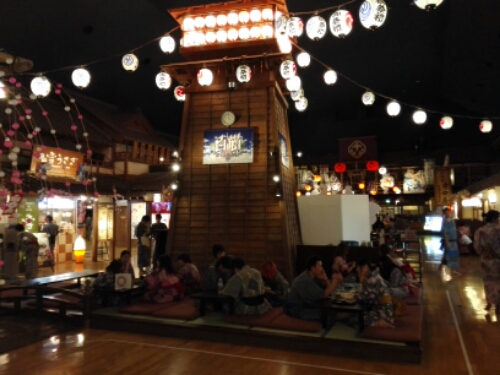 Inside the Edo village

At last I had to get out of the water, I had dinner plans, needed to get back to Shimokitazawa. I stayed for one more beer in the shopping arcade, walking around in nothing but the yukata was very comfortable. The Japanese girls looked so cute in theirs. 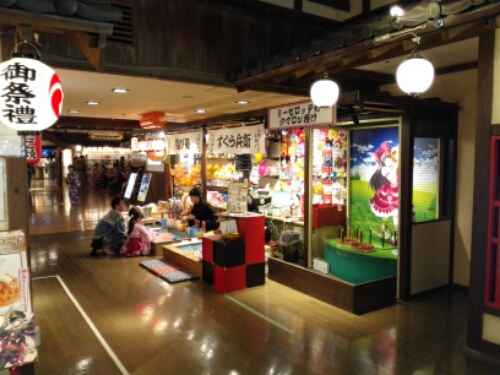 Some kind of fishing going on

Eventually I finished my beer, bought a few souvenirs and left the onsen. I wish I could stay longer, but I had other plans. I changed into my own clothes in the changing room, threw the yukata in the laundry, paid for everything when I left. The train back to Tokyo was only a few hundred meters from the onsen. 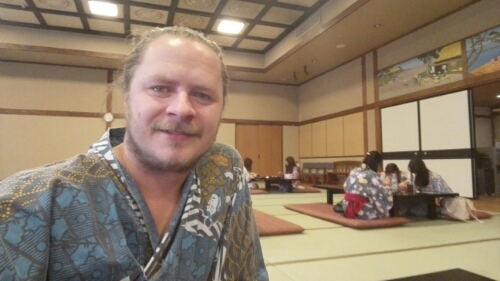 Inside the tatami room

Oedo Onsen is certainly worth a visit when in Tokyo. Yes, it is a bit touristy and nothing like a real onsen, but it is a very different Japanese experience. Walking around in your yukata, eating Japanese food, drinking Japanese beer. I loved the visit and will certainly return next time in Tokyo. Knowing how much more there is to the place, next time I will certainly plan to stay longer.

Oedo Onsen Monogatari is located south in Odaiba, just across the road from the Telecom Center Station on the Yurikamome line.

Opening hours are from 11am to 9am, with no entry after 7am.

The onsen follows a strict no-tattoo policy. If you have a tattoo you will not be allowed inside the premises.