I read Forbidden Colours by Yukio Mishima in March 2016

Forbidden Colours is a book by Japanese author Yukio Mishima published in 1951. Mishima is considered one of the most important authors of Japanese 20th century literature, and although he was never awarded a Nobel Prize in Literature he was considered several times. His books blended the modern and traditional, focusing on death, sexuality and Japanese nationalism.

Yukio Mishima is probably most known for his ritual suicide, or Seppuku, in 1970. Along with four friends he attempted a coup d’état, hoping to restore power to the emperor. When that failed he immediately performed Seppuku. He left behind a legacy 34 novels, fifty plays and sixty books of short storied and essays.

In Forbidden Colours we meet Shunsuke, a famous and respected author in postwar Japan. After three failed marriages, Shunsuke is filled with hatred against the opposite sex, as opposed to the pure women in his books. 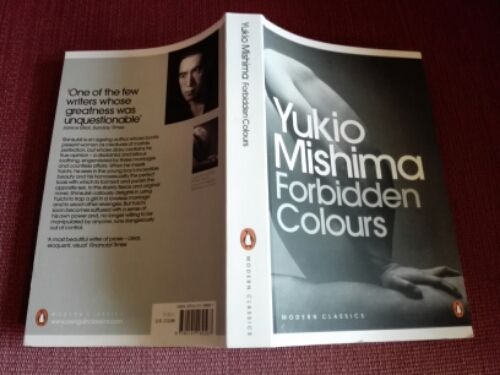 While staying at a hot spring resort, Shunsuke meets Yuichi, a stunningly beautiful youth about to get married with a much wealthier wife. When Yuichi confesses to Shunsuke that he feels no sexual desire towards his wife, or towards women in general, Shunsuke realises he can use the gorgeous Yuichi as a weapon against women in general.

As Yuichi enters into a hedonistic world of short-lived affairs, both with men and women, and his dutiful wife stays at home, eventually raising a child as well, Shunsuke’s plan seems to be working. But as time goes by, Shunsuke’s feeling begin to change, putting the whole plan in danger.

Forbidden Colours is a hard book to read, not only can it be tricky to follow the plot at times, but the characters themselves can be unsympathetic, women are easy to push around, gay man shallow and only after sex. The book depicts a world I can’t say I recognise, feel at home in. At times I simply wanted to put the book down, it was too much for me.

At the same time, the book is beautifully written and carefully plotted. Certain passages were a joy to read, I often found myself re-reading certain parts of the book just to experience the language again.

The book brings up themes like death, beauty, age and homosexuality, themes not necessarily easy to discuss at that time period in Japan.

Forbidden Colours is not for everyone. It is a hard book to read, depicting a world it is hard to sympathise with. I would not start reading Mishima by reading this book, but for fans of Mishima I recommend the book. It gives an interesting view into post-war Japan, and is considered at least somewhat autobiographical.

For more Japanese books, check out my Books from Japan Page.

See all my reviewed books on my Book Reviews Page.