The Log from the Sea of Cortez by John Steinbeck

The Log from the Sea of Cortez tells of John Steinbeck and Ed Ricketts’ trip to the Sea of Cortez in Mexico, a scientific trip with the goal of collecting samples of specimen of marine creatures in the area. Onboard the Western Flyer, a sardine boat rented for the occation, they embark on a journey over 6000 kilometers long.

The Log from the Sea of Cortez is Steinbeck’s notes on the trip, their activities, his thoughts. Day by day is narrated, the narrative often interrupted by the author’s thoughts on various issues. 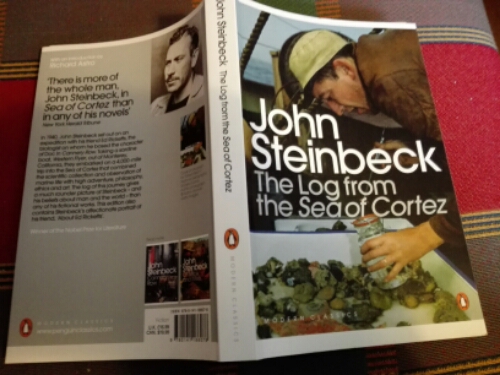 The Log from the Sea of Cortez by John Steinbeck

Ed Ricketts, Steinbeck’s friend and companion, a biologist who the character Doc in Steinbeck’s book Cannery Row is based on, also plays a large role in this book, with an appendix titled About Ed Ricketts, an emotional portrayal about a dear friend.

The book itself is well written, entertaining and most of the time hard to put down. Documenting an expedition collecting marine specimen in Mexico does not sound like the most thrilling story, and at times it can get a bit boring, the book does have some weaker parts, but most of the time the author captivated me, either by a great description of their journey or on one of the many thought tangents the author drifts off on. Anything can be discussed and pondered while sailing through the Sea of Cortez.

In this sense, the Log from the Sea of Cortez is not only a book about their travels in Mexico, it is also a journey into Steinbeck’s mind, where we find out his thoughts on various subjects, personal thoughts that not always come forward that clearly in his fictional books.

Steinbeck is one of my favorite authors, and this book, being a non-fiction book, did not let me down. The book is well written and manages to hold our attention throughout. Several times had I trouble putting the book down, reading far longer than I first planned.