I read The Cellist of Sarajevo in April 2016

The Cellist of Sarajevo is Galloway’s, a teacher of creative writing at the University of British Colombia, third novel, and deals with the siege of Sarajevo during the Balkan Civil War. Based on true events from the war, the book is still a work of fiction and makes no claim that whatever is written is a description of actual events. 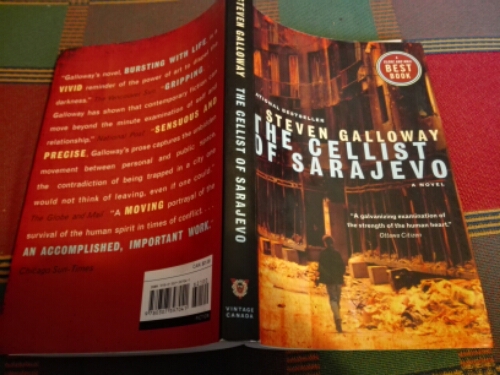 In the book we meet the Cellist, formerly the principal cellist of the Sarajevo Symphonic Orchestra, now limited to sitting in his apartment window and playing his instrunent.

When a mortar attack kills 22 people waiting in line for food just outside his apartment, the cellist wows to every day for 22 days go down to the crater left by the mortar, sit down and play Albinoni’s Adagio, one of his favorite pieces.

The rest of the book, we don’t meet the Cellist no more, he is present in the story, but the book follows the people around him, the people affected by his music.

The Cellist of Sarajevo is a very well written book, easy to read and very captivating. Without having lived in a war zone myself, I felt the book did a good job of portraying everyday life for the people of Sarajevo, living under a siege and experiencing daily bombardment. The characters we meet in the book are well portrayed, the plot flows naturally and the writing is very good.

The book brings up the question of music and if music can help create peace. Can beautiful music lead to a better world, or is the cellist just a crazy man putting himself in danger while pkaying. The book doed not give an answer to this question, it only bringsvit up for the reader to ponder.

The Cellist of Sarajevo is a great work of literary fiction. Entertaining, easy to read and a book that makes you stop and think. The book is recommended both for avis readers and people interested in the Balkan War and the Siege of Sarajevo. A great piece of historical fiction.

For more information about the city of Sarajevo, see my Sarajevo City Guide.

For more information about this region, see my Balkans Travel Guide.