Just making it to The Euros was seen as a feat, when the Icelandic football team came second in their prelininary group and advanced to the play-offs to face England, the country went crazy. This small island nation, a population of just over 330.000, the smallest country to ever play a European Championship, was suddenly to play the great football nation of England. Icelandair doubled their prices to France instantly.

Just before Iceland was to play England I said to my boss, partly as a joke, that if Iceland won I would go to Reykjavik to watch the next game, and needed a holiday. My boss said yes. As the game progressed, and it seemed Iceland really had a chance, I started thinking how fun it would be to actually go there for real, not just joke about it. When the final whistle blew, and Iceland had in fact beaten England I was already searching for tickets online.

Already hours before the game people had started arriving at Arnarholl, the grassy hill in Reykjavik where the big screen was set up for the games. Originally, the screen had been in a smaller park a few hundred meters away, but there had simply turned up too many people, it had to be moved to a bigger place. 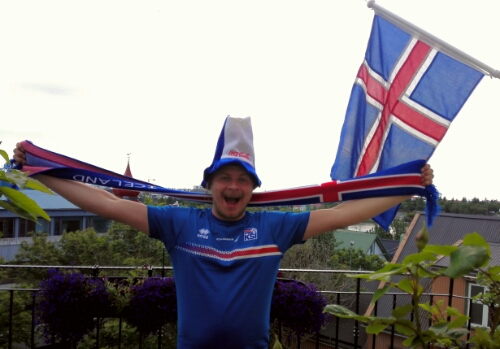 Ready for the game

The whole city of Reykjavik was covered in blue, white and red. Stores and bars were flying the flag, everyone walking around in the Icelandic colors. The mood was high, people were hoping for yet another miracle. I bought a shirt, a hat and a scarf myself to blend in.

I could not see much of the game at Arnarhóll, there were simply too many people, always someone in front of me, blocking the view. Parents were letting their children sit on their shoulders to see better, others wore big hats like me. Every now and then I would spot the screen, most of the time I only had the Icelandic commentary to go by, and that left me no wiser. 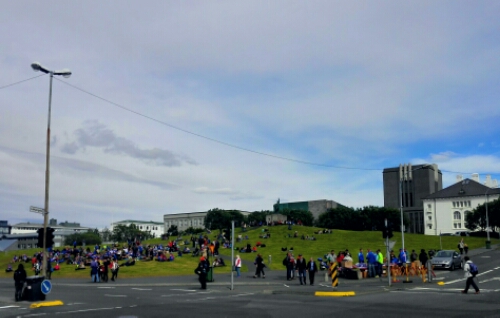 Four hours before the game. The first people were showing up

It did not really matter, I was having a great time. Everyone was happy, cheering for Iceland, singing. And every now and then the now famous Viking Clap. All 15.000 of us clapping and screaming ‘Hou’ in unison. Slowly at first, many seconds between each clap, then the pace starts accelerating. It ends in a big loud cheer of clapping, shouting, singing, dancing and jumping. The Viking Clap is quite impressive when heard that close, the experience left me with goose bumps.

It did not take long for France to score, a goal quickly followed by another one. Twenty minutes into the game Iceland were down 2-0, people were in shock. Their cheerful mood slowly fading away. But the score could not be said to be unexpected, Iceland had already outperformed themselves by coming this far. And slowly, steadily, the Icelandic people seemed to remember that, and realise this could be a once in a lifetime moment. Who knows if Iceland will make it this far ever again. The mood lifted again, more cheering. More Viking Clap. 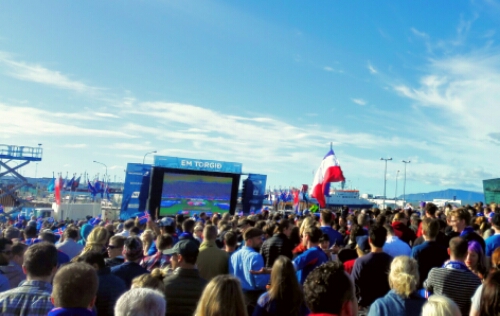 There were even sone French people in Reykjavik

As I left Arnarholl, following the crowds toward the bar street, I was stopped twice by TV reporters. First by Chinese, then by French Television. I must have looked Icelandic with all my Icelandic gear. I happily played along, answering questions on how it felt now, for me, the Icelandic, and how proud we were of our team. 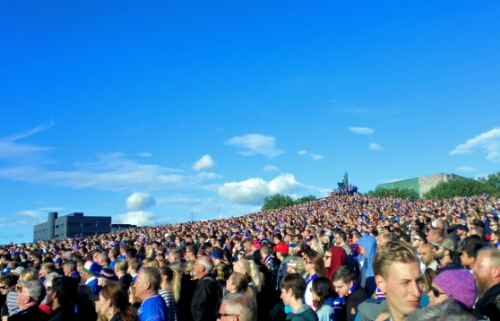 A sea of people

The party continued in Reykjavik’s many bars. At the Dubliner, where I ended up, there was drumming, singing and clapping outside all night long. I joined in at first, but as I got tired I found a table to sit at inside. They were showing the game on replay, giving me a chance to see it for the first time.

I was really impressed by the mood of the Icelandic people. They had just lost, but celebrated like they had won. Everyone was smiling, high-fiveing, and cheers and singing broke out all the time. It was the biggest party in Iceland, I was so happy to be a part of it. This is a country in which the general level of happiness rose during the devastating financial crisis that started in 2008. Now they were throwing a huge party to celebrate their exit from the Euros.

As the bars closed at 1 am I slowly headed home. Fans were still gathering in the streets. Singing, dancing, laughing. At two I was in bed, 9 hours until my flight would take off. A great weekend was over, I fell asleep with a smile on my face, so happy I had taken the trip to Reykjavik.