I visited Prie Katedros in Vilnius, Lithuania in May 2016

I started with their blonde ale, called Prie Katedros Light. It was hot, the sun was shining, a nice, cold blonde ale seemed just right at the moment. I took a large sip. The beer was good, nothing fancy, but in the sun and heat it was perfect. A little sweet but easy to drink. I settled back in my chair, relaxed. Just watching the people around me. 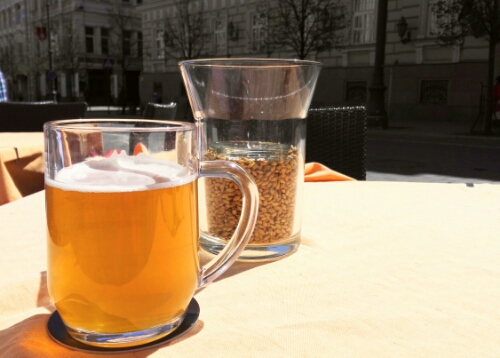 I found Prie Katedros Brewery Restaurant by accident. I had just arrived in Vilnius, did not know the city at all yet. It was my first time here. I had walked from my airbnb apartment, about a 20 minute walk from here, had a stop at the Frank Zappa statue in the city, the world’s first statue of Zappa.

As I made it to what seemed to be a main street, several restaurants were lining the sidewalk. When I saw that one of them was a brewery restaurant I knew where to go. I love trying out the local brew when travelling. I sat down on one of their tables outside. 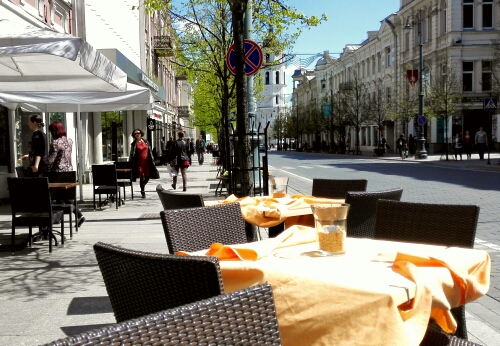 The view down Gedimino Avenue

My next beer came a few minutes before the meal I had ordered. A spiced honey beer, Medaus, and Lithuanian dumplings with potato and ham. The beer was good, hints of honey, a smooth finish, very easy to drink. 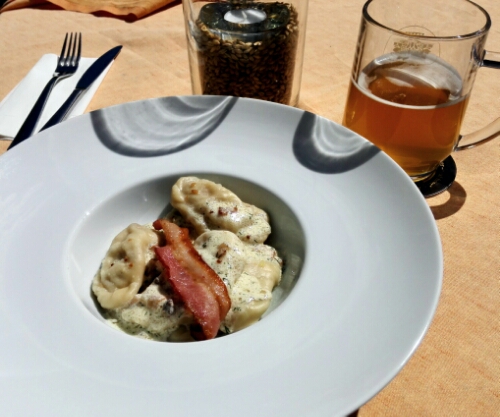 My potato and ham dumplings

The dumplings had, in my opinion, too much potatoes and not enough ham, but it was served with a single rasher of bacon on top, and that bacon must have been the best bacon I have ever tried. Perfectly salted, perfectly grilled. I contemplated ordering another plate of dumplings just to have more bacon.

After finishing my meal I ordered one last beer. It was warm, sunny, very nice to sit outside, relax, engage in some people-watching. My last beer was the Tamsusis, a dunkelweizen. A good beer, but in the sun I prefer a lighter beer, this one was a bit too dark for the heat. 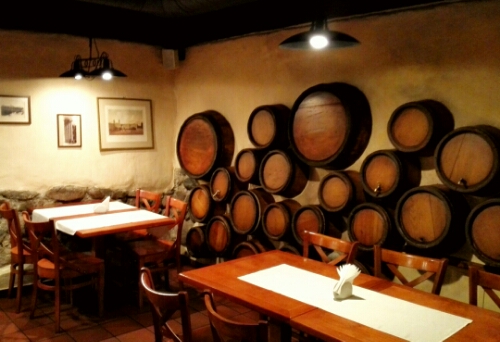 As I finished the Tamsusis I paid my bill and left. This being Vilnius, the bill was a lot cheaper than I am used to back in Norway. Prie Katedros had been a nice find in Vilnius. Good, local beer, and great seats outside. I started walking towards the KGB museum which I had been recommended. A look at the map told me it was just up the street. 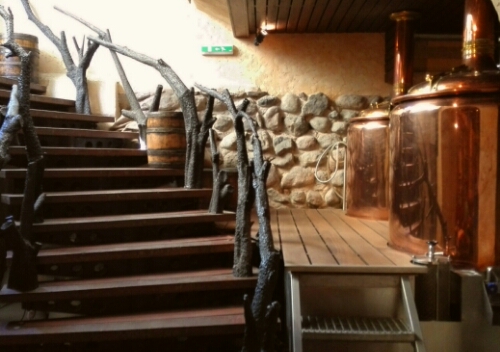 The restaurant is located downstairs

Prie Katedros is located on Gedimino Prospektas (Avenue) in Vilnius. For more information check out their website.