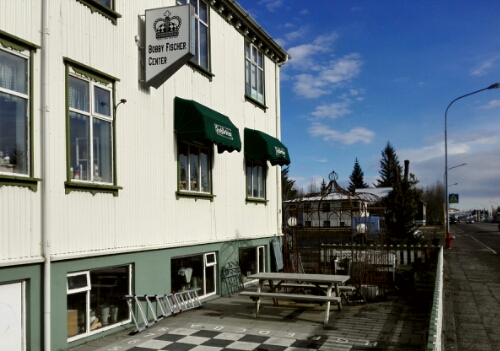 The table used in the World Championship match was the centerpiece of the room. A massive wooden table, plenty of room for a chess board, chess clock and ample writing space for the players to write down their game, with place to spare. I walked up to have a look at it. This was the table being used in the game. Fischer and Spassky had been sitting at this table for hours and hours, day after day. I felt I was in the presence of greatness. The guide came up behind me.

‘This is a replica of the table, all we have for now. We are working on getting the actual table here. For the moment it is in storage in Reykjavik.’ She said in her thick Icelandic accent. 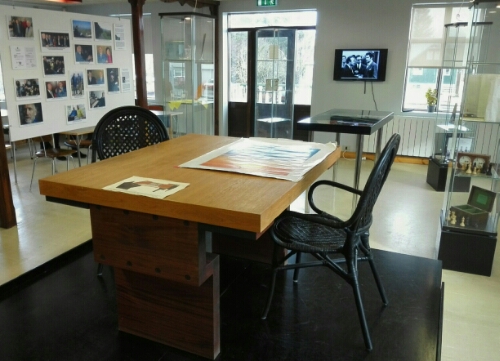 The replica of the table

I felt a bit disappointed. This wasn’t the table anyway, just a normal table really. I turned to the guide, waiting for the next bit of the tour.

The Bobby Fischer Center in Selfoss, Iceland, was opened in 2013, five years after Bobby Fischers death in Reykjavik, and subsequent burial in Selfoss. Run by volunteers and the local chess club it has limited opening hours, but a visit can be arranged by calling ahead or through the cashier at the flower store on the first floor. I only learned of this on the bus ride to Selfoss, luckily two people from Spain had already arranged for a visit that day. I could come at the same time they were there, I only had to wait for two hours.

The museum lies over a florist in what I thought to be the main street in Selfoss, in rooms also used by the local chess club. Entrance is ISK 1000, or $8 (Children 14 years and younger for free), a small fee to help the volunteers run the museum. It is a small but interesting museum, telling the story of the World Championship in Reykjavik back in 1972, as well as Bobby Fischer’s story when he came to live in Iceland in his last years.

After the troublesome lead-up to the tournament, one could not expect the World Championship Match to be held without any trouble. Bobby Fischer could be a difficult person to negotiate with, always coming up with new complaints and always looking to make some extra money. The first game went reasonably fine, no large tantrums or complaints from Bobby, although he did mention the disturbance of the television cameraes during the game. A disturbance that in Fischer’s mind cost him the game as he went over his loss that night. In an equal position Fischer had made a gambit that did not seem to work, his position slowly unravelling after that. By the next morning Fisher was certain, the television cameraes had cost him the game, and he refused to play any more until the cameraes were removed. 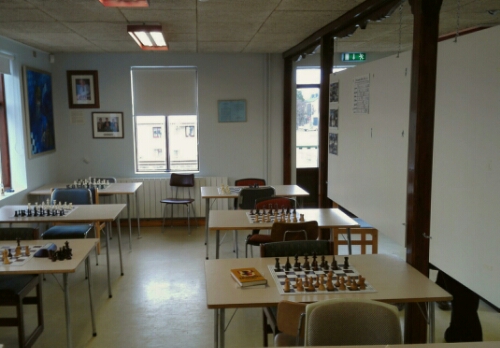 Bobby Fischer lost the second game by forfeit. He refused to show up to the game as long as the cameraes were there, the organisers refused to move them. An hour after the game had started, still no Fischer to be seen, the match referee declared the game forfeit, and Spassky the winner. Spassky now had two wins, and only needed eight more to win as the reigning champion would keep the title in case of a tie.

Fischer was furious and demanded the forfeit to be removed, otherwise there was no way he would continue the game. It took a lot of negotiating skills by the organisers, and another call from Secretary of State Henry Kissinger, before Bobby Fischer agreed to continue the match, with the score 2-0 to Spassky. Giving up would also mean missing the large prize fund for the match, even losing the match would net over $90.000 in price money. After finally agreeing to play, and actually showing up, Fischer played one of the best games of the tournament, holding a near winning position as the game adjourned for the night. Spassky would resign at once the next day after a long night analysing the position, Fischer had not even shown up yet, late as usual, when he won his first game of the match, and his first game ever, against Spassky.

After finally winning a game against Spassky, breaking that barrier, Bobby Fischer seemed unstoppable. After a draw in the fourth game Bobby scored another win in the fifth game. Scores were now tied at 2,5-2,5. Bobby Fisher had caught up with Spasskys two point lead. Fischer then followed up with a beautiful win in game 6, a game compared to a Mozart symphony by chess grandmaster Najdorf. The next six games saw Fischer win two times, Spassky win once. The rest of the games were drawn. Before the 13th game Ficher had a comfortable two point lead.

As I show up to the Bobby Fischer Center the two other visitors are not there yet, only the guide. One of those dutiful volunteers who help keep the museum open. Clearly passionate about the game of chess and the story of Bobby Fischer. As I get there she offers, almost demands, to give me a tour. I am more than happy to accept. 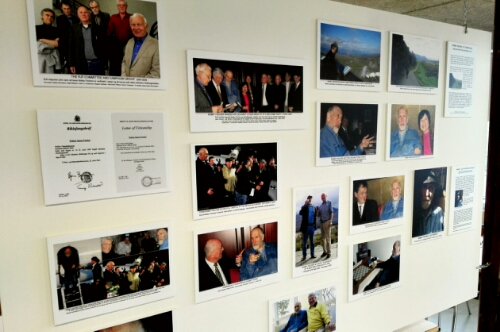 Some of the pictures on display at the Bobby Fischer Center

She goes through the photographs mounted on one of the walls, pictures taken during the World Championship match in 1972. Pictures from the game, pictures of Fischer and Spassky in Reykjavik, pictures of different chess or Icelandic dignitaries lining up for photos. Every picture comes with a story, every person in a picture is introduced. My guide tells the story of the match in an interesting way using the pictures. I am captivated, listening to her every word.

The 13th game of the championship was a real nailbiter, the momentum swinging bck and forth in a really sharp position. The game went on so long that it was adjourned for the evening, and would be resumed the next day. At this point Fischer had a slight advantage. The Russian analysis team concluded that the advantage would not be enough to win with, expecting the game to be drawn. Bobby Fischer did not have a large team of chess grandmasters helping him analyse games, he stayed up until 8 am trying to find a way to win the game, without success.

As the game continued at 2.30 pm, both players assumed the game to be drawn, but Fischer refused to give up. He kept on playing, trying to set up traps he was hoping Spassky would fall for. And in the 69th move that is exactly what happened. Spassky blundered, practically losing the game in one move. Bobby Fischer had assumed a commanding three point lead, and at this point in the match did not need to take any more chances. Drawing the rest of the games would win him the World Championship. The next seven games all ended in a draw. Fischer was now only one point away from the win. 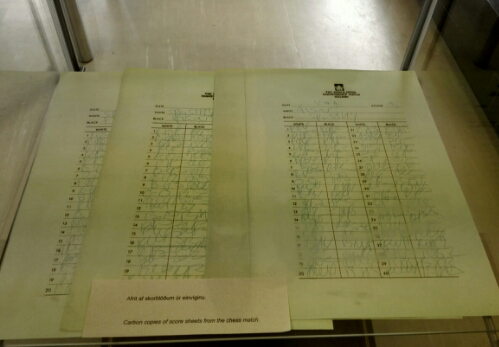 The score sheets from the game

The Russian team now accused Bobby Fischer of cheating. He was either influencing Spassky by some sort of chemical substance or by electronic means. An investigation was started by the Icelandic police. All they could find was a blob of wood filler in Spasskys chair, and two dead flies in the lightning fixtures. It was clear the Russians were terrified of losing the title, and were doing anything they could to discredit Fischer.

Game 21 of the match was a beautifully played game by Fischer. As the game was adjourned for the day Fischer had built up a commanding lead. It was doubtful whether the massive Russian analysis team would find a way to draw the game as they spent the night analysing it. When Fischer showed up to play the next day, Spassky was not there. He had already called in his resignation by telephone, thereby also giving up his title. For 34 years the Chess World Champion had been Russian. That had now changed. The new world champion was the American Bobby Ficher.

When the tour is over the other visitors have arrived. Spaniards, their English not so good. As the guide gives them the same tour she gave me I linger around, taking a closer look at the pictures and other items on display. Partly listening to the guide trying to be understood, in her thick Icelandic accent, by two people from Spain with a limited grasp of English. Quite entertaining at times. Before I leave I buy some books about Bobby Fischer that the Center has for sale, then head for the bus station for the ride back to Reykjavik. The Bobby Ficher Center is an interesting museum for chess fans, with plenty of memorabilia from the World Championship in Reykjavik, and volunteers with much knowledge of the story of Bobby Fischer. If you are a chess fan and in Iceland, I recommend planning a visit. Both to the Bobby Fischer Center and to his grave. 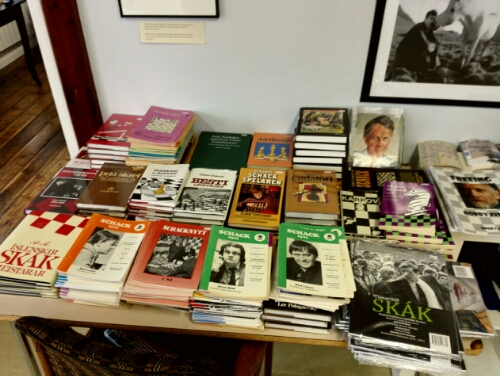 Books and magazines for sale at the Bobby Fischer Center

The next chapter of the story is Bokin in Reykjavik. A Second Hand Book Store.

One thought on “The Bobby Fischer Center in Selfoss, Iceland”