Endgame: The Spectacular Rise and Fall of Bobby Fischer by Frank Brady

I read  Endgame by Frank Brady in March 2016

Bobby Fischer still is of some fame today, thirty years ago he was known across the globe. And made Reykjavik and Iceland famous world wide too. A simple game of chess captivated audiences around the world, culminating in victory to the lonely American, taking the trophy from the mighty Soviet chess system. The cold war across the board, where the Russians always had been way stronger, was suddenly won by the US.

The story of Bobby Fischer is ultimately a tragic story. The chess wonder kid, who became the best in the world, only to fall into obscurity and re-emerge grumpy and anti-semitic, a bit mad. He celebrated when the twin towers fell, spat on a letter from the US treasury, in the end renouncing his American citizenship.

In the end he was adopted by Iceland, given a citizenship, and lived out his final years in that small land up in the North Atlantic. 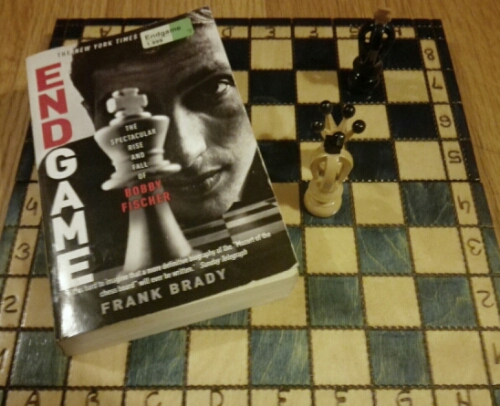 Bobby Fischer is a complicated man, and writing a book about him can’t be easy. He could be charming and witty, but also greedy and angry. He made outrageous demands, then taking offence to the demands of others. He was a complex person, maybe too smart for himself at times.

Endgame is a biography of Bobby Fischer by Frank Brady, once a friend of the chess player. It is not his personal account though, throughout the book the focus is on Bobby Fischer. His life, his achievements, his games of chess. The author has interviewed many people who knew the man, as well as gone through hundreds of documents, including some newly released KGB and FBI files.

Endgame is an informative and well written book about the life of Bobby Fischer, from his birth in Chicage to his death in Reykjavik. It covers all major episodes of Fischer’s life, the tournaments he entered, the great games he played, the people he befriended and unfriended. It does not get too chess specific, and can easily be read by people who do not know the game.

I read Endgame almost without stop, once I started the book I could not put it down. It is captivating, exciting, interesting. A great book about very special man. I can easily recommend this book.

Read more about this fascinating chess player on my Bobby Fischer Page.

Read more of my book reviews.