I read Kansai Cool by Christal Whelan in July 2016

Kansai, a region home to about 19% of the Japanese, is maybe the most important and most ‘Japanese’ region in the country. Including the cities of Osaka, Kyoto, Nara and Kobe, Kansai is in many way the historical and cultural home of Japan.

While busy Tokyo, in the Kanto region, is now the busiest and most visited city in Japan, the cities of Kansai can often be more laidback, relaxed, fun and open.

In a country filled with regional differences, Kansai still tries to stand out. The people of Kansai have their own Japanese dialect, and even stand on the other side of escalators than in Tokyo, something which can be confusing when travelling across the country.

Christal Whelan has lived and taught in Japan for several years. She is an anthropologist who has also worked in the US and Mongolia. 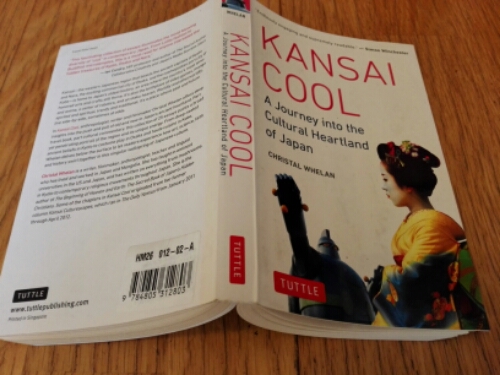 Kansai Cool is a book about Kansai, about the region and the different cities of the region. But by describing Kansai one ends up describing Japan. Kansai is in many ways Japan. At least to a certain degree.

The idea for Kansai Cool came from a column the author wrote for a newspaper back in 2011 and 2012. Selected articles from that column are included in the book, often expanded and revised.

The book is divided into six parts. Nature, Industry, A Sense of Place, the Arts, Youth Culture and Religion. In each part, several chapters introduces different subjects. We learn about why water is important for Kyoto, how the bicycle made it to Japan, robotics in Japan, the Japanese coffee culture, Butoh, manga, cosplay and buddhist temples.

Kansai cool is a well-written book, easy to read and also interesting. I learned a lot I did not already know about Japan, and started to see things I knew in a different light after reading the book. Whelan has found interesting aspects of Japanese culture to write about, and has done good research before writing. Where most books written by Westerners about Japan are either travel accounts, books of history or general introductions to Japan, this book delves deeper into the more fringe subjects of Japan, those you won’t hear about in other books.

I enjoyed Kansai Cool a lot, found it an interesting book and easy to read. My only complaint is that sometimes the author writes too much about things not Japanese. As an example, in the chapter about how the bicycle came to Japan, the book goes on and on about the history of the bicycle, most of which happened outside Japan, instead of keeping to writing about the bicycle in Japan. The same thing happened in quite a few other chapters as well. Apart from this I whole-heartedly recommend this book for people wanting to read more about Japan.

For more Japanese books, see my Books from Japan Page.

Read more of my book reviews.