I visited Funky Fresh Bar in Taipei in September, 2016

I never had time to visit all the places in Taipei they recommended me to go, but the ones I did go to did not disappoint. You only had to ask and they would start writing down places to go. Restaurants, hot springs, night clubs, cool sights. The owners at Funky Fresh were some of the nicest people I met in Taiwan, which was the main reason I kept coming back.

On my second night in Taipei I was visiting Shilin Night Market, one of the biggest and most famous night markets in Taipei. I found the market a bit crowded, a bit too focused on the tourists, a bit too commercialised in a way. The night market I had been to the night before had been a small affair, only a street blocked off at night, stalls set up, no more than fifty. Mostly local people visiting. Eating some food, playing some games. Shilin Night Market was much bigger, felt more permanent, you could hear English spoken everywhere, even som German and French. A lot of Japanese as well. I was a bit disappointed by Shilin Night Market, was in fact planning to leave. 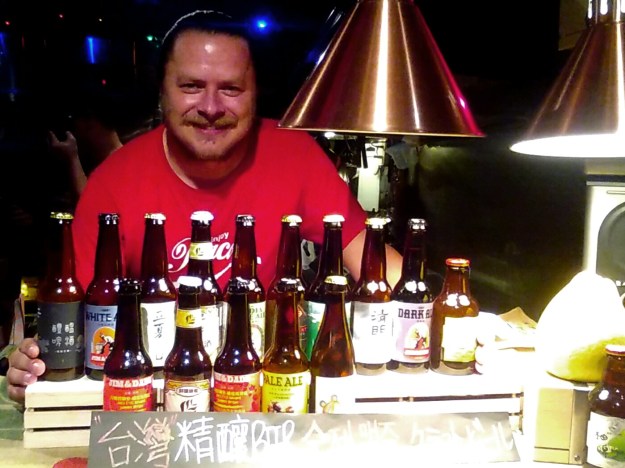 As I walked down a small alleyway, towards the entrance to the permanent part of the market, I noticed a small bar on my right. Good music blasting out from the speakers, signs advertising local craft beer. Only a few seats inside, a few tables set up just outside. I love to try the local craft beer when visiting other countries. Now I had a great time to try some Taiwan craft beer. I found a seat by the bar. Sat down. Ordered a beer.

Funky Fresh is a small bar, like a Japanese bar. Only seats along the counter inside. Just room for the bartenders and a place for preparing food behind the bar. BBQ skewers was the food of choice here. Tasty, juicy BBQ skewers. They were irresistible. A few tables were also set up outside, but the whole bar would be packed if more than ten people visited at the same time. A tight but intimate place. A place where it is easy to meet new people. Inside it was dark, music playing from the loudspeakers. Outside the lights from the night market lit the place up. 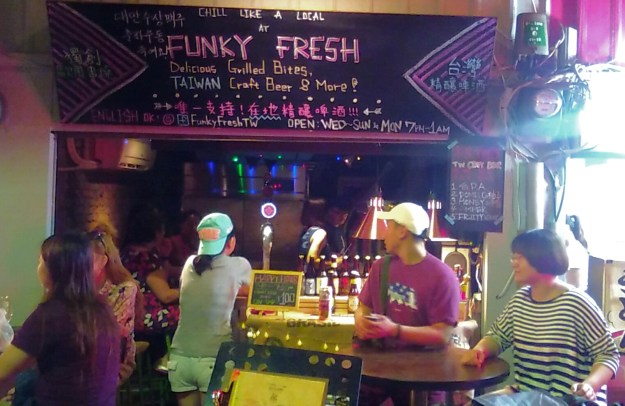 I came back to Funky Fresh a few more times during my stay. I always had such a good time there. I met people from all over the world, learned a lot about Taiwan from the owners, drank some very good Taiwanese craft beer, even made some new friends from Tokyo, who invited me to a birthday party back in Japan. The Taiwanese craft beer is good, and the food served at Funky Fresh went very well with the beer. I travel to meet people, to make new friends, to learn more about other countries. At Funky Fresh Bar I did all these things and more.

One thought on “Funky Fresh Bar in Taipei”