The view from the top was breath-taking. From an altitude of 384 meters, you can see quite some distance. The city of Taipei law beneath me, covering large areas of land. In most directions the urban sprawl went on for as long you could see, to one side forest-covered mountains lay not far away. It was a bit cloudy, the view was partially blocked from clouds and smog in the distance. I had been in Taipei less than 24 hours, did not know the city, but with the help of a map I figured out where I was staying in relation to the tower. I looked and looked. I never managed to spot my building. 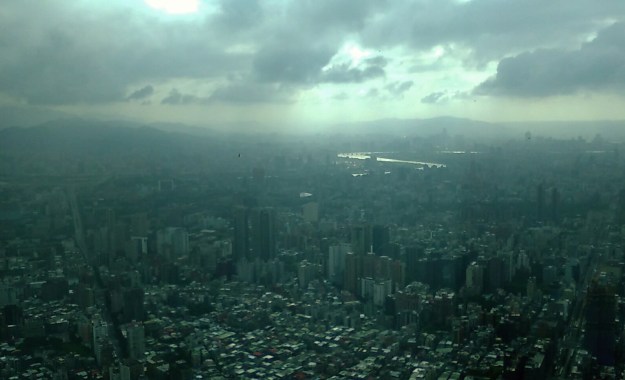 A view of Taipei

Construction on the skyscraper began in 1999 and was finished in 2004. Today the building is a symbol of Taipei and Taiwan, regularly featuring on New Year’s Eve countdowns and travel videos from Taiwan. Its design is based on the bamboo stick, thereby mixing the new, modern Taiwan, with the older and traditional. The shape of the building is also thought to help protect against typhoons and earthquakes. 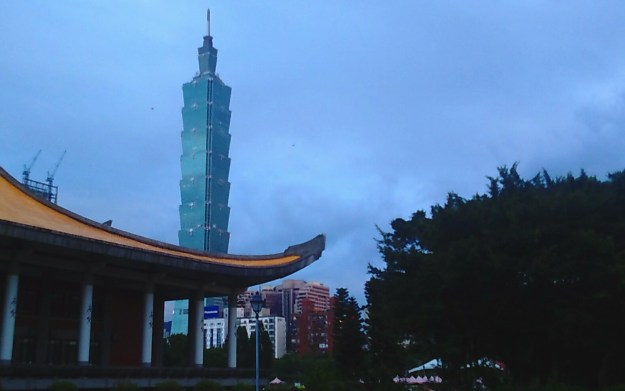 My ears kept popping as I took the elevator up. I kept yawning to unpop them. They immediately popped again. The elevators inside Taipei 101 were record-breaking back in 2004, breaking the old speed records for elevators with over 30%. The elevators reached a maximum speed of 60.6 kilometers per hours, travelling from the fifth floor to the 89th floor observatory in just 37 seconds. No wonder my ears popped.

We exited the elevator at the observation deck, 384 meters above the ground. Glass windows all around, you can really take in the view here. Quite a lot of room as well. I might have visited on a quiet day, but there had been lines for the elevator up, but here it felt like you had a lot of room. Spacious, quiet. And a great view. I walked the whole 360 degrees, taking in the view from all sides, got a lot of good pictures. I then headed for the middle of the building, for the giant steel pendulum.

Built just some hundred meters from a major fault line, in a country hit by typhoon after typhoon for five months of the year, Taipei 101 had to be well built, and able to withstand both earthquakes and strong winds. A solid foundation, as well as state-of-the-art construction ensured Taipei 101 is one of the most stable skyscrapers ever constructed. In addition, a 660-tonne steel pendulum is suspended from the 92nd floor, in full view from the observation deck. This pendulum serves as a damper against strong winds, counteracting the swaying of the building.

The penduum was not much to see really. A massive yellow ball suspended in the air. It wasn’t much wind today, no noticeable swaying, but enough to close the outside observation deck at 390 meters. In August 2015, when a powerful typhoon hit Taipei, the damper had swayed by 100 centimeters, a full meter. 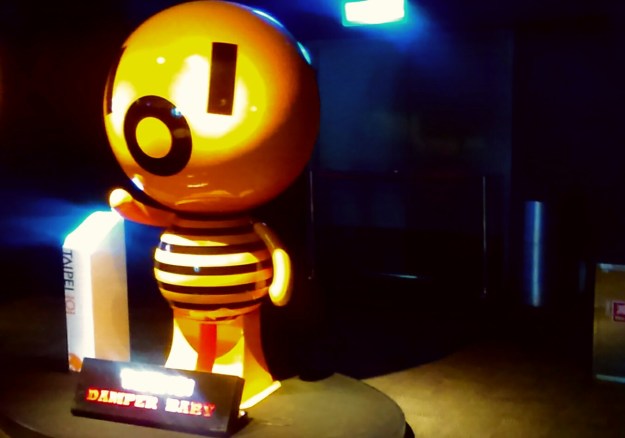 I walked around the pendulum, looked at the statues of the Damper Baby, a mascot especially made for the damper in Taipei 101. Today Damper Baby has his own comic book. Quite good marketing I would say.

After having spent enough time taking in the view I headed back down. I had to walk through a Jade Stone exhibit. Some of the Jade sculptures were quite impressive. Model buildings of Jade, pagodas, shrines, castles. Animals of Jade. All kinds of beautiful jade jewelry. I walked quickly through the exhibit. Took some looks, but did not stay long. Headed for the elevators. 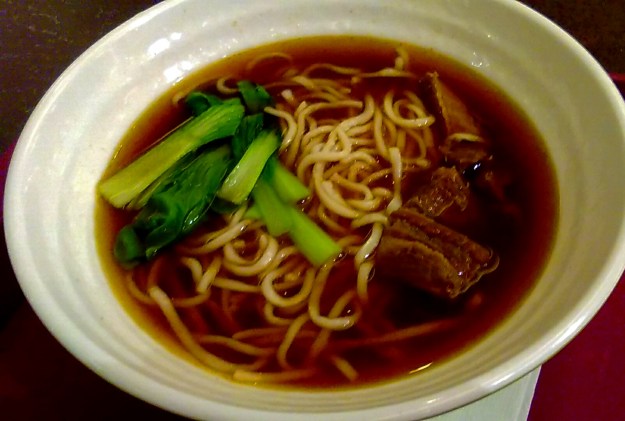 I took the elevator down to the basement level to get to the exit. Found myself in the middle of a food court. I was getting hungry, decided to have lunch here. I looked around a bit, there was too much that was tempting. Chicken, curry, beef noodle, duck, sushi. I ended up with a portion of Beef Noodles. Found a table to sit and enjoy my lunch. I could now cross Taipei 101 off my list. I had seen the view, I had seen all of Taipei. It was only my first day here, I was really looking forward to the rest of them.