Japan Through the Looking Glass by Alan MacFarlane

Japan Through the Looking Glass is a study of Japan. It’s culture, ideas, way of life, way of thinking. Alan MacFarlane, an anthropologist and historian, holding a professorate at King’s College in Cambridge, is the author of several anthropological and historical books and articles on England, Nepal, China and Japan. His interest in Japan began in 1990 when offered a visiting scholarship to Japan. Since then MacFarlane has visited Japan on multiple occations, and have developed friendships with several colleagues in Japan. The book, published in 2007, is a result of these trips and friendships.

The book is labeled as a travel book, I do not agree with this. This book is not a travel book, it is a look into the Japanese psyche, what it means to be Japanese. It is an anthropological book, a cultural book. There is very little travelling done on the pages, instead the book explores the Japanese people. How they live and how they think. What it is that make the Japanese Japanese. The book looks at subjects like wealth, power, ideas and beliefs, and disect the Japanese culture in order to understand it.

I really liked this book and it probably won’t be long until I read it again. It is informative, well written and looks at interesting facets of Japan, its people and their way of life. Even after five visits to Japan I find a lot of new information about Japan in the book, and it also helps me to clear up things I have been wondering about Japan. 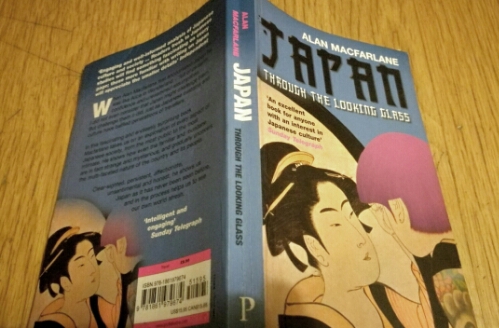 Japan Through the Looking Glass by Alan MacFarlane

This is a well written and informative book about Japan, recommended to both people new to Japan as well as those that know some about the country. It does a good job in explaining what makes the Japanese different to the rest of the world, and why it has become that way.  I enjoyed every page of this book, I have read it twice now, and will probably read it again in not such a long time.

See also my Books from Japan Page and my Book Reviews Page.