I visited Taiwan during Typhoon Megi in September 2016

Branches were falling off trees, down to the road below. Blocking traffic, being in the way of cars. One huge branch fell down just a meter or so in front of a car. The driver just managed to break, saw it as it came falling down. He sat still in his car seat for a long time after coming to a stop, taking deep breaths, before finally driving again. This is crazy. Driving in these conditions is crazy. And there were people out on their scooters as well! Shop signs were falling down from the walls, crashing into the street below. Any loose object could suddenly come flying through the air. And it seemed the wind was picking up. It had stopped raining, but the winds were getting stronger and stronger.

The first signs of the typhoon came the day before, on monday. My stay in Taiwan had been sunny, a little cloudy but no rain, mostly blue skies and high temperatures. On monday it started raining. Showers at first, the sun peeked through the clouds every now and then, but massive rain showers t regular intervals. For twenty minutes the sky would throw as much rain at us as it could, then the sun would appear. We would have sun for a while, then another shower. The humidity went up in the ninetees, the temperature was still over 30. You did not simply get wet from the rain, I was sweating heavily as well. 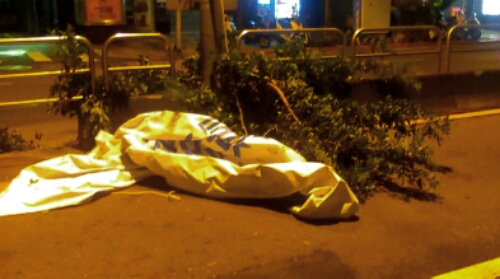 Branches lying on the road

The showers continued throughout the day, by night it was raining more or less continuously. I was glad I had brought an umbrella. Under its protection it was only sweat I had to worry about. Every now and then I would stand in the rain, hoping to get the worst smell off. When I came home that night I had a long, good shower before going to bed. I fell asleep listening to the ever-increasing rain outside.

Typhoon Megi was just one of many typhoons to hit Taiwan in 2016. Just two weeks before a massive typhoon had hit the country, leaving infrastructure already in bad shape. The country braced for the impact of Typhoon Megi. Almost 4 million households were left without power as Megi made landfall, 14.000 people were evacuated. As the Typhoon passed Taiwan, winds passing 200 km/h, four people were killed, a number later rising to eight, and 625 people were left injured. More than 400 flights had been cancelled, the trains stopped running at several location, there was the consant risk of mudslides, the cost to the Taiwanese economy was in the billions.

I woke up late the next day, had gone to bed quite late the night before. There was a typhoon coming anyway, no point getting up only to be locked in the apartment all day. Luckily 7/Eleven was just around the corner, I could always get food there if worst came to worst, did not even have to go out in the rain. The sidewalk was covered the whole way. All day long the typhoon slammed into Taipei. Heavy rain, powerful winds, the winds were hammering against the windows of my 11th floor airbnb apartment. In the afternoon the winds seemed to slow down a bit, it appeared to rain a little less as well. I decided to brave the weather, go outside. A fellow traveller I had met the night before texted me from a bar a few stops with the Metro from my apartment. I sent him a message, told him I would come. 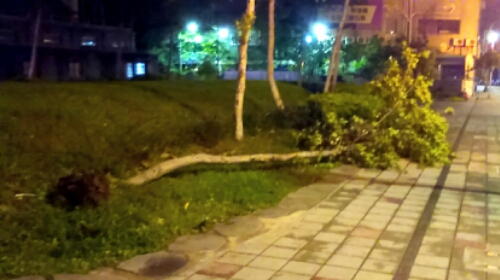 The Metro was almost completely empty that day. Usually there is alway people on the Taipei Metro. Maybe not as many as in Tokyo, but still hard to find an empty seat. I always ended up standing. Now there were almost no one here. One man got off the train I got on, I had the whole car to myself. After a few stations a woman got on. That was all the people I saw. It was eerie in a way. This empty metro. 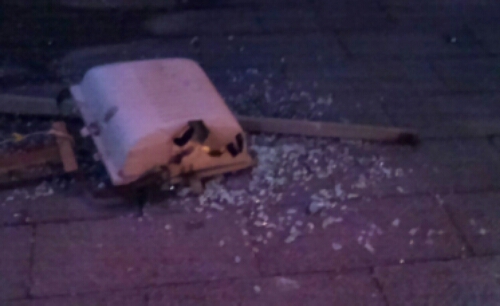 It stopped raining not long after I arrived at the bar. A sign that the typhoon soon was over? It did seem that way at first, then the winds started picking up. Heavier and heavier winds. We could hear the trees creaking, not able to handle the pressure. Branches started falling to the street below. Cars still out driving had to navigate huge branches on the road, as well as pay attention to the trees above. Another branch could fall down. The people on scooters seemed particularly vulnerable. Were they brave or just foolish? 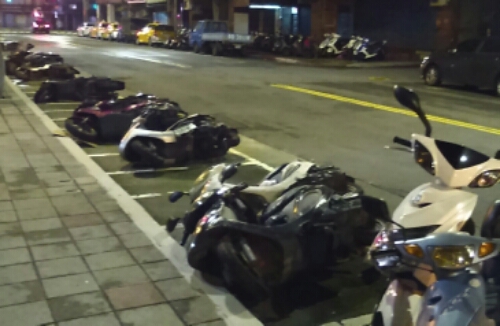 It was a lot later than I had planned to go home when the wind finally had slowed down enough that I dared to venture outside. Start heading home. The metro had stopped for the night, it was too far to walk. I hailed a taxi coming down the street. On the way home I kept looking out the window. Looking at the debris lying around. Branches that had fallen down from trees. Shop signs, street signs. Rubbish lying around. Row after row of scooters having fallen like dominoes. Parked side by side, as soon as the first one falls they all fall. And since I work for an insurance company I could not help to wonder what the costs would be, and what it would be like to work in the claims department at an insurer tomorrow.