It was the day after Typhoon Megi, yesterday all flights to and from Taoyuan Airport outside Taipei had been cancelled. Today the typhoon had passed, no more rain, the winds had calmed down. A perfect day for flying. I still anticipated some chaos at the airport. Lot oftravellers, long lines. People who could not fly yesterday looking for a new flight. Planes needed to be redirected, planes not where they should be, having to get to Taiwan before being able to depart from Taoyuan Airport. Things could be slower and more chaotic than usual. I left Taipei with plenty of time, I did not want to be be in a hurry at the airport.

The lines actually started on the highway, a few kilometers from the airport traffic slowed down, almost came to a full stop. This did not seem to trouble my taxi driver, he found a faster way taking back roads and parallel roads to get me to the airport. I still had plenty of time when I arrived. 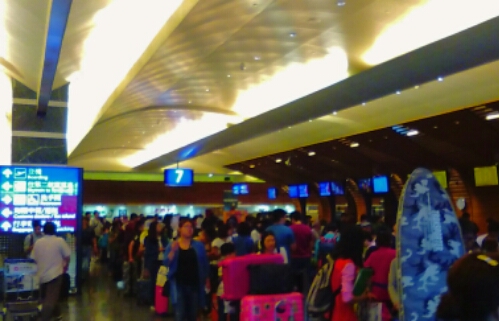 Inside the terminal it was packed. People everywhere, a long line of people waiting to check-in to Tiger Air. My flight was not open for check-in yet, I found a place to sit and wait. Most flights seemed to be delayed, every flight at least 30 minutes, some up to several hours. No information about my flight yet. On the board it simply said Wait. I kept my portable wifi, I had to return it before going through security, but did not want to do it before I had to. At least I had access to the internet.

An hour before the flight was to leave we got the bad news. The flight was cancelled. The plane was not in Taiwan yet, there was no other plane to use. We were all rebooked to a flight the next day, then told to wait. The airline would provide accomodation for us, soon there would be shuttle buses to take us there.

It was a long wait before the buses came, then a quick ride to a hotel not far from the airport. There did not seem to be much happening around the hotel. I could see a 7/Eleven and a massage parlor. Nothing else. We were already checked in, in the lobby of the hotel we got our room keys and information about dinner and pick-up the next morning. Our flight left at six in the morning, the buses would be here to pick us up at 4 am.

The hotel was very luxurious. I got a massive room for myself. Two big king size beds, a large bathroom, I only missed a bath tub to relax in, there was only a shower. Dinner was served in one of the many restaurants in the hotel. Buffet style with both asian and more western foods. I was very impressed by the buffet. Sushi chefs were standing there, ready to serve fresh and delicious sushi. There was a large section of BBQ meat, different asian salads, soups, a lot of seafood and a massive dessert section. I spent an hour and a half in the restaurant, taking small breaks between dishes, stuffing myself as much as I could on all the delicious food. And there is always room for some cake, of course. 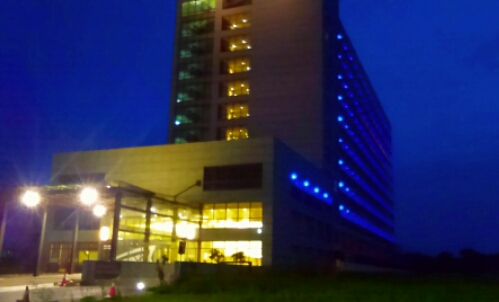 When I first learned of my cancelled flight, and realised I had to spend another day in Taiwan I did not mind. I had a great time in Taiwan so far, it was an interesting country and a week had not been long enough to really get to know the place. Another day seemed perfect then. But I had to wait for hours at the airport that day, first before learning of the cancellation, and then for the shuttle bus to take us to our hotel. I realised I would not have many hours more in Taiwan really, many had already gone by. I as also starting to worry that we would be put up in a hotel close to the airport, not really close to anything.

My suspicion was confirmed on the bus. We did not drive towards any city. We drove out into the wilderness, and stopped at a hotel that seemed to cater to people staying a night waiting for their plane or large conferences held close to the airport. I realised my extra day in Taiwan would almost entirely be wasted.

I took a quick walk after dinner before retiring to my room to watch old episodes of QI, my favorite TV-show, on YouTube. I had brought some beers and snacks from 7/Eleven. The next couple of hours I spent in bed, watching British comedy, drinking Taiwan Lager and eating Taiwanese potato chips. I fell asleep around midnight for a solid three hours of sleep before getting up for the bus ride back to the airport.

That day everything went fast and easy. Wehad plenty of time at Taoyuan Airport. Check in was quick, immigration even quicker. Security took a few minutes. My plane took off on time and the ride back to Tokyo went smoothly. I slept most of the way there. I landed in Tokyo a day late, and with less than three days before my flight back to Norway. My extra day in Taiwan had mostly been a waste of time, dinner was incredibly good, the rest of the time consisted of waiting or watching TV in my bedroom. Not the things I travel halfway across the world to do. All in all, my extra day in Taiwan had not given me an memorable experiences, except for the buffet of course.