My flight from Taiwan back to Tokyo was cancelled. The airline put me on a flight the next morning, and checked me into a hotel not far from Taoyuan Airport to spend the night. It was a really nice hotel, the dinner buffet was amazing, but after a while I was full. Room for no more to eat. I left the restaurant.

I went back to my hotel room, a huge room, two large double beds. Big screen TV. Most of the channels in Taiwanese. It is still early, only 8 pm. No reason to spend the rest of the night locked up in my hotel room. I put on my shoes, leave the room, head out of the hotel. Time to explore the place I have ended up in. 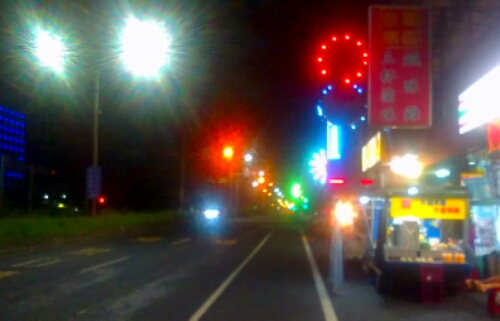 The main street outside my hotel in Taoyuan

There was really only one road outside to choose. In one direction it seemed to be nothing much, there were lights for maybe a hundred meters, then it went dark. The other direction looked a bit more livelier. I crossed the road, started walking down the street. I first came to two convenience stores laying nect to each other. A 7/Eleven and a Family-Mart. Then followed a few closed store fronts before I had to walk out into the road. The pavement was occupied by an old man welding. Things did not get any more exciting after that. I mostly walked past closed store fronts and open massage parlors. I wondered if that was all they were.

In front of me lay a bridge, and there was no footpath to take across it. I tried to see if there was any other way of crossing the water, did not want to cross on the busy highway. Could not see any other path in the dark. Not wanting to just turn back I took a left instead. Walked down a dark road, no idea where it was leading, but could see a residential area up on my left. When I finally came to a road perpendicular to mine I was more than happy to turn left.

I came to what I think was a temple. A large lit up building in gold and red. What looked to be a fountain in front of it. What must have been the shrine itself was hidden bhind closed doors for the evening. The temple yard being used as a place to park scooters at night. Maybe it wasn’t a temple at all. But what could it then be? I pondered this as I walked down the road. Away from the temple, towards a large number of residential buildings. 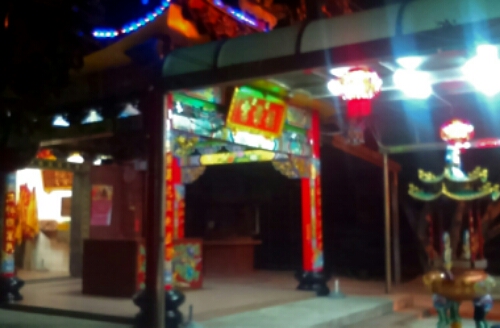 I think this is a temple

I walked down the road, along the residential buildings. Not much to see, mainly doors and small gardens. Balconies for the apartment above. Scooters parked in every empty space along the road. The few people that I came upon greeted me with a smile, some even said hello. I wondered how often a tourist from Norway would walk through here. Taoyuan is not the first place that comes to mind when isiting Taiwan. People here did not seem surprised at all, took it in good stride. At least Taiwan is safe. I could not go walking like this in places like this in several countries around the globe, not even in Europe. It was dark, hardly any street lights. I was walking through a poor people’s neighbourhood in a small town just by the airport. It looked a little bit like a ghetto. And I felt perfectly safe. 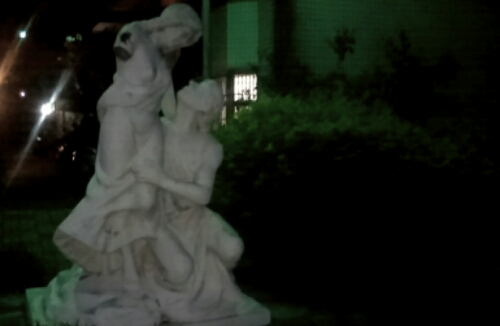 A statue I found on my walk

After half an hour I as back where I started, apparently I had seen it all. It was still early, not even 9 pm, and I was unsure of what to do. It felt a bit boring to just go back to my room, but seemed equally boring to walk these quiet streets. I ended up stopping at 7/Eleven, bought a few beers and all the strange Taiwanese snacks I could find. The rest of the night I spent in my hotel room drinking Taiwan lager, snacking and watching TV on my iPad. This place had nothing more to offer me. I did not find Taoyuan that interesting.

4 thoughts on “A Night in Taoyuan, Taiwan”