I had seen the building from the Observation Deck at Taipei 101. A large, traditional Taiwanese building. A shrine or a museum or memorial to something I guessed. It was not far from the tower, it was still early in the day. I had plenty of time to go and see what it was and decided to do so. I love to travel without plans, just do what I feel inspired to do in the moment. This time my inspiration took me to the Dr. Sun Yat-sen Memorial Hall

I had not heard about Dr. Sun Yat-sen when I first travelled to Taiwan. Chinese and Taiwanese History is not my speciality. I usually only know of their encounters with Japan. I knew there had been an imperial dynasty that was toppeled, then a civil war between the Nationalists and the Communists, a war the communists ultimately won. The Nationalists fled to Taiwan and established the Republic of China there. Both the People’s Republic of China and the Republic of China (Taiwan) claim to be the true Chinese government and claim sovereignty to all of China. That was about all I knew before coming to Taiwan. 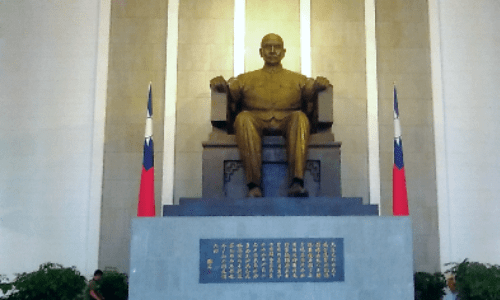 Dr. Sun Yat-sen is a person so unique to be revered both in Taiwan and in China. The Taiwanese see him as the Father of the Nation, while in China he is called the Forerunner of Democratic Revolution. Sun Yat-sen was one of the leaders in the revolution to overthrow the Qing Dynasty, and in December 1911, when the revolution had succeeded, he was appointed the first Provisional President of the Republic of China.

I got there just as the Changing of the Guards Ceremony was over. I felt a bit bummed I had missed it, but the following days in Taipei would give me more chances to see such a ceremony, both at the Chiang Kai-she Memorial and the National Revolutionary Martyr’s Shrine. A large group of people had gathered to watch the ceremony, as the soldiers marched away, all of them this time, the Honour Gards were over for the day, the crowd dispersed, the hall became almost empty. 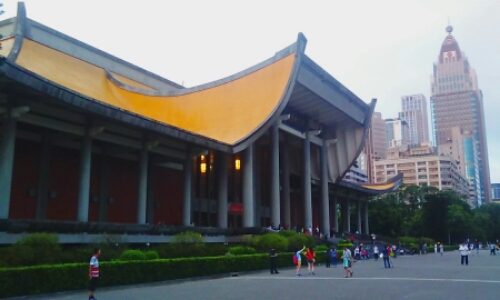 Born in 1866, Sun Yat-sen moved to Hawaii when thirteen years of age. It was at school in Honolulu he was first introduced to christianity, he was later baptised in Hong Kong. After four years in Hawaii he returned to China, but by then he was already involved in revolutionary activities which caused him to live most of the time in exile. Either in Hawaii, Japan, Europe, mainland United States or Canada. It was in Hawaii he formed the Revive China Society, an organisation that would later evolve into Kyomintang, the Chinese Nationalist Party

On both sides of the Memorial Hall were exhibit halls portraying the life of Dr. Sun Yat-sen. On one side various of his belongings; weapons, books, letters and soforth were displayed. The other side showed pictures of him, along with posters describing his life. At the end of it all was a small souvenir shop. I found the museum to beinformative and interesting, presenting the life and works of Dr. Sun Yat-sen. 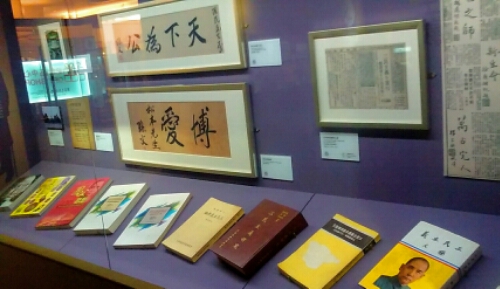 Inside the museum at Dr. Sun Yat-sen Memorial Hall

I spent some minutes walking through the museum, looking at the various displays, before heading to the souvenir shop to see if I could find a small souvenir to buy. Nothing big, don’t have room for that, but I always try to buy something small. I found a shot glass and a miniature of the Memorial Hall, bought them and headed for the exit. 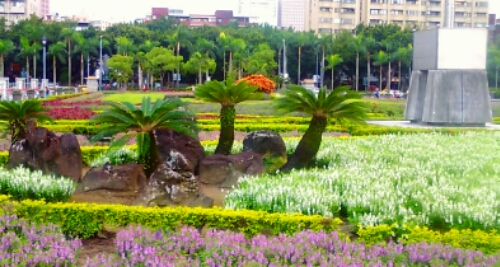 From the park outside

As Provisional President Yat-sen was still not the leader of a unified country. The Republic of China had a good hold of the south, but in the North local warlords still clung to power, and the communists were rattling their sabers as well. In an attempt to defeat the warlords of the North, Sun Yat-sen signed an agreement with the communists, the Sun-Yoffe Agreement. While this Northern Expedition brough some control of China back in Yat-sen’s hands, it was still a divided country up to his death in March 1925. Yat-sen had not completed his goal of unifying China, but had sown the seeds for a revolution, and is therefore highly revered in both China and Taiwan. 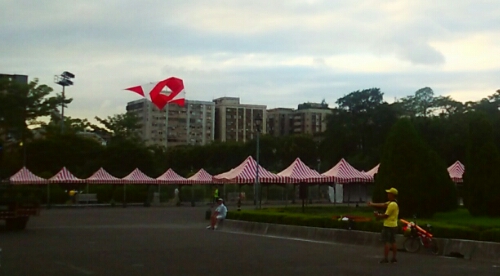 Out flying his kite

I left the Dr. Sun Yat-sen Memorial Hall as the sun started to set. It was still light outside, but slowly getting darker. Fewer people were in the park now compared to when I entered the hall. An old man was out flying his kite, som families out for a walk, kids tunning around, parents walking and chatting. Most people were heding for the exits, going home, their visit to the Memorial Hall over. Soon it was closing as well. I took  quick look at the map to find the nearest metro station, started wlking towards it. It was only a few minutes away.