I visited Naminoue Beach in Naha in September 2016

Okinawa, the southernmost archipelago in Japan, is known for its tropical weather, sandy beaches, luxurious resorts and clear water. Naha, the biggest city in Okinawa, only has the tropical weather among these. For example the beach in the city, Naminoue beach. It is small, the view is of the port, with its big cranes and industrial building. And now they have even built a bridge over the beach. A big, massive bridge for the motorway. A short cut for the cars ruining it for the beachgoers. The bridge looks horrendous as it towers over the swimmers. A big, massive, concrete slab hovering over us as we try to sunbathe. 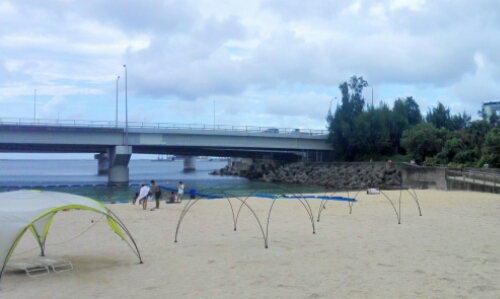 The bridge ruins the view

I was to spend three days in Okinawa, all the time in Naha, not nearly enough time to explore all of the islands. The reason I came here was that it was my fifth trip to Japan, and on my first four trips I had visited the four largest islands. Honshu, Kyushu, Shikoku and Hokkaido. Okinawa was next on the list. I had to come here. Located a lot further south than Tokyo, where I came from, a lot further south than the rest of Japan, Okinawa has a tropical climate, and in September it is hot. It is also typhoon season but I was lucky and avoided any tropical storms during my visit. 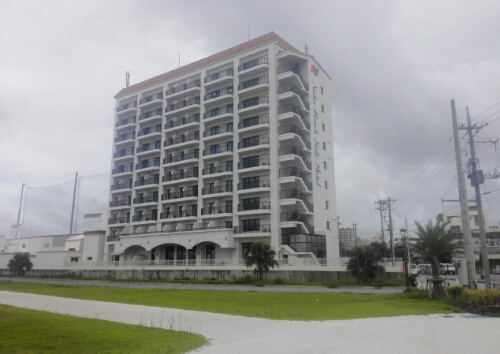 With my hotel only minutes from Naminoue Beach, a quick stop for a swim became a regular part of my day in Okinawa. I would wake up, get dressed, head for the beach. A quick dip in the water before breakfast was a great way to start the day, and got me ready for a full day of sightseeing. Returning to the hotel before dinner, another swim in the ocean, a quick shower, got me ready to eat and to explore the night life of Naha. There are showers and toilets located next to the beach, so it is easy to rinse of the salt water stuck to your body. Life guards make sure all swimmers are safe. 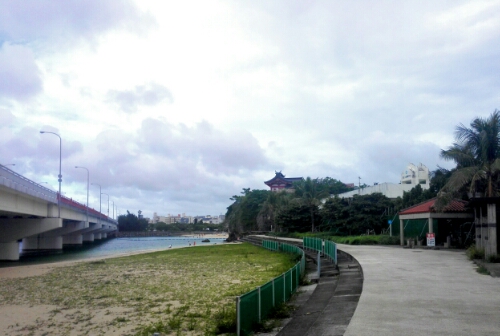 Heading for the beach

Naminoue Beach might not be the most beautiful beach in the world. It is not scenic, it is not something that will impress you on first sight. It is small, crowded, and ruined by the motorway passing meters overhead. But it is the only beach in Naha, it is all the biggest city in Okinawa has to offer. You get the chance to sunbathe, have a swim in the ocean, and the facilities are acceptable. What more could you ask for in a beach?