I visited Okinawa soba in Naha, Japan in September 2016

There are a few differences between mainland Japanese and Okinawan cuisine. A separate country for a long time, Okinawa had time to develop their own culinary traditions, creating dishes different from those in the rest of Japan. One example is Okinawa Soba.

In Japan, soba refers to buckwheat noodles, while Okinawa soba are actually wheat noodles. Okinawa soba is a noodle soup more similar to ramen than Japanese soba. in 1972, when Okinawa was returned to Japan from US occupation, this caused a problem. Japanese trading regulations demanded soba to be noodles containing at least 30% buckwheat, Okinawa soba contained none. The Japanese Fair Trade Commission tried to have the name changed or dropped, but the Okinawans resisted. In the end Okinawa soba was granted an exeption to the rule. Today Okinawa soba is one of the more famous dishes in the Okinawan cuisine. 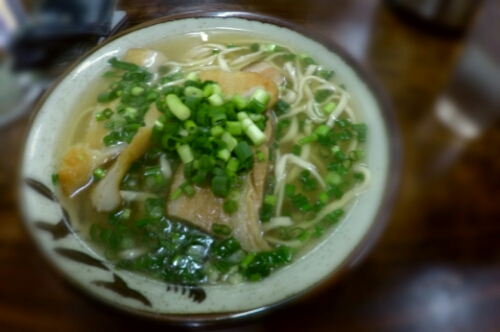 Having Okinawa soba was one of the things on top of my bucketlist when visiting Okinawa. I did not go the first day though, I wanted to meet some locals first, find out where they would go to eat, get some good recommendations. Several people I met mentioned a small soba restaurant not far from my hotel. On my second day in Naha I went there for dinner.

A small restaurant, easy to miss if you did not know about it, fifteen seats inside. I ordered my soba from the vending machine by the entrance, handed the paper slip I received to the old lady standing by the counter. Found an empty seat and waited for my food. It should not be long, soba is considered fast food in Japan Served without a long wait and eaten quickly. 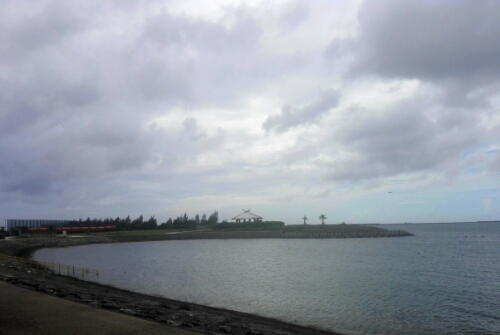 The beach in Naha

The history of this Okinawan dish can be hard to trace, some people even argue that it is only an invented tradition. It has been speculated that wheat noodles were brought to Okinawa by the Chinese, but the hypothesis has been hard to prove. The first historical reference to Okinawa soba is from 1902. However it orginated, Okinawa soba has become an integral part of Okinawan culture and a popular meal throughout the islands.

The soba was great. A very tasty broth filled with noodles, pork and spring onions. More like a ramen than I soba was the first I though, it did not have that fishy taste that often comes with soba in Japan, instead the pork really flavoured the meal, just like ramen in a way. I slurped my noodles, drinking water and green tea with it.

Okinawa Soba is a tasty local specialty, and very different from soba in the rest of Japan. A warm, well-flavoured and filling meal, it is something everyone should try when visiting Okinawa. I would certainly not want to miss it next time I return.