Balkan Ghosts: a Journey Through History by Robert D. Kaplan

I read Balkan Ghosts by by Robert Kaplan in October 2016

Balkan Ghosts is part travel book and part history book. The author, through his travels, is able to tell the history of the Balkan area, mixing his own experiences in with the story of this fascinating region. Completed in 1990 and published three years later, it is a book about the Balkans before the horrible wars of the ninetees, when Nationalism and corrupt politicians set old Yugoslavia on fire. The book did not sell well at first, but saw an increase in popularity when Presiden Clinton was seen with the book. In fact, the book is said to have made up Clinton’s mind not to deploy troops to aid the Bosnian Moslems, a choice the author actually disagrees with.

Robert D. Kaplan is an american author, mainly writing books on politics or travel. He has served on the Defence Policy Board and was named by Foreign Policy magazine as one of the world’s top 100 global thinkers in 2011. Balkan Ghosts is based on his travels in the Balkan region, as well as his extensive historical knowledge of the area. 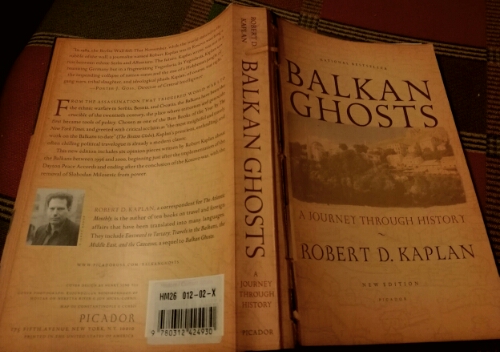 The book is a travel anthology of Kaplan’s travels in the Balkan region, filled with historical information about the area. The book is divided into four parts, divided by geography. Part 1 deals with Yugoslavia, part 2 with Romania. Part 3 deals with Bulgaria and part 4 with Greece, a country the author has lived in. Together they give a good introduction to this fascinating region, and provides you with a well-covered historical background. Kaplan is able to weave his own travel stories and the history of the region together in a way that keeps you reading, never wanting to put down the book.

Balkan Ghosts is a great book about the Balkans even though the latter part of its history, the Balkan War of the 90s is missing. Being written before the war broke out, the book gives a good picture of how the region was before war broke out. Also, the book focuses on the whole Balkan region, not only Ex-Yugoslavia, in fact most of the book is dedicated to countries mot involved in the Balkan War. The author clearly has a vast knowledge of the region, making the book rich in information and a great read. I can without hesitation recommend this book.

For more informations about the Balkans, see my Balkans Travel Guide.