I visited Helios Beer in Okinawa in September 2016

I had seen the place during my walk through the city earlier in the day. A little too early for a beer then, there was still much I wanted to see in Naha, but now, a few hours later a beer would be just perfect. And an Okinawan beer as well. I love to check out the local beer when travelling. I had been walking for hours, having my first look at Okinawa and Naha. I was tired, needed a rest. To sit down in a bar with an ice cold Okinawan beer seemed like a nice way to relax, regain my strength. 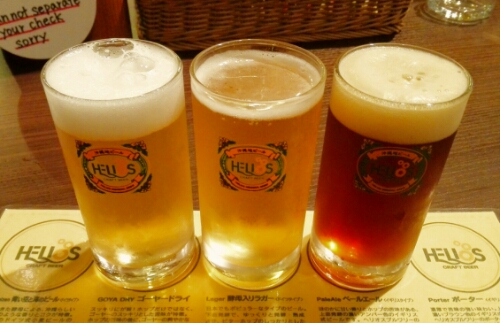 I went inside, got a seat by the counter, had a quick glimpse at the meny before ordering my first beer, their weizen. The bar was decorated in like an old German beer house, or a Japanese old German beerhouse. The Japanese love to make German-style bars, but they never seem to get it just right. It’s not really something I can pinpoint either. In this place the TV showing American movies with Japanese subtitles certainly did not help. The bartender came with my beer. I had a sip. It was good. A clear, crisp taste. Not too much flavour. Very good aftertaste.

I was getting hungry, took a look at their menu. Mostly pub food, and a lot of pork. Pork is a main ingredient in Okinawan cuisine, way more so than in the rest of Japan. While mainland Japan saw pork fall in and out of favour depending on the religious fervour of the current Buddhist ruler, Okinawa, or the Ryukyu Kingdom, never had such religious restrictions on pork. Pork was consumed in large quantities in Okinawa. I found a local dish, the ayu pork sausage, on the menu which I ordered. For drink this time I ordered a tasting set, three small glasses with three different Helios beer. 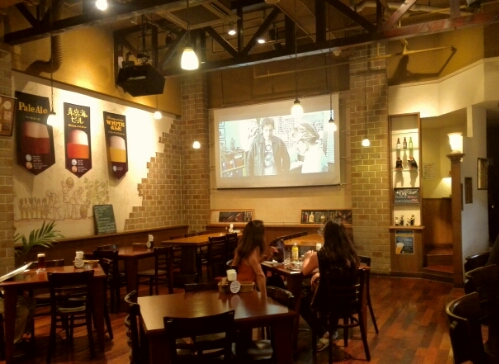 I had just finished my sausage, it was delicious. A lightly cooked, perfectly flavoured pork sausage, still sizzling when served, when a couple sat down next to me in the bar. They looked Northern European, even Scandinavian. Actually they looked Norwegians. Then they started talking and I knew. Not only were they Norwegian, he was from the same city as me. What are the odds. I quickly turned towards them and introduced myself. If I waited to do this, things could get awkward. I did not want to be seen as an eavesdropper.

They had been travelling in Okinawa for a week, this was my first day. We had a nice chat over a beer. I got some tips on what to do in Okinawa and I gave them some recommendations in Tokyo, where they were going next. 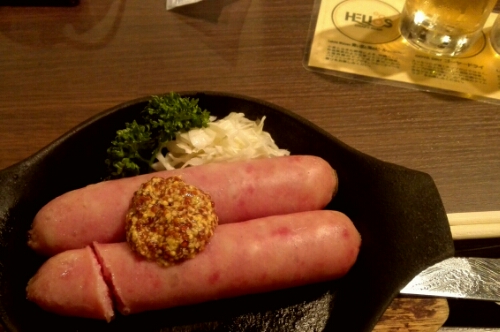 I ordered one last beer before leaving. I was chatting away with the two Norwegians, having a great time. Did not want to go yet. We talked about our experiences travelling, mutual friends back in Norway, our impression of Naha. They finished their beer before I did, and left, giving me a few minutes to write in my journal before leaving myself. It was getting late and time to go home. I needed to be rested before tomorrow, ready to explore more of Naha.

Helios Beer in Naha is a nice, German-style pub selling local beer. They also have a large selection of tasty pub food. The beer is quite good, my favorite was the weizen. Being in Okinawa, prices are cheaper than the rest of Japan making a visit not put too big a dent in your wallet. If visiting Naha I would certainly recommend a visit to Helios Beer.