Usually when I travel around Japan I use trains. Shinkansen for longer distances and express or local trains for shorter distances. With a Japan Railpass I can ride the usually expensive Japanese trains as much as I want for a fixed price, and in Japan there is always a train leaving. Add the speed and comfort of the Shinkansen and train journeys become a great way to travel. It was first on my fourth trip to Japan that I had a domestic flight.

I was going to Sapporo, far up north on the island of Hokkaido, and the shinkansen don’t run that far yet. There are specific plans of extending the line, in 2016 the shinkansen started operating as far north as the south tip of Hokkaido, but the line to Sapporo is not scheduled to open before 2031. Therefore I chose to fly to Sapporo.

Tickets from Tokyo to Sapporo and back were not too expensive, flying with the low cost carrier Vanilla Air. I was staying for a week in Hokkaido, first in Sapporo and then skiing in Niseko, and did not have to bring more than a carry-on. All my skiing gear I would rent in Niseko.

As I got of the train at Narita I had to change terminals. I faced a ten minute walk from terminal to terminal. I have hear many Japanese complain about Narita. It is far from the city, big, complicated. Too far to walk to places. I could see why. Luckily I had plenty of time and a ten minute walk was no problem. The walkway was decorated for the 2020 Olympics, running tracks were painted on the ground. I did not feel like running. 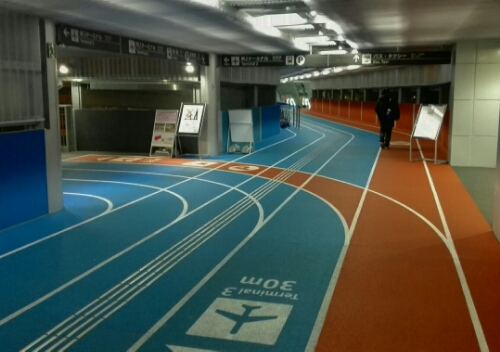 Narita Airport getting ready for Tokyo 2020

At the Vanilla Air check-in counter I first thought I had to stand in line, maybe fifty people were waiting to check in. Then I saw the automatic check-in machine behind the line, I guess they were just waiting to drop off their bags. I was glad I only had a carry-on, headed for security after checking in.

I remembered I had a bottle of Coke in my bag. I quickly fished it out, drank it all in large sips. Threw the bottle away. As I got to security I noticed many people were bringing liquids with them. The no liquid rule does not apply on domestic flights in Japan.

As I made it through security I discovered that all shops and restaurants were outside. Here there was only a small shop selling various souvenirs and some drinks. I stacked up on some Japanese sweets, wasn’t particulary hungry anyway. I found a charging station by the window, where I could sit, charge my phone, watch the planes take off and land. 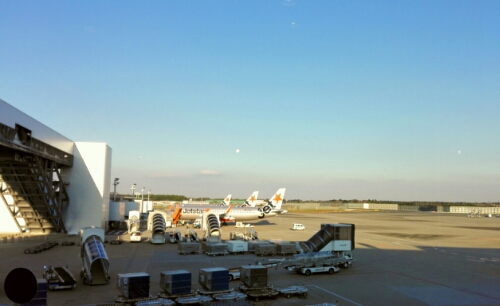 Waiting for my flight

Not long after the plane boarded, we were taken in a bus out to the plane. Boarding went quickly and with no problems. I found my seat, sat down. More room for my legs than I expected.

Being in the air with Vanilla Air was surprisingly comfortable. They had a good selection of food and drinks for sale, prices were not too high, and instead of coming around with a trolley, us passengers would call the flight attendants by pressing the call button, the flight attendants would come running. You did not have to wait while the trolley made its way down the aisle, you could call for service at any time. More work for the crew, but so much more convenient for the passengers.

During the flight, the seatbelt sign went on a few times as we went through som turbulence. Nothing bad, just some minor shaking, I actually kept hoping for more since listening to the flight crew trying speaking English and trying to pronounce the word ‘turbulence’ was quite funny. 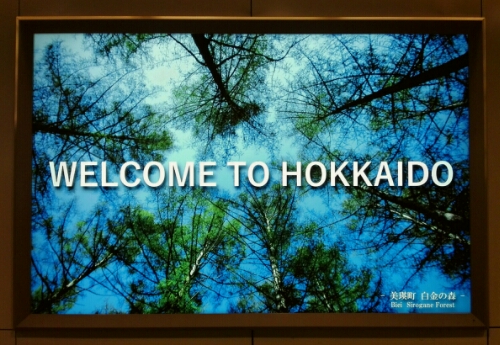 Usually when travelling in Japan I use the train, and will probably continue to do so. Trains in Japan are fast, reliable and comfortable, and with a Japan Rail Pass not too expensive. Trains will probably stay my method of travel in Japan in the future, but flying in Japan is very comfortable. Some places are impossible to reach, or to hard to reach, by train, and flying is then a good option. I did not expect flying in japan to be uncomfortable in any way, and my expectations were met.