Sapporo, despite actually lying just south of Nice, France, can be a a city of cold and snowy winters. With the Siberian High front developing over Eastern Russia and the Aleutian Low front developing north in the Pacific Ocean, a cold flow of air comes from the north and down to West Hokkaido. The result is usually cold and snowy winters, almost six meters of snow on average. In Niseko, a few hours by car from Sapporo this results in a ski resort with some of the best powder snow in the world. In Sapporo this means freezing winters, much trepidation, but also warm periods melting the snow to water which becomes ice due to the Heave, the cold ground. A problem also known in Norway.

In Norway we usually solve this problem by dumping large amounts of sand on top of the ice, creating a safe surface to walk on. Cars from the city are out every night in icy conditions to spread the sand. The owners of buildings have to keep the sidewalks outside their shops free from ice or covered with sand so that people can walk safe. Salt is also used. This of course means a massive clean up job in spring, as all the gravel must be removed. In Sapporo, most of the sidewalks in the city are heated, keeping them clean from snow and ice. But they have also found another genious solution saving the city lots of work. 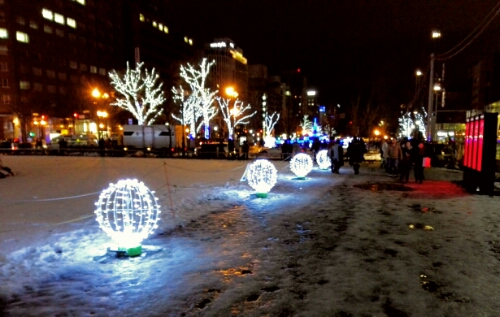 Chtistmas illumination in Odori Park is held every winter in Sapporo

I was out walking in Odori Park, had just left the christmas marked where I had warmed myself on a Glühwein, now I started walking down the park, westward, wanting to see what that part of the city had to offer. Winter in Sapporo is quite charing. Much of the park was decorated in christmas lights for the holidays, it was the Winter Illumination Festival. Now, in daylight, it did not look that impressive. Much more so at night.

Eventually the lights were gone, I was out of the festival area. Odori park is a long and narrow park in downtown Sapporo. Squeezed in between two roads, as wide as a small city block. In one end stands Sapporo TV Tower, in the other direction it goes on and on and on. As I walked through the parks the road got slippier and slippier, eventually a thick layer of ice covered the path. I had to be very careful when I walked. But then I saw it, my salvation. No more worries about icy conditions. Never fear falling again. 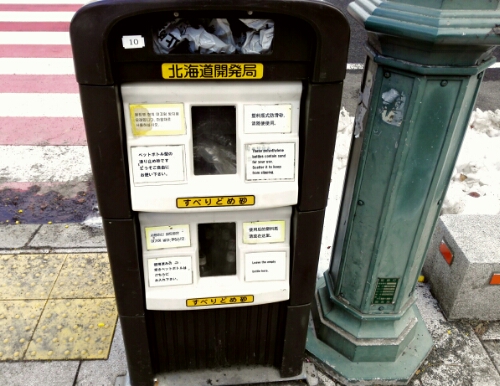 Keep safe during winter in Sapporo

Along the path, every now and then, stood a box. And within the box lay several small bags of sand. Sand which you could throw in front of you as you walked. What a great idea. You did not have to worry about falling again, could sprinkle sand wherever you walked. Nobody had to be employed doing it and everybody just sort of helped each other. If you made your path safe, the person after you would also walk on the sand. Eventually the roads would be safe. Just by people making sure they are themselves safe. I found it quite funny and clever. All the sidewalks in Sapporo seems to be heated, only the paths through the parks are not. And by leaving sand here people could spread it themselves. 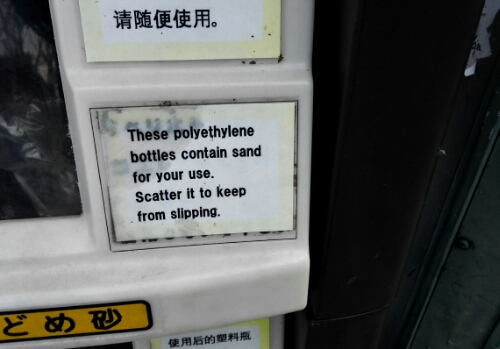 Help yourselves during winter in Sapporo

I continue down the park, keeping the path in front of me safe with the sand. Eventually I come to a path that is heated. No more ice to worry about. A box stands there where I put my bag with the leftover sand. Japan always seem to do things different to the rest of the world. This is just another solution to the problem of slippery roads.

The next day I was in Otaru, a small town just west of Sapporo. There they tested using crushed scallop shells instead of sand to keep the roads unslippery. This apparently since the scallop shells were of a lighter colour, keeping the sidewalks more beautiful. It certainly looked better than when sand is used. 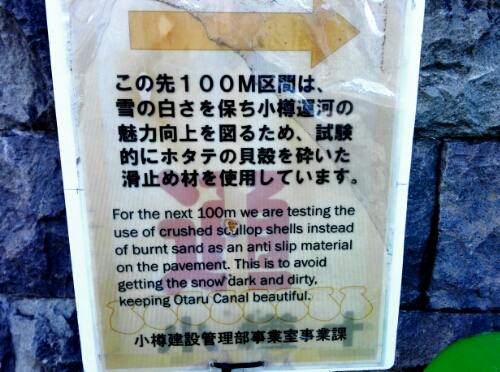 2 thoughts on “The Icy Roads of Sapporo”