I visited Bar Atomic Age in Susukino, Sapporo in December, 2015

I could not believe it, in front of me was a bottle of Linie Aquavit. Norwegian Linie Aquavit. Named so because it crosses the Equator twice in its production. It is transported from Norway to Australia and back on a ship. 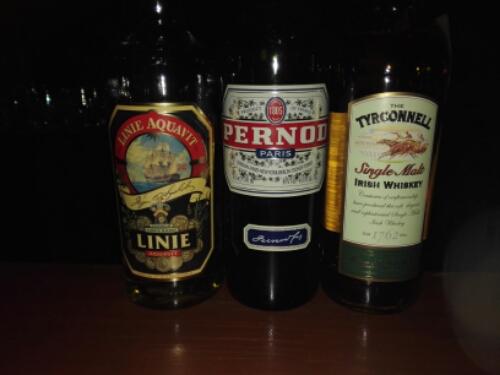 Aquavit is a Norwegian christmas tradition, the spirit goes well with all the fatty meats consumed at the end of the year. And keeps a cold body warm in the winter months. I had not expected to find it in Japan, now the bartender had pulled out a bottle from somewhere. It was christmas eve, I was amazed.

He poured me a large shot of the aquavit, poured one for himself and the other guest as well. We toasted, then drank the aquavit. It was delicious, it tasted of christmas. The bartender seemed to agree, the other patron not so much.

I was on my way back to the hotel, walked through the Susukino district of Sapporo, planned for an early night in my capsule. Get some sleep, wake up fresh and ready tomorrow morning. I was not far from my hotel. 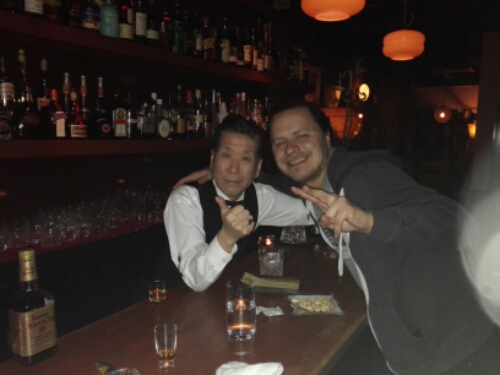 The bartender and I at Atomic Age

I don’t know what made me stop, it was snowing, not much, just a little. A tiny layer of snow on the ground. I stopped in front of a narrow staircase leading up to the second floor. A sign stood at the bottom of the staircase. Bar Atomic Age.

At first it was only the bartender and myself in the bar, I had my beer in silence, wrote in my journal. The bartender was busy polishing the already polished glasses. He looked at me, asked: ‘Where are you from?’

Another guest came in the door, sat down two seats down from me, ordered a gin and tonic. He nodded at me as he sat down, I nodded back. Before I knew it the three of us were engaged in conversation, their English weren’t to good, my Japanese almost non-existant, but somehow we managed. Google Translate always helps. 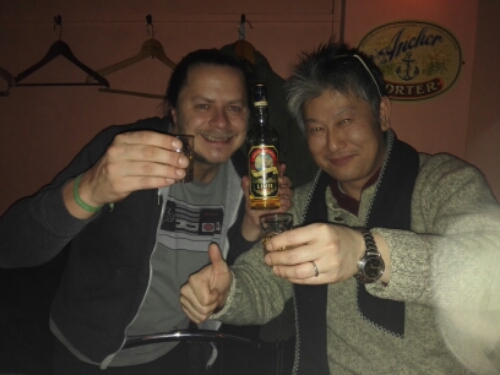 Drinking Aquavit with one of the regulars

I did not leave after the first beer, not the second either. I had a great time in the bar, a few more patrons dropped by. It seemed to be a proper local bar, same regulars dropping by every night, they all seemed surprised to see me. They all came up and introduced themselves, started talking to me. Apparently I was the first gaijin, or foreigner, to visit the bar.

It was a lot later than planned when I finally left the bar. I was tired, but happy. The bar had been great, I had met so many awesome people, and even been served Aquavit on Christmas Eve. I headed out into the snowy streets of Susukino in Sapporo, on the way back to the hotel. In my hand I was carrying a bottle of Korean Yogurt Liqueur the bartender gave me as a gift when I left.