As it got nearer to the New Year, only minutes away now, everyone gathered inside. All the staff from TOWA, the soba restaurant next door, owned by the same one who owned the bar, came as well. Not like Norway at all. In Norway we all go out at midnight to watch the fireworks and wish friends and strangers happy new year. Here there were no fireworks, we all stayed inside the bar, the sake was passed around. 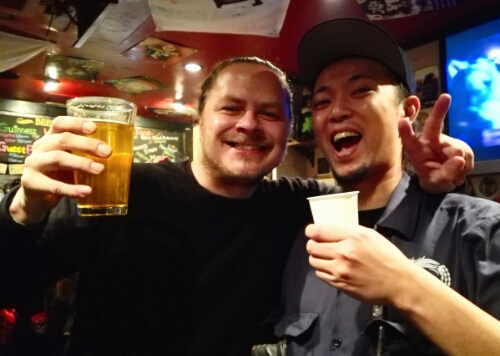 A friend and I at New Year’s eve in Japan

As the New Year approached, the countdown started. That part is the same as in Norway at least. Except we don’t do it in Japanese.

I was celebrating New Year’s eve in Japan, the new year only a day away now. I was travelling by myself, needed to find something to do. I had been reading about the Japanese New Year’s celebration, that did not get my hopes up. New Year’s eve in Japan is usually celebrated with family, you visit the temple, spend time with your closest friends and relatives. I wasn’t sure what to do really, would any bars even be open? I was sure some would.

I had just returned from my ski trip to Niseko, hadn’t had much time to plan. On December 30 I still had no idea what to do on New Year’s Eve, but I was certain it somehow would, as always, work out.

On New Year’s Eve, after having soup curry at one of the local restaurants where I lived, I headed for the train station, caught the first train to Shibuya, where I transferred to the Yamanote Line. It would take about half an hour for it to reach my station, from there only a short walk. I knew exactly where I was going. The train was crowded, but not too full. Some people were dressed up, looking like they were going to a party, most people looked normal, then again, wearing a suit is the norm for men in Japan. And women dress differently than women in the west. For all I know, they could all be dressed up for a party.

They were serving ozoni, a traditional Japanese soup for New Years, with moshi in it of course. Sticky rice cakes, which every year kills between five and ten people. If not chewed properly it can stick to your throat and suffocate you. It is mostly the elderly who die of eating moshi, I made sure to chew a little bit more anyway, just in case. I seem to have survived. 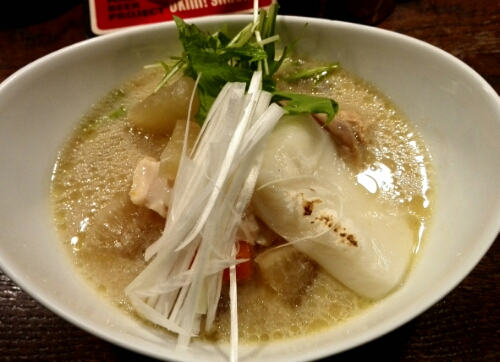 The soup was tasty, as I have come to expect from Japanese food now. A thick, umami flavored broth, delicious sweet, sticky moshi, some meat and vegetables. I finished every last drop of it, ordered one more before the clock turned 12.00.

The TV in the bar was showing MMA the whole evening, apparently a tradition in Japan. Not really my thing, but when it is the only thing on TV your eyes get drawn to it. Around me, the Japanese were watching it closely, cheering for their favorites and trying to get me interested. I got a long story about every fighter. Their strengths, weaknesses and if they were favorites or not. It did not take me long to forget it, it is hard to remember something you are not interested in. MMA on TV is a new year’s tradition I am glad we do not have in Norway.

I was sitting in a bar in Shimokitazawa the night before, chatting with the bartender. He was going to a party the next day. I was unsure what to do. I was thinking of going to Shibuya, had heard a lot of people gathered there. He said no, I should rather try to find a bar that is open. I thought of The World End, my regular bar in Tokyo straight away. I texted the manager, asked if they were open, and quickly got a reply. ‘Yes we are open. Come and party.’ It seemed I finally had plans for New Year’s Eve in Japan.

Everyone started shouting, all of them in English. The World End was packed by now. We cheered, drank our sake, hugged, wished each other happy New Year. Another year had passed, a new one lay before us.

I had booked my trip to Japan during the New Year celebration without doing much research concerning how the passing of the year is celebrated in Japan. As I started to read  about the Japanese New Year Celebration I became a bit sceptical. I read that New Year’s was a family holiday, everybody stayed at home, nothing to see for a tourist really. And in the week after New Year’s day, the whole country shut down and people went to stay with their families. It was a week of holidays. 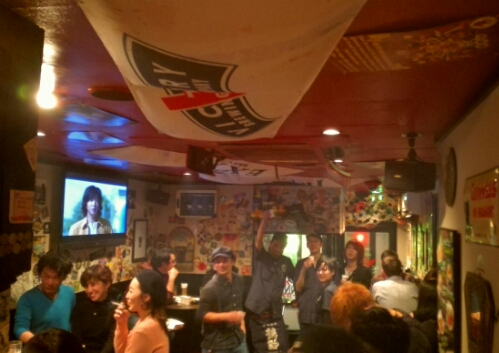 Inside The World End at midnight

I did not find this to be true. There was a lot of people at the bar, in the streets, on the trains. I never had a dull moment in the bar, met many old friends and made new friends. A few hours after midnight we went to a temple in Akihabara, the place was packed. In quite a small temple, hundreds of people were gathered to pray, and outside many more were eating and drinking at the food market set up for the night.

The week after New Year’s day, some restaurants were closed, a few others had a limited menu due to no delivery. A few bars were closed as well, but stores seemed to be open. Maybe Tokyo is different from the rest of Japan, but I did not notice much difference. It seemed like any other time in Japan really, except when going to the temples. I’ll save that story for my next post.