I celebrated New Year’s Day in Japan in 2015

The throng of people started already at the Harajuku train station. Everyone on the Yamanote Line was getting off here, long lines of people were forming at the ticket barriers. As we got out of the station, into the large open area in front of Meiji Park, it was not so packed anymore. But a steady stream of people were exiting the station, everyone heading in the same direction. 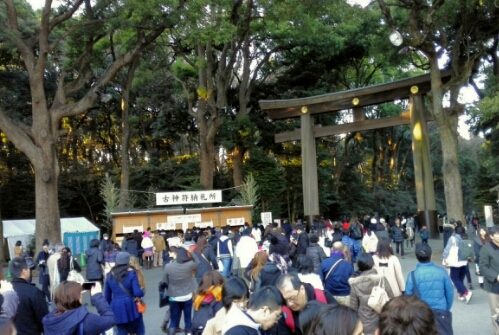 Outside Harajuku Station on New Year’s Day in Japan

I headed towards Meiji Shrine. It would have been easy to find even if this had been my first time here. Everyone were heading in that direction, coming from the train station, then walking under the torii gate and down the road towards the temple. The closer we got, the more people it seemed to be. 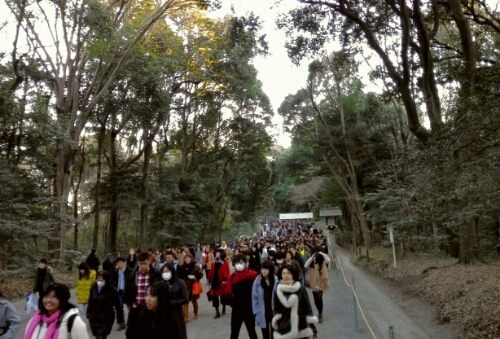 Heading for the shrine

Visiting a temple or shrine at the start of the new year is an important part of the New Year’s celebration. The Japanese flock to the temples for the Hatsumode festivals, to obtain charms for the new year, say a prayer at the shrine, but also to eat, drink and have  good time. Food courts are set up at most temples, offering all kinds of street food. The Meiji Shrine in Tokyo attract more than a million visitors during the first few days of January, causing long lines at the entrance to the shrine. 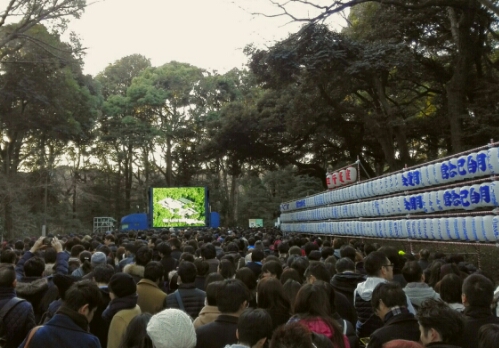 Waiting in line for Meiji Shrine

As we got closer to the shrine, more and more people crowded the road. Salarymen in suits rushing towards the temple, teenagers in large groups, lovers hand in hand. But most numerous were the families. Mothers and fathers out with the kids, going to the shrine on New Year’s Day. The small ones in a carrige, the larger ones running around, looking very cute in their little kimonos. 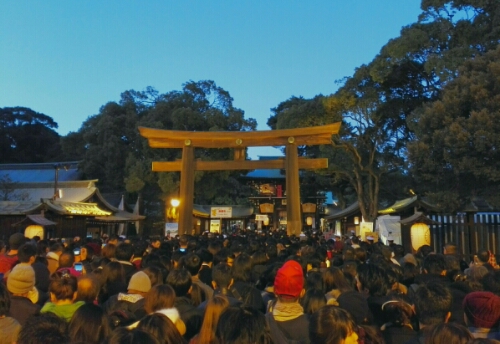 I am getting closer to the shrine

A few hundred meters from the shrine the mass of people got to big, a massive line formed. It was a wide road, twenty to thirty people could stand side by side, and it was still a long way to the shrine. Thousands of people must have been there. Now there was nothing to do but wait.

You would expect there to be a little bit of chaos with this many people waiting in line. Some pushing and showing, someone trying to cut in line, sneak past people to get there faster. But none of that happened. Everybody waited patiently in line, leaving a little bit of space between each other. No one pushing from the back. I was in Japan, where everyone knows how to behave. 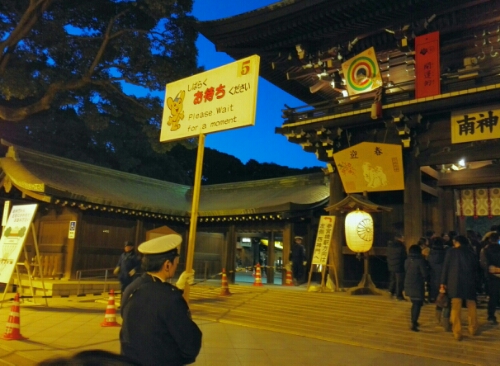 As we got closer to the shrine, security guard with ropes separated us into smaller groups, letting one and one group into the main shrine so it would not get too crowded. The system worked perfectly, everybody kept their place in line. The Japanese and their adherance to order still impresses me, and I try to bring some of it back to Norway. 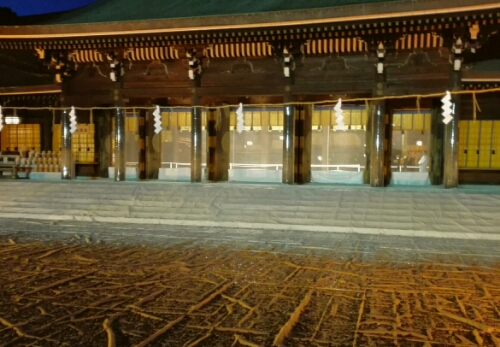 The front of the shrine covered in coins

I finally made it to the front of the shrine, and some of that order disappeared. People were pushing, trying to get close to the shrine. I squeezed forward as far as I could, gave up trying to make it all the way to the front. Got a coin out of my pocket, threw it onto the shrine, did the customary clapping and bowing, made my way to the back to make room for someone else. Around me people were doing the same thing, coins were constantly flying through the air, over the heads of the crowd, to land at the shrine. People were stopping to clap and bow, seemingly oblivious to the pushing crowd surrounding them. 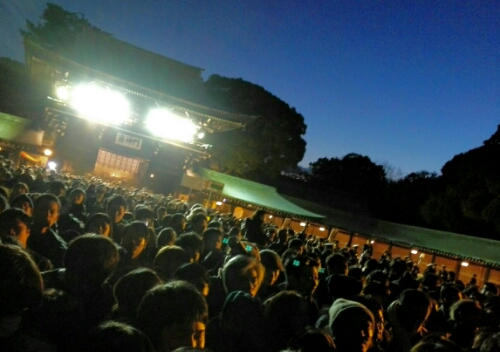 People pushing to make it to the front of the shrine 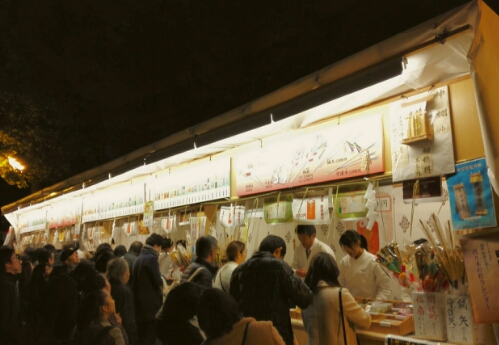 I exited the area, found myself in a huge market, charms and shinto trinkets being offered everywhere. Every New Year, people bring their old charms to the temple to be burned, picking up new charms for the new year as they leave. I found a stall with not too many people in front of it, picked up a few charms myself. Cheap little souvenirs from my New Year’s Day in Japan. 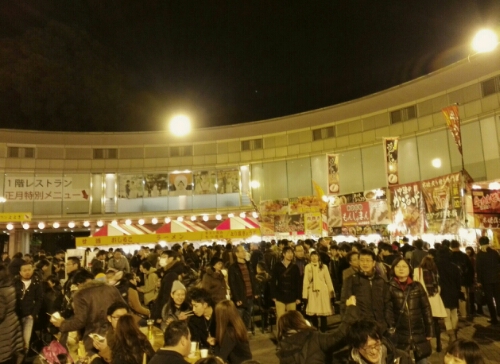 The temporary food court set up for the New Year celebration was huge. Close to fifty food stands in all, and a large seating area in the middle. Most seats were taken, and more people were standing or walking around. Everyone nibbling on something. A delicious smell came toward me, all kinds of flavours mixing together. Grilled meat, fish and octopus. Sushi, soy sauce and wasabi. The smell of okonomiyaki, the most tasty pancake I have ever tried. Takoyaki. Yakitori. Every smell of the Japanese kitchen it seemed. 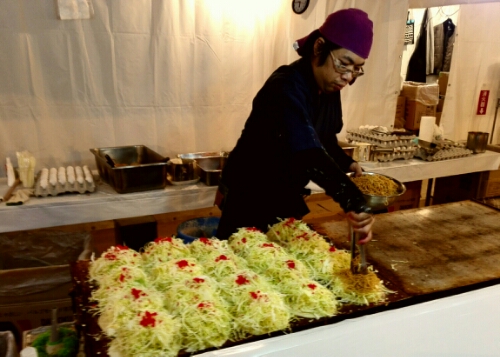 I bought myself a large plate of Osaka-style okonomyaki and a cold Asahi beer, a great end to my visit to Meiji Shrine. I found a seat at one of the tables and enjoyed the tasty food as I sat and observed the people around me. It was New Year’s Day, I was in Japan, far away from friends and family. Everything was so different from back home, I was loving every minute of it. Celebrating New Year’s Day in Japan is certainly a memory I will cherish for ever.