I read History of Iceland in December 2016

Iceland, that small island all alone up north in the Atlantic ocean. A country of vikings, sagas, volcanoes and geysirs. A country that almost took over the financial world before being dragged back down by the 2008 market crash. A country where a volcano grounded almost all European air traffic for weeks. And a country where one of the great showdowns of the Cold War happened, over the chess board that is. It might be a small country but it is a country with a long and proud history.

In History of Iceland, the author tells the story of Iceland in a entertaining and prcise way. Jón R. Hjálmarson is an Icelandic historian and linguist, having studied in Norway, Iceland and the US. For several years he served as a regional administrator of education in South Iceland while guiding foreign tourists in his spare time. His experiences as a guide to tourist helped inspire him to write this book. 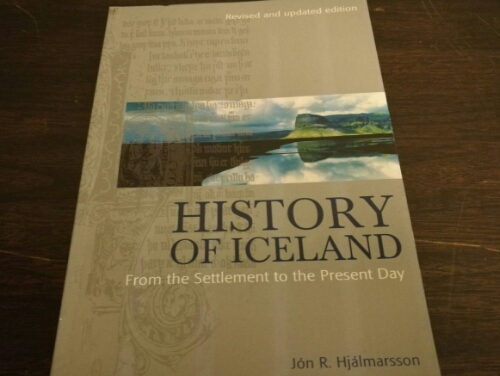 The book is well written, easy to read and very informative. The book covers the history of Iceland from the settlement by Norwegian vikings in the ninth century up to the year it was written, 1988. The last twenty years of history is missing, which is a shame, since these years have been turbulent years for the island-nation. I would also liked the book to cover a bit more of the history before the settlement. How Iceland was formed and more detail about the Irish monks living there when the Vikings arrived.

Sometimes the book also feels a bit like a textbook. The book does a good job of covering Icelandic history, but at times I feel there is too much fact and not enough story. A few choice anecdotes connected to the subject being discussed would in my mind improve the book and make it easier to read. But overall the book was a good read, interesting and educational about Iceland.

History of Iceland is a great introductory book to Iceland and its interesting history. From settlement by vikings, the creation of the world’s first parliament, the country under Norwegian and Danish rule, the allied occupation during World War Two and the subsequent move to total independence up to the creation of an independent Iceland, the Cod Wars with Britain over fishing rights and the modernisation and wealth creation happening in the eightees.

The book is well worth a read, even though a new edition with extra chapters covering the final thirty years would make the book much more relevant. Luckily much is written about that lately and can be found in other books.