I would start every day with an espresso at Caffe’ del Duomo on the square just outside our apartment. The sun was up, warming up the air slowly. It was so nice to sit down in a chair, relax, enjoy a cup of coffee. The town was still quiet, but starting to wake up. A few people hurried by on their way to work, tourists waking up early passing by on their way to the next site. Walking the old Via Appia, that old Roman road. It was not that warm yet, but you could feel the temperature slowly rising. Eventually I took my jacket off, a t-shirt was enough. A coffee in the morning, outside, watching the city come to life. What a great way to start the day. 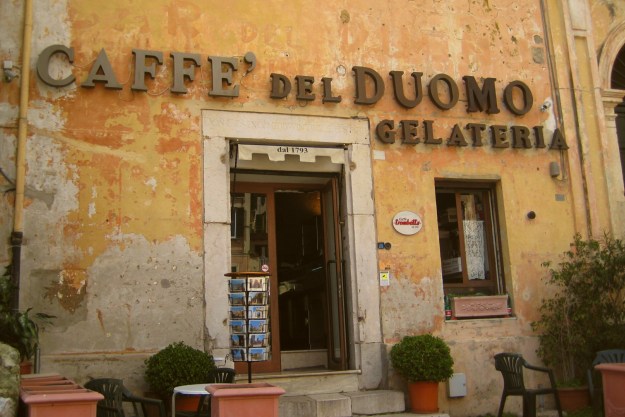 The old city of Terracina is built over Roman remains, the present piazza built over the Roman forum, the cathedral built where an old Roman temple used to stand. Parts of the temple are still visible but most of the ruins have been destroyed and rebuilt over the years. The old town still looks like a medieval Italian town, small brick houses clinging to the hillside, old city walls, ancient architecture. Built with seemingly no master plan, the streets and alleyways meander between the buildings, twisting and turning around the old stone houses.

In the fourth and fifth century BC, Terracina fell in and out of Roman hands. It was held by the Roman Empire in 509 BC, then lost and recovered several times over the next hundred years. Terracina was finally secured by a Roman colony in 329 BC. Seventeen years later construction of the Via Appia started, a strategically important road in the Roman empire, passing right through Terracina. The Via Appia was the first major road being built in the Roman empire, built for the purpose of transporting troops and supplies. Terracina’s position along the Via Appia close to Rome made it an important city, both strategically and financially. The Via Appia still exists today, although it has been repaved on several occations. 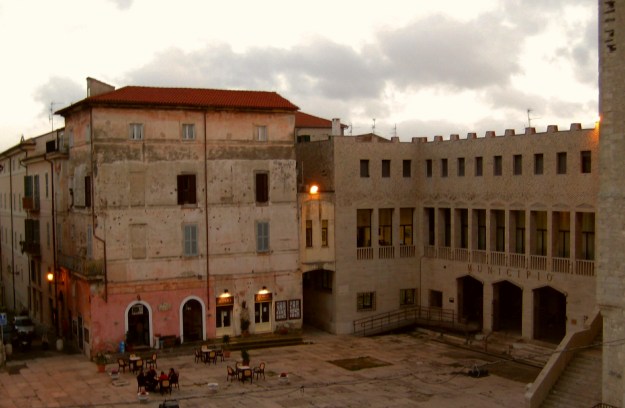 The square outside our apartment

There were many good restaurants not far from the apartment, but hard to find one where there would be no other Norwegian patrons. It seems Terracina has become a popular spot for people from Norway to buy a holiday apartment. I guess the cheap prices, good food and warm weather draw people from the cold North. Sometimes it seemed there were Norwegians everywhere. One time we went to a restaurant and there were only Norwegians visiting the place. A bit annoying, but at least the food was great. When leaving the old town, it was harder to find Norwegians. It seemed they all congregated to the old town and the beach.

On my first visit to Terracina, a new bar was opening just down the street from where we lived. My friend and I were on our way home one night, up until then the place had been closed, under construction. That night the scaffolding was gone, replaced by people. The place was packed inside, most people were left standing in the streets. Waiters rushed back and forth, carrying beer after beer to those outside.

I remember talking to some girls that night, one of them studied to be an English translator, had only one semester left of her studies. Still she could hardly speak English. How she could work as a translator I could not fathom, she could hardly string together a sentence in English. Hopefully her written English was better, and she would only translate written texts. 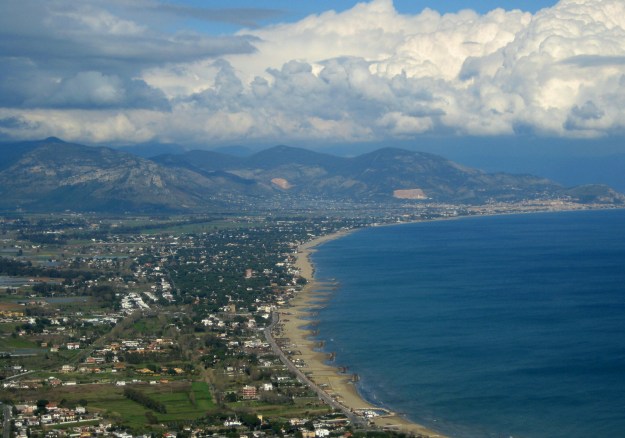 View of Terracina and the bay

When I returned to Terracina, four years later, the place was still open. But a lot more quiet. Only a few people visiting this time, more than enough room, easy to find a seat both inside and outside. Nothing like the opening day. Situated on top of a hill on the way to my apartment, it was a nice place to sit down and relax, enjoy a cold beverage, rest a bit before walking the final stretch back home.