I visited Okinawa and tried Awamori in September 2016

The bartender fills the glass with ice cubes, then pours the spirit. Only half full. He tops of the glass with water. A quick stir, hands me the glass. I bring it to my lips, take a small sip. No strong flavours right away, a hint of tequila maybe, but very mellow. A little bit sweet. Not my favorite drink, but quite good. Very watery when mixed this way. I look up at the bartender, points to my awamori. Suki desu, I say. I like it. I take another sip, larger this time. I could drink this.

Okinawa, now a part of Japan, was for a long time its own kingdom. For hundreds of years, the Ryukyu Kingdom remained independent from Japan, until it was annexed by the Meiji government in late 19th century.  Following World War Two the islands came under US occupation, it was not until 1972 that Okinawa once again came under Japanese administration. For a long time the island chain was free to create its own customes and culture, its own Culinary traditions, and its own alcohol. Situated between Japan, China, Taiwan and the Phillippines Okinawan culture has been influenced by many nations, much more so than the four main islands of Japan. 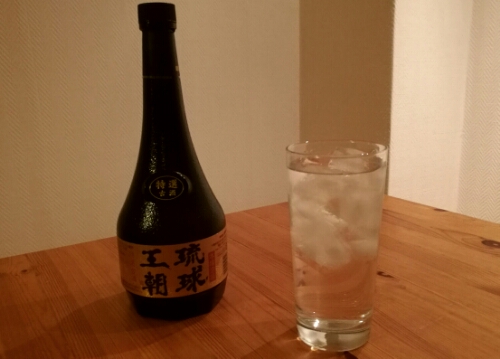 A glass of Awamori

Awamori traces its roots back to a Thai drink called Lao Khai, a popular homebrew in Thailand. In the 15th century, Okinawan traders brought the drink to the islands, the drink quickly became popular and the distillation technique was made more suitable to the subtropical climate. To this day awamori is made from Thai rice. Okinawa is simply not able to harvest enough to meet demand.

After my first taste I end up ordering many more during my stay. The locals get so happy when I order their drink, people start talking to me, I make many new friends due to an opening conversation about awamori. I came to like awamori more and more, after a few days in Okinawa I loved it. At first the smell can put you off, but once you get used to it the drink is quite refreshing. 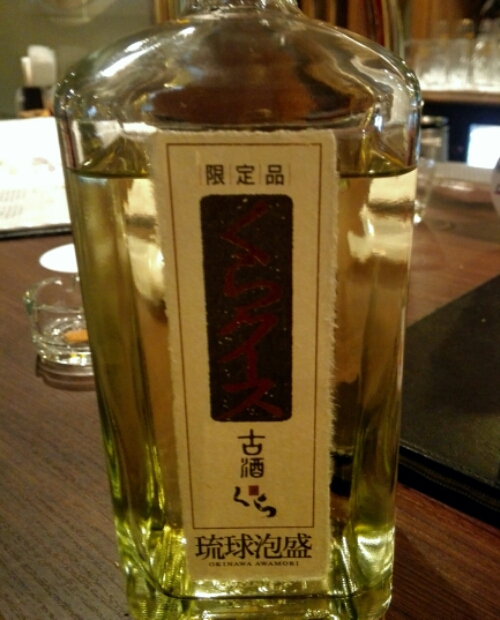 A bottle at Helios Bar in Naha

Awamori is served at almost every bar and restaurant in Okinawa, from the hole in the wall pubs to fancy cocktail bars. Aged awamori, or kusu, has aged in clay bottles for at lest three years prior to bottling. Some of these varieties has been stored for decades and can fetch a very high price, at $50 or above for a glass. On the other hand, the cheaper stuff at the local bar sells for a few hundred yen. Usually mixed with water, it can also be drunk straight, served with oolong tea or as a part of a cocktail.

If you ever are visiting Okinawa, make sure to try some of their awamori. In fact, try it twice. The first time it might put you off a bit, it just takes some time to get used to. It is an integral part of an Okinawan meal or night out, a drink that has seeped into their culture. As I am writing this I can’t help myself. I have to stop writing now. I am going to pour myself an awamori. I have a bottle at home, a gift from one of the many great people I met in Japan.

In Okinawa I had Awamori at Helios Brewery Pub, Output Rock Bar and in Sakurazaka.