I visited Output Rock Bar and Sakurazaka in Naha, Japan in September 2016

‘You know what’ the bartender says. ‘I close the bar, then we go to Sakurazaka. I can show you good bars. Real Okinawa nightlife’ He has been telling me of this great bar district in Naha, Sakurazaka, he compares it to Golden Gai in Tokyo. Now he apparently wants to show it to me. Never mind he is currently working. It is a slow night, closing the bar won’t make much of a difference.

I had dinner at a okonomiyaki restaurant in Naha, had come across it walking around the city after visiting Shuriji Castle. Food had been great. A delicious Japanese pancake filled with seafood and bacon. I was unsure what to do next. It was starting to get a bit late. Either I go back to the hotel and rest or find a bar to grab a beer at. As I stood outside the restaurant pondering this question, I notice there is a rock bar and live house next door, Output Rock Bar, it is in the basement of the building. I love rock. I like bars. The question is settled. I am getting a beer. I walk down the stairs and enter. 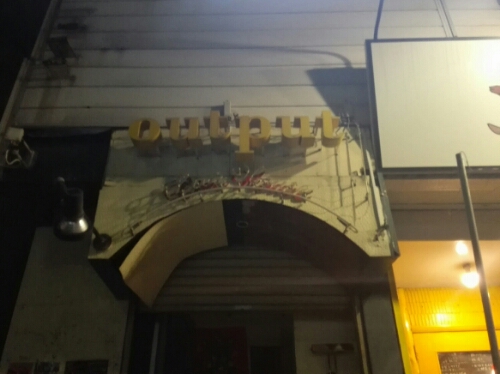 There was no one in the bar when I entered. Only the barkeeper. I took a seat at the bar, ordered an Orion beer, the local cheap lager. It was very cheap compared to Tokyo. It was not a very big bar, a few seats along the counter, a DJ-table and a tiny dance floor. There was also a stage but it was closed off behind curtains tonight. Only open for concerts.

Almost no one else came to the bar that night, I spent my entire time there chatting with the bartender, discussing Okinawa, Japanese music and live houses in Tokyo. Ha had moved to Okinawa from Tokyo, from Shimokitazawa in fact. Where I use to stay when visiting Tokyo. An area of Tokyo I know quite well now. We had much to talk about. I was halfway through what I thought would be my last beer, was planning of going back to my hotel, when the bartender offered to close up the bar and show me some cool bars in Sakurazaka. It was an offer I could not turn down. 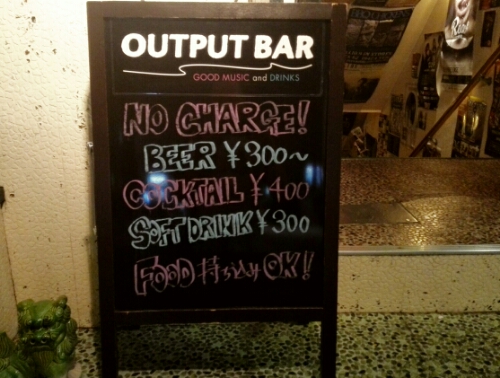 The priced at Output Bar

The bartender quickly closes up the bar, finds me a taxi and tells the driver where to go. He is biking himself, can not leave his bike here. He will meet me there. He tells the taxi driver several times where to drive me, I find him overly cautious. Sakurazaka is only a short ride away.

Sakurazaka has seen a resurgence in its nightlife in recent years. A popular bar district in Naha during the American occupation, it saw visitors decrease dramatically after Okinawa was handed back to Japan in 1972, as the Japanese started going out elsewhere. In recent years people has started to come back and the number of bars has gone up again. People from Naha likes to compare Sakurazaka to Golden Gai in Tokyo, a small part of town filled with street after street lined with bars.

The first bar we go to is closed for a private party. We then end up at another bar, a cheap joint, looks a bit shady. Old, worn furniture. In desperate need of a makeover. This one with some water damage in the ceiling from the last typhoon that passed through. There are many bars like this in Japan and I love them. The posh, fancy places are not for me. I rather go to an old, dark bar. With regulars sitting perched over their glasses. A bartender who knows everyone. This felt like that kind of place immediately. 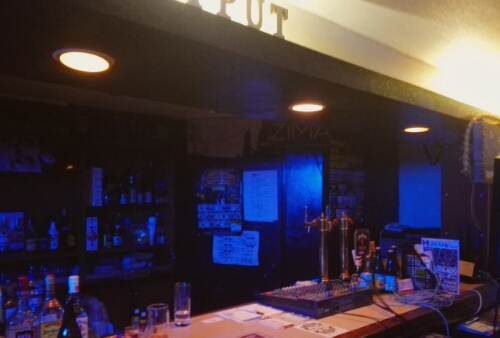 The bar at Output

A few people are sitting at the bar already when we arrived, the bartender, behind the bar, the drunkest of them all. We get each our seat at the bar, says hello to the other patrons, order an awamori each. The local spirit, mixed half-and-half with water.

An hour later, everyone in the bar knows each other. We have been talking since we arrived, I am having a great time. I love meeting new people while travelling, now I have made many new friends in Naha. And so much easier at a place like this than at a more high-class bar I think. The bartender from Output Rock Bar, who took me here, has gone home, quite drunk, but not before making me promise to come to a party at his bar the next night. It seems bartenders in Okinawa have a liking for drinking at work. The bartender at this bar is sitting, half asleep, leaning against the wall, on a bar stool behind the bar. He has been like this for a long time now, almost passed out, too drunk, just waking up to serve more drinks. Something he does by habit I guess. Suddenly he gets up and yells: We go to new bar. Rets go! 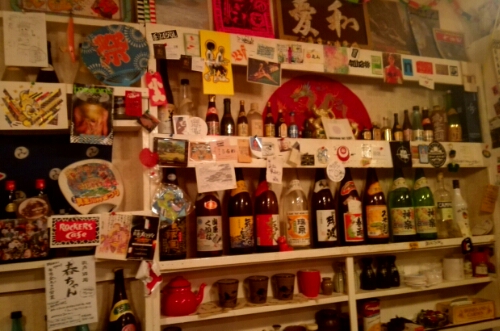 The first bar in Sakurazaka

He closes up the bar faster than I though humanly possible, especially for someone sleeping a minute ago, though I think all he did was turn off the lights. We all find ourselves sitting in the dark, the bartender already at the door. How he got past us without me noticing I have no idea. Twenty seconds ago he was sitting on his bar stool, half asleep. In that time he has woken up, proclaimed our departure, closed up the bar and gotten to the exit. The rest of us stumble after him, trying not to walk into something in the dark. The guy in front of me screams out in pain as he stubs is toe against a chair.

The bartender, zig-zagging down the street, takes us to a bar just a minute walk from his bar. A karaoke bar. They are everywhere in Japan. With the drunk salaryman sitting alone at the bar, singing his hearts out. The group sitting in a cubicle, usually an older man surrounding by a group of young guys. You can spot from miles way who is the boss. They all keep serving him drinks, laugh at his jokes. Look to him for acceptance.

We get our own cubicle. Sit down. There are five of us now. Three guys from Tokyo came with us from the last bar. The two locals left. The drunk bartender orders us a beer each and a large bottle of awamori, the local spirit, to share. Way too much for the five of us. I hope he has not ordered much more. He kept talking for a long time when he placed the order.

The bar is run by two older women, both in matching, red dresses. One of the obasaan comes over to our table, kneels down in front of it, where she stays for the rest of the night, making sure our glasses are filled all the time. As soon as we have a sip from the awamori, as soon as I put the glass down, she instantly leans over and refills it. Always keeping it full. It is impossible to keep track of how much you are drinking. I try sticking to beer, but the obasaan, when she notices this, picks up my glass, hands it to me, urges me to drink. I politely take a sip. Not big enough it seems. I take another one, bigger this time. She nods and smiles. Refills my glass. 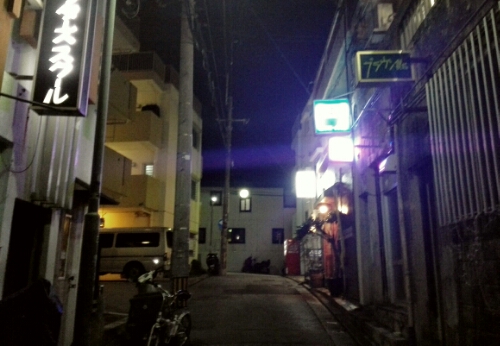 The streets of Sakurazaka in Naha

Then the other woman comes with food to our table. Large portions of beef stew and rice. Some grilled fish. A plate of pork sausages. It has been a few hours since dinner now, I happily dig in. And it is delicious, but I guess almost all food would taste great at this stage and in my condition. With my mouth stuffed full of rice I am handed the microphone, it is my turn to sing karaoke. I quickly chew and swallow my food, pick a song and break into my usual karaoke routine. Take On Me by AHA. I simply blew their minds away.

It was hard to get out of bed the next morning, but I could not care less. I put the ‘Do not disturb’ sign up outside my room and slept in for a few hours. It had been a great night, a memory of Okinawa to keep forever. Especially having to carry the sleeping bartender out of the bar and into a taxi.

2 thoughts on “From Output Rock Bar to Sakurazaka”