I visited Output Rock Bar in Naha, Okinawa in September 2016

It did not feel like a bar or night club at all, it felt like a private party. Just a group of friends getting together to play some good tunes, talk and enjoy themselves. It just so happened to be that they did this in a bar in Naha. And I was invited and immediately accepted as one of them. I was sitting on a bar stool, a beer in my hand, feeling very happy. This is what I travel for. This is why I love to leave the comfort of my home. To meet new people, make friends across the globe. Learn about a place through my interactions with the local citizens. I was having a great time, and had a smile on my face impossible to wipe off.

I had gone to Output Rock Bar the night before, the bartender had insited I come for the party at the bar tonight. Several good, local DJs would play, it would be lots of fun. Of course I could not say no. Now, I am not such a fan of DJ and dance music, I thought this was a rock bar, but promised to drop by. It was my last night in Okinawa, and I could always go somewhere else if it was boring. Blaming an early flight or something. As it turned out, once there I had no intentions of leaving. 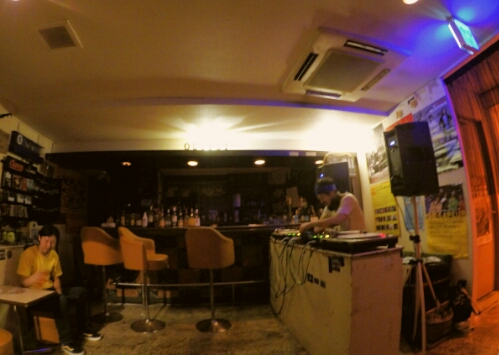 At first it was quiet

When I first got there the bar was almost empty, only the bartender and the DJ had turned up yet. I gave me a feeling of déjà vu, wasn’t this almost like last night. A quiet bar, just me and the bartender chatting. I sat down on a bar stool by the bar, ordered a beer. The bartender came over to have a few words with me, he was still hungover from last night and was downing beers to feel better. I chose a more slow and careful strategy, I was feeling quite all right anyway, a large meal of Okinawa soba had certainly helped. 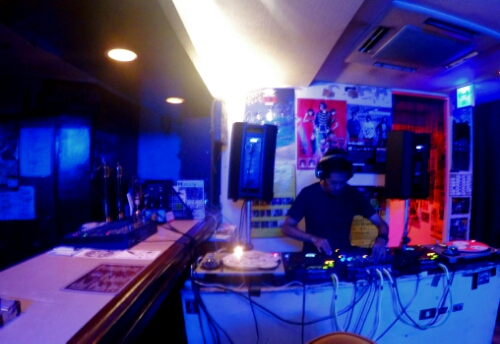 One of the DJs

Slowly the place started to fill up, it was apparent that everybody knew each other. Everybody but me. It did not take long before I was part of their group though, they were really friendly people, and even though their English might not have been the best, we found a way. One by one they came up and introduced themseves to me, the ones who did not speak English trying their best. After that I always found someone to talk to or to dance with. The DJs changed throughout the night, the music was not too bad. I even got to try out DJing myself. I wasn’t really good at it. 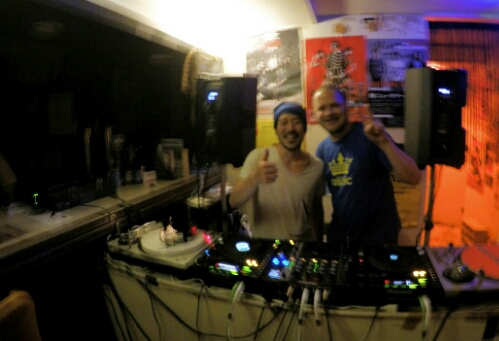 Learning to DJ At Output Rock Bar in Naha

Time flew by, suddenly it was time to go. A lot later than the time I had planned to return to my hotel. Tomorrow morning I had to go to the airport to get a flight back to Tokyo. My time in Okinawa had come to an end. I said goodbye to my new friends, promised to come back to Okinawa in the not too distant future. The next morning I received several messages wishing me a safe flight, saying I should return soon. It had been a great trip to Naha and I plan on returning soon.