I read Breasts and Eggs by Mieko Kawakami in January 2017

Breasts and Eggs is the second novella of Japanese author Mieko Kawakami and was published in 2008. In the book we meet Natsu, a single woman living in one of Tokyo’s poorer neighbourhoods. The book begins with Mieko going to the train station to pick up her sister Makiko and her daughter Midoriko who are visiting Tokyo from Osaka. Makiko is coming to Tokyo to look into getting breast implants while Midorika has stopped talking and only communicates with the rest of the world through her notebook.

Mieko Kawakami, originally a Japanese pop artist, had her literary debut in 2006. It was with Breast and Eggs in 2008 she had her literary breakthrough. Her writing style is heavily influenced by her former carerr as a musician, it can sometimes feel as if you are reading lyrics to music. 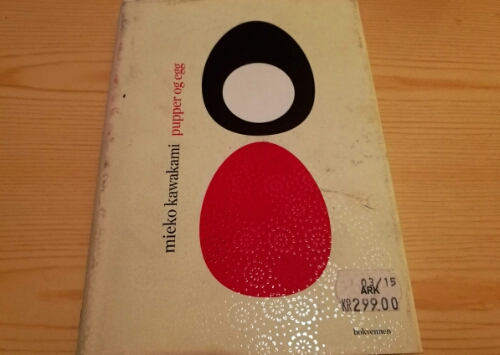 The book describes a world heavily influences by the lost decades, the economic stagnation in Japan that started in the 90s. Stagnation and deflation had led many people into unsecure, low-paid part time jobs. Many women end up int the entertainment industry, working as hostesses at bars. A job not supposed to be sexual, they are mainly there to entertain guests and keep them drinking, but certainly a job that carries a certain social stigma. Makiko is employed at such an establishment in the book.

While Natsu’s job remains unclear in the book, we can infer she is not well paid, Makiko is working at a hostess club, a job that becomes more and more uncertain as she ages. Her desire for breast implants can come from this uncertainty, a last attempt to fix her body and secure her job a bit more. This kind of surgery would cost a lot of money of course, money that would have to come from savings originally for Midoriko’s education fund, or bought on credit which would further deteriota their financial position,

Breasts and Eggs is well written, easy to read and revolves around an interesting story and characters you get to know. Describing a side of Japan usually not seen by foreigners, it it a nice insight into this fascinating country. I found the book to be very good, read it all in one sitting. I have no problem recommending this book, especially for people interested in Japan and Japanese Culture.

Check out more Japanese books on my page Books from Japan – A guide to Reading About Japan.

For all my book reviews, see my Book Reviews Page