I chose a vegetable soup, some local sausages and a chicken Kiev, I was in Kyiv you know. Added some bread, in one of the breads a potato and onion stew was baked into it. Cucumber mayo as a sauce. Ice tea to drink and a slice of cherry cake for dessert. A lunch large enough for me and all for only a few dollars. I found a seat at an empty table and started eating. Proper Ukrainian food at a restaurant frequented by locals. It was very tasty. I was at Puzata Hata, a traditional Ukrainian restaurant serving authentic local food.

Puzata Hata is a Ukrainian fast food chain with restaurants all over Ukraine. I Kyiv there are 12 restaurants scattered all over the city, you are never far away from one of their locations. Food is served cafeteria-style. Pick up a tray when you enter, walk along the counter and get whatever food you fancy. It is not always easy to know what all the dishes are, but the staff working here are very helpful, even if their English might be a bit lacking. Puzata Hata is the place the citizens of Kyiv go when they want a proper Ukrainian meal. 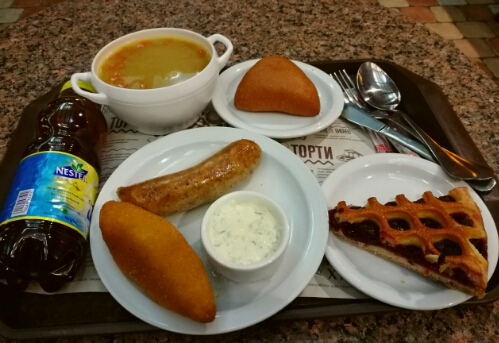 My first meal at Puzata Hata

The first restaurant I visited had a massive seting area, most of it filled by Ukrainians, but a few tourists at some tables as well. There were families out to eat, friends coming to socialise and couples out on a date. Prices are cheap compared to many other restaurants in the city and they have a wide selection of different food. Something for everyone.

I was recommended Puzata Hata from the bartender at Nikka Bar. We had been chatting the night before, I asked him where he would go out to eat if he wanted some proper Ukrainian food. He quickly answered Puzata Hata, he would go there often he said, then quickly mentioned another, fancier and more expensive restaurant. I should go there, he thought. Puzata Hata was where Ukrainians would go. Tourists, with more money, should go to a better restaurant. The food at Puzata Hata is good, but not as grandmother used to make it, he said with a smile on his face. I already knew where I wanted to go. Of course I would go where the locals used to go.

The next day, my last day in Kyiv, my flight would leave in the afternoon, I returned to Puzata Hata for lunch. I chose a different restaurant this time. Located in the food court of the shopping center under Maidan Square, this one was a lot smaller than the first one I had visited. Their selection of food not as big. I got a pork chop, some fish baked in a bun, the same delicious cucumber mayo I had the day before. A chocolate muffin for dessert. For the price the food was great, I considered going for another round even though I was full, decided against it after finishing my muffin. I remembered the words of the bartender when mentioning this place. The food is good, but not like grandmother makes it. You know? Having never tried Ukrainian food before, I still knew what he meant. Good food, but could be better. 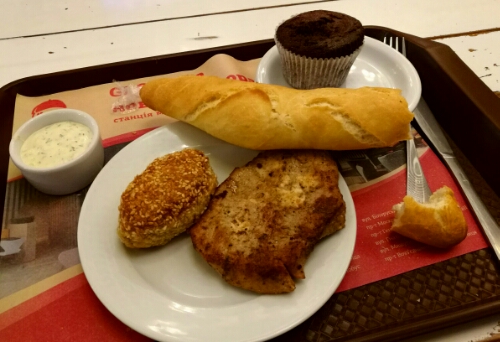 Puzata Hata is a nice and decent restaurant and a visit to one of its locations is recommended if you are in Ukraine. It offers a Ukrainian dining experience, with good local food, for a very decent price. For travellers on a budget this is a great place to visit. A taste of the local food, hardly making a dent in your budget. Their selection of different dishes is also very large (depending on the location), so you can visit here many times and always try something new. The different restaurants also seem to have slightly different menus. So after having tried one you can always visit another.