I visited Ramen Burger Restaurant in Kyiv, Ukraine in January 2017

It is not always that mixing two good things leads to something better. Especialy when it comes to food. In Sweden having banana on pizza seems to be a big thing. It has never been to my liking. When visiting Kyiv I found another peculiar mix. The Ramen Burger. A burger where the bread is replaced by Ramen. The burger is prepared like any other burger, Except you replace the bread with ramen. The ramen needed to be fried a bit before serving to obtain a bread-like consistency. I was sceptical, but had to try it. Ordered my meal with low expectations, so low it would take a lot for me to be disappointed. 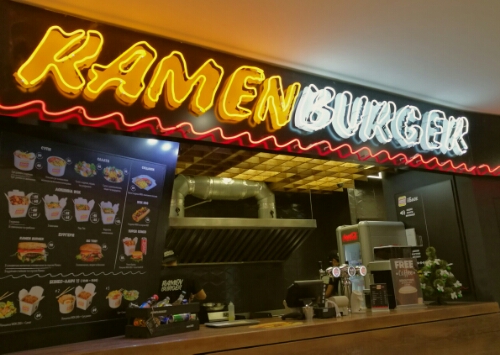 Ramen Burger at the Food Court in Kyiv

I was in the shopping center located below Maidan, a high-end shopping center located only meters below where the massive protests and fights had happened in 2013 and 2014. Above ground, on Maidan, bullet holes from the snipers could still be seen on some walls and lightposts. Underground it was all Western stores, christmas decorations and bling. I had just bought another memory card for my GoPro. In hindsight I regret not buying more, prices were half of what I paid in Norway. 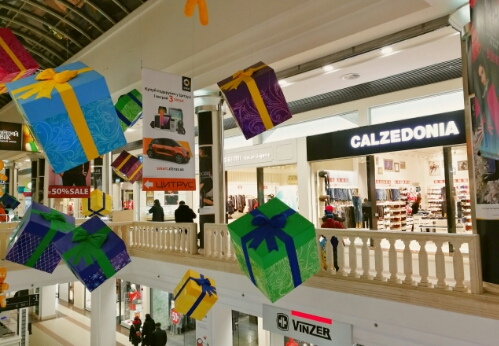 The Shopping Center under Maidan in Kyiv

As I was leaving I passed the food court, only fast food restaurants, not what I am normally looking for when travelling, but then I spotted a place called Ramen Burger.

Readers of my blog might have noticed what a huge fan of Japanese food I am, and that Ramen is my favorite food ever. Whenever I am in Japan, I eat a bowl of Ramen almost every day. I just love it, some days I might even have two or three ramen meals. I love the meaty, umami taste of the broth. The small servings of meat and the perfectly cooked noodles. A meal perfect both for lunch and dinner, and the perfect hangover food. I had to try the Ramen Burger in Kyiv.

I bought their signature Ramen Burger and a pint of beer. Turned out Ramen Burger had the cheapest beer I found in Kyiv, it was only €0,8 for a pint. Now that is a bargain. I only had time for a few sips before my food was ready. I sat down at my table, picked up the burger and had a bite. 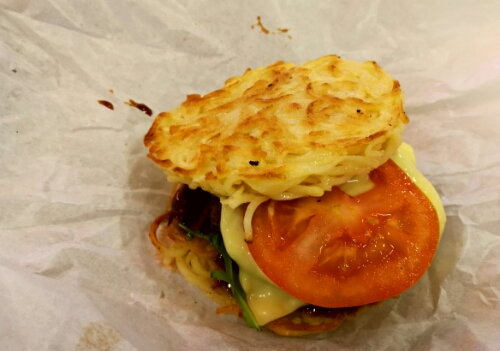 The Ramen Burger I had

I can’t really say I was that impressed by the burger. The meat patty was a typical fast food burger, a bit flavourless, just some ground up meat. Cooked by unskilled labour. The Ramen ‘bread’ was not much better, basically some instant noodles cooked, then fried for texture. It was soggy, sticky to hold, had even less flavour than the meat. My hands were full of grease after a few seconds. The burger filled my stomach, but was far from a culinary experience. Nothing to write home about really, but apparently good enough for a blog post. I finished my burger, washed it down with cheap, decent beer.

The Ramen Burger in Kyiv did not impress me, I would not return there for another meal. But it was very cheap and they had even cheaper beer there, so in the end it was all right. I still don’t think it is a meal that will become super-popular though. It seems to be more of a gimmick.