I visited The Ukrainian Genocide Holodomor Memorial in January 2017

It was so cold. The temperature was slowly creeping down towards -20° Celcius. Every now and then a gush of wind would come, making it even colder. I tucked myself as far into my jacket as I could, wrapped my scarf around my face, only my eyes were uncovered. Kept walking down the snow covered road. I was on my way to the Ukrainian Genocide Holodomer Memorial, a 45 minute walk from my apartment. I could have taken the bus but just love walking through new and unexplored cities. Even in freezing temperatures I refused to take the bus. There was just so much to see.

Luckily I was full, had just had lunch. I did not have to walk on an empty stomach. I had just tucked in as much food as I could, Ukraine is cheap, the food here hardly costs anything. I could eat and eat and eat as much as I wanted. It was a luxury the people of Ukraine did not have in the 1930s. 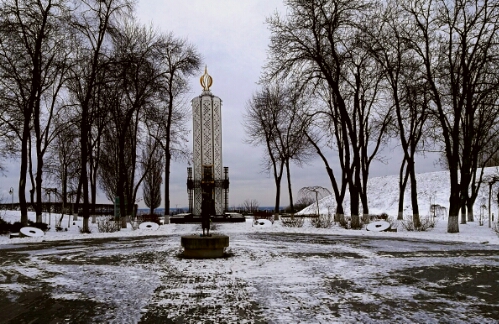 The Memorial above the museum

In 1932 and 1933, Soviet Ukraine experienced a horrible famine, killing somewhere between 2.5 and 7.5 million people. What made the famine even worse was the fact that it could easily be avoided, the famine was man-made. Already in 1930, academics and government advisors in Soviet Ukraine predicted the famine, little was done to prevent it. Some people argue that actions taken by the Soviet leadership in fact enhanced the famine, making it deadlier than it could have been. As the harvest collapsed, the communist government kept appropriating the food stuff produced in Ukraine, the population eventually reduced to eating bark and roots. The state propaganda machine started blaming farmers resisiting collectivisation, stealing food, ruining the food supply. The possesion of a few grains or a single potato could result in the death penalty.

The museum lay on a hilltop with a great view of Eastern Kyiv. Halfway up the hill I stopped for a moment to take in the view, snap a few pictures. Could not stay for too long though. As soon as I stopped moving it immediately got colder. The freezing temeperature started seeping into my bones. I was cold all over. I had to start moving again. Always in motion, always moving. Always heading for my destination. Once there I could get inside, I kept dreaming of a heated room. I could take my beanie and jacket off, regain my warmth as I learned more of the history of Ukraine. 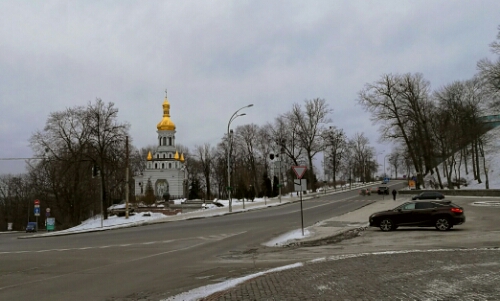 On my way to the Holodomor Memorial

The 1932 harvest in Ukraine was considerably lower than previous harvests. Rations in towns were gradually lowered, on the countryside people were already starving. As starvation came to the urban population of Ukraine, in the spring of 1933,  propaganda movies portrayed peasants as traitors and counter revolutionaries, hiding away their grain and potatoes from the evermore starving urban population. As the famine became worse, reports of cannibalism surfaced, more than 2500 people were convicted of cannibalism during the Holodomor.

The causes of the famine is still debated. Some say it was caused by collectivisation of the Ukrainian SSR countryside, including moving away from growing familiar crops like grain, instead farming new foodstuffs like sugar beets and cotton, as well as poor administration and management of the plan. Large amount of grain remained unharvested, or was lost during processing, storage or transportation. Others believe that the famine was a Soviet attack on the Ukraine, trying to combat the growing Ukrainian nationalism. 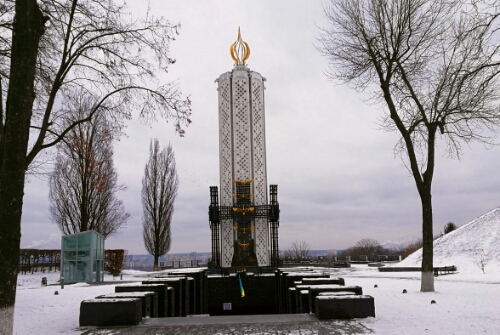 The memorial above the entrance to the museum

I inally made it to the Memorial, the museum was underground, a large memorial stood above it. I quickly snapped a few pictures of the monument above ground first, my phone had been kept warm close to my skin. Only time for a few pictures before putting it away again. Too long and it would probably die once more. I then headed for the entrance to the Memorial Museum. It was closed! Closed because of christmas. All this time I had anticipated, looked forward to coming here. I really wanted to see the museum, learn more of the Holodomor. And when I arrived it was closed. Stupid orthodox christmas. I stood outside the entrance, freezing, wondering what to do.

There is no international consensus of whether the Holodomor was a genocide or not. Ukraine calls it a genocide, as do 14 other countries. The European Union calls it a crime against humanity, but does not use the word genocide about the famine. Russia considers it only a part of the Soviet famine of 1932 and 1933, and does not consider it either a genocide or a crime aginst humanity. The debate is ongoing to this day, both among countries and among scholars, and no real consensus can be expected anytime soon. Whether it was a genocide or not, it was a horrible time in Ukrainian history, a man-mad catastophy that killed millions and it could have been avoided. 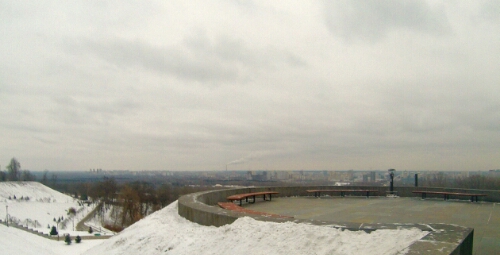 The view from the Memorial

Not far from the museum lay Pechersk Lavra, a monastery with an impressive cave system I had read about. I had not planned to visit today, but seeing how the Holodomor Museum was closed, I might as well drop by. It was only a few hundred meters away, a visit there would not make the walking trip such a waste of time. I just hoped the monastery was open. And that it was warm. I set out towards it, dreaming of warmth and heat.

14 thoughts on “A walk to The Ukrainian Holodomor Memorial”