I visited the monastery Pechersk Lavra in Kyiv in January 2017

I had to crouch down as we walked through the caves. My guide walking in front of me, I was following with a small candle in my hand for light. My guide would usually walk at a speed fast enough to extinguish my candle if I tried to follow. I would shield the tiny flame with my hand, trying to keep up as best I could. Many other people were exploring the caves as well, a few with guides, most people on their own. I was glad I chose to hire a guide, the information she provided was worth the few Euros I paid many times over. 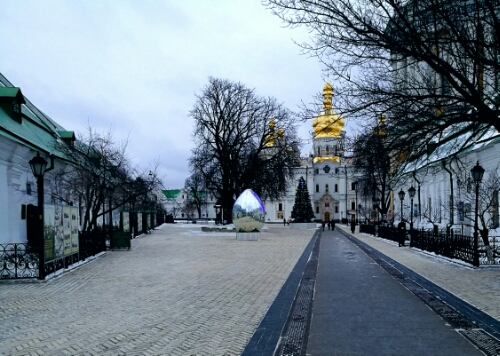 Inside the Pechersk Lavra Monastery

I had not really planned to visit the monastery that day, the plan was to go to the Holodomor Memorial Museum just down the road from Pechersk Lavra. When I finally arrived at the museum I found it closed for christmas, I ended up heading for the monastery instead, crossing my fingers, hoping it would be open. I was lucky, I arrived there half an hour before closing time. As I walked through the monastery, heading for the caves, I passed a small office where you could hire one of the nuns for a guided tour. A sign outside said you could have English, Ukrainian or Russian speaking guides. I decided not to let the opportunity pass. I knew little of the caves and the monastery. A guide could provide me with interesting and useful information.

Pechersk Lavra is an Orthodox Christian Monastery which was founded all the way back in 1051 and had been a center for orthodox christianity in Eastern Europe ever since. It was founded by Saint Anthony, a monk and missionary on a mission to christianise the Kievan Rus. When arriving in Kyiv he found a cave at the Berestov Mount to dwell in, a community of disciples was soon established there. Today the Pechersk Lavra consists of several churches and monuments; the caves and the Great Lavra Belltower among its chief attractions. Pechersk Lavra is today a UNESCO World Heritage Site and named one of the Seven Wonders of Ukraine. 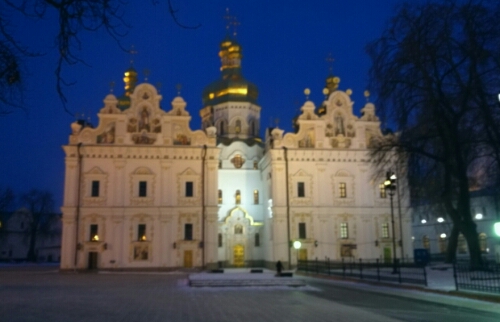 The cathedral inside the monastery

Before entering the caves my guide gave me a brief introduction to the monastery and its history. We then decended into the caves. Narrow caves winding through the mountain, I had no problem touching the walls on either side of me as I walked, several places I had to crouch not to hit my head. Every ten meters or so lay a mummified saint. My guide would stop, crouch down and kiss the saint, make the sign of the cross and then tell me the story of the person lying embalmed there. I have to admit I don’t remember all she told me. There were a lot of saints enshrined there, I got a lot of information to process in a very short time.

Every now and then we would also come to small chapels dug into the cave system. A mix of praying nuns and monks, tourists walking by themselves, and other people who had a guide to show them the caves occupied the chapels. The tourists usually just passing through, candles in their hands, the monks and nuns kneeling down in front of the icons, lost in prayer. A solemn, almost magical feel occupied the cave system. The saints in their beautiful coffins, elaborate icons hanging on the walls, colorful chapels with beautiful tapestries on the walls. Orthodox christianity sure is a lot more colorful, not afraid of displaying wealth and art, compared to the dreary and a bit grey Lutheran christianity I am used to from Norway. A lot of golden and red colors decorated the caves. It was all very beautiful. 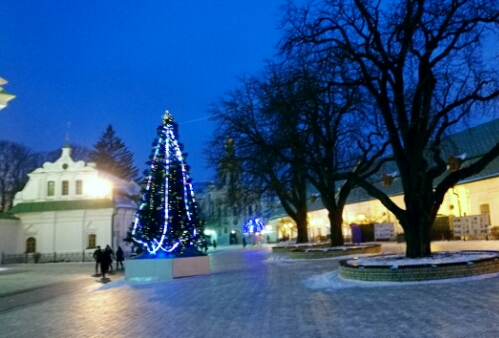 The monastery decorated for Orthodox Christmas

Pechersk Lavra actually consists of two cave systems. The Near Caves and the Far Caves. Lying at a depth of 10 – 20 meters,  the whole cave system is almost 700 meters long, and has three churces in both the near and the far caves. All along the caves are small cells where monks used to seclude themselves, devoted to prayer and fasting. The caves were at first closed to outsiders, but opened up in the 15th century for visitors to come and see. Today the caves are a major tourist attraction in Kyiv, allowing visitors to come see the saints and incorruptible relics kept there.

We were nearing the end of the tour, I started to see some signs pointing to the exit, when all of a sudden the lights came on. The whole cave system was illuminated. Clearly a sign that they were closing, telling the tourists to leave. We headed for the entrance, but the tour did not stop there. We stood in the lobby outside the caves for a while, my guide still chatting away, before we headed for the gift shop. I was shown two excellent books about the monastery, I bought them both, before my guide said goodbye and left. I lingered inside the gift shop for a few more minutes. I did not really want to go out in the cold again. 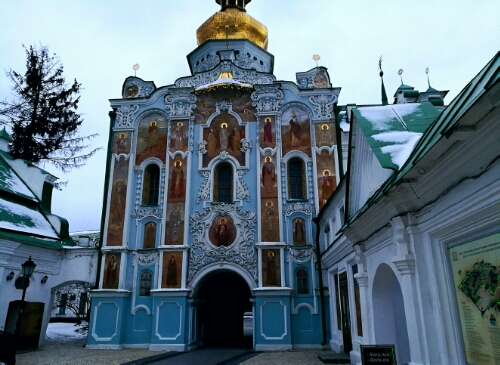 The entrance to Pechersk Lavra

As i left the cold hit me straight away, I tucked myself into my clothes the best I could. Remembered a bar just down the street. I guess I could go bar-hopping all the way back to the city. Walk a bit, find a bar where I could regain my warmth. I just hoped the bars would be open. It was after all Orthodox Christmas Day.

Unfortunately it was not allowed to take pictures inside the caves