I visited several night markets in Taipei, Taiwan in September 2016

I started with the mussels. Perfectly cooked in a spicy sauce. They tasted amazing, and the whole portion for only TD 60. A scoop. They were so tasty I wanted to finish them all, but I couldn’t. There was so much to try here, for such a cheap price, I could not fill my stomach up on the first few dishes. I threw over half of my mussels away.

I followed up with Taiwanese sausage, oysters, various meat grilled on various sticks. Then a beef noodle soup. The stalls offering food were spread out all over the street. All the food looked delicious. Further down the street the stalls offered various games for kids. Shoot balloons, throw darts, fish for presents. I was mostly focused on all the delicious food.

To complete my culinary evening I went for the duck’s head. A complete head of a duck, skinned, then grilled. Beak and all. It lay simmering on the hot plate, when I ordered the chef quickly heated it up a bit on the grill, then chopped it all up in to small pieces. I paid, found a place to sit. I looked at my food for a while. Even chopped up it still looked like the head of a duck. You could see the beak, the brain, the parts of the face. I got over my initial disgust and took a large bite. It was delicious. Very tender meat, with quite a sweet taste to it. A lot sweeter than most other meat I have tried. The beak gave it all an extra crunch of course. I was already full, but kept on eating. I loved it. That was the only dish I finished that night. After that I was so full I was barely able to walk. 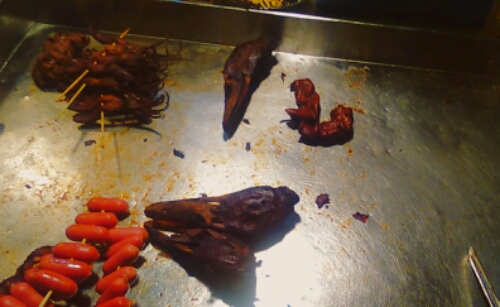 It was my first night in Taiwan, my plane had touched down at Taoyuan Airport only hours before. I had just had some of the best food in my life, street food served from small stalls that popped up every evening. I was in a night market in Taipei and I was loving it.

Night markets are a big part of Taiwanese culture. This is where people gather to eat, drink and socialise. From humble bginnings, a few simple stalls along the street, night markets have gotten bigger and bigger, including more permanent shops. Today you also find many international chains like 7-Eleven and McDonald’s with franchises in or near a night market. Over the years night markets have also gotten more and more popular among tourists, now one of the first things on a visitor’s bucket list. 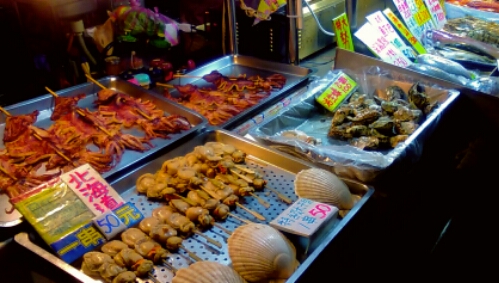 There are so many night markets in Taiwan to choose from, and it is impossible to visit them all and try all they have to offer, unless you are staying in Taiwan for a very long time. In this post I rather choose to focus on two markets. Ningxia Night Market in the Datong District in Taipei and Shilin Night Market in the Shilin District of Taipei.

Ningxia Night Market, one of the oldest night market in Taiwan, is quite small, with a little over 20 food stands and restaurants. There are also some game stalls. It is a market popular with locals and known for its great food, the food stands here have been serving food for over 50 years now. The focus at Ningxia Night Market is on tasty, savoury and traditional Taiwanese food. 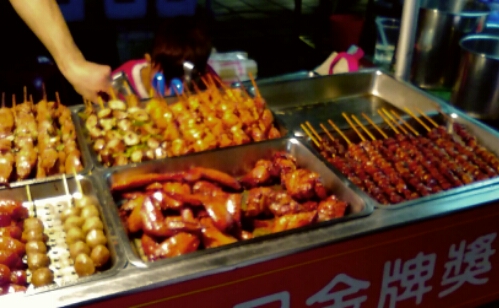 I loved the atmosphere at Ninxian Night Market. It was quite quiet, visited mostly by Taiwanese people, small, intimate, and a great smell of food permeated the area. There was so much food on offer, everything looked and smelled delicious, at first I simply walked back and forth to get an idea on what was on offer, what I should eat first. All the food I tried was delicious, and it was all very cheap. I found Ningxia to be a charming and authentic night market, a traditional Taiwanese night market. It quickly became one of my favorites.

Shilin, on the other hand, is a much larger night market. The food court itself has almost 550 food stalls, and the streets around are packed with restaurants, store fronts, food stalls and game stalls. It opens at around 4 pm and crowds start getting big around 8 pm. Shilin Night Market is the most popular night market for tourists in Taipei, it is hard to walk in the market without hearing English being spoken somewhere. 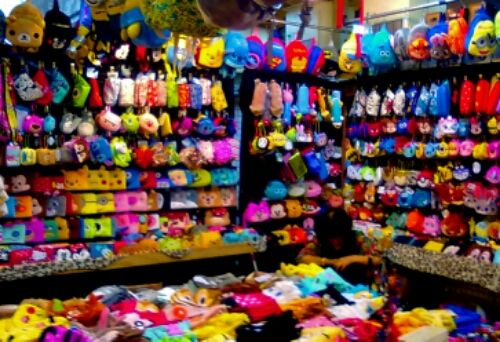 I found Shilin Night Market to be almost more of a tourist destination than a real night market now. Don’t get me wrong. The food was good, the great bar Funky Fresh was there, there was plenty to see, and a huge crowd came there every night, many of them tourists though. I certainly had a great time visiting Shilin, but I liked Ningxia Night Market more. It felt more real, more local. It was more intimate, even though there were more people and less room to walk in Shilin. Ningxia had just a few stalls, but they sold the most delicious food. Families were out, eating, playing some games. The parents having a few beers. A group of students out having more beer than food. A couple out for dinner. In Ningxia I certainly felt I was in Taipei, taking part in the local way of life. In Shilin I felt I was visiting a tourist attraction. 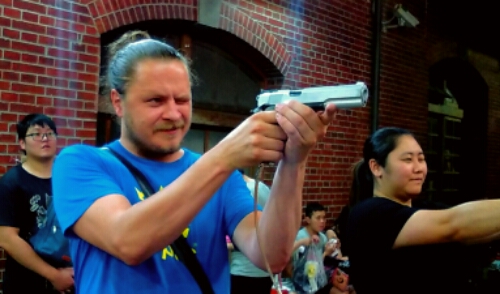 My days in Taiwan would usually consist of a solid breakfast but only a small, light lunch. I needed to make room for all the food I would have in the evening. I would visit a night market most nights in Taiwan, work my way through dish after dish. I could never find a favorite, they all stand out. They were all good. The most memorable must be the duck’s head, the beak I was worried I would struggle with at first, but when I tasted it my mouth immediately started watering, I wanted more (My mouth is watering as I write this in fact).

Taiwan is a country of a lot less bars than other countries, like Japan. In Taiwan peope go to restaurants and night markets instead. The night markets offers a meal and a place to socialise for a low price, I can see why the Taiwanese want to go there instead of a bar. My nightly visits to night markets was something I looked forward to all day, as mentioned before I would deliberately eat less for lunch than I wanted just to be ready for a massive meal at the night market. 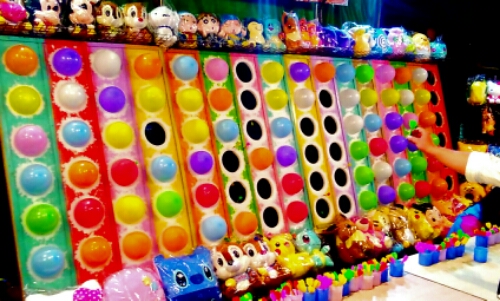 If visiting Taiwan make sure to visit at least one night market and try to visit several. They are not all the same, and visiting a few and finding your favorite is part of the thrill. Night markts are an integral part of Taiwanese culture and give you a glimpse into the Taiwanese’s daily lives. In addition, the food is good and like the beer very cheap. A visit to a night market might be an evening to remember.

18 thoughts on “Night Markets in Taiwan”