I visited Tamsui outside Taipei in September 2016

One of the most popular things to do whe visiting Tamsui just north of Taipei is to watch the sunset. It is supposed to be very beautiful here, setting over New Taipei, the light creating a spectacular horizon. The day I was visiting had been a rainy day, massive rain showers all day followed by some minutes of sun and blue skies. The last hour it seemed as the rain had quieted down a bit. Quicker showers, not so intense. As the sunset approached I seriously thought it would clear up. Not just for some minutes but for the rest of the evening. As the sun started falling towards the horizon there was hardly a cloud in sight. But that would all change. Just as the sun touched the horizon you could not see it anymore, dark clouds were in the way. A few seconds later the rain started pouring again. I missed seeing the sunset in Tamsui. 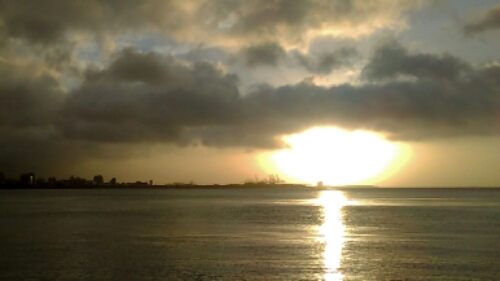 The sun is just about to set in Tamsui, Taiwan

I had arrived a few hours earlier, taken the 45 minutes metro ride from Ximen where I was staying in Taipei. Tamsui is the last station of the red line. I walked out of the station, down toward the water. Bought some BBQ skewers and a beer from a street vendor which I munched on while walking along the water. Just looking at the buildings, the piers, the small parks, the street vendors. Trying to get a feel of the place. 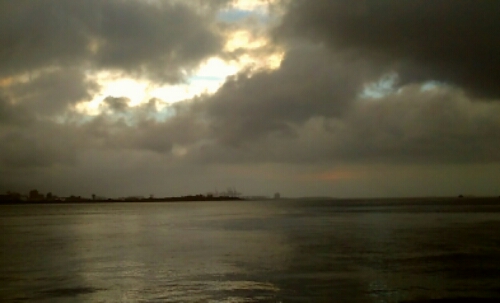 Tamsui is a district in New Taipei City in Taiwan, its indutry now mostly geared toward tourists. Tamsui is also home to three universities and with the completion of a metro line to the district in 2007, it has also become a popular suburb of Taipei with real estate prices soaring.

Tamsui used to be a major port city in Taiwan, and has been in the hands of both the Spanish and the Portugese throughout history. In the 20th century, accumulation of sediments in the Tamsui River saw the district’s importance as a port city wane, with more and more of the shipping industry moving to Keelung City on the east coast. Following the disappearance of the business from being a port city, Tamsui revitalised itself as a tourist destination in the north-east coast of Taiwan. The area now include several open-air markets selling good, local food, and the city has built several riverside parks for the visitors to enjoy. 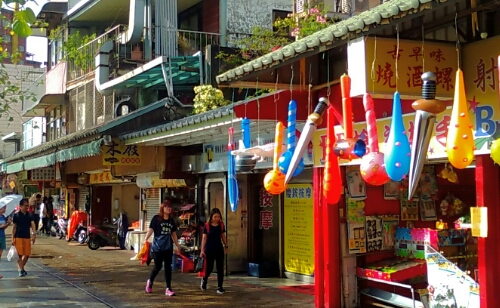 Shops along the river in Tamsui

The riverside path seemed to go on forever. I was walking towards the sun, towards the sunset. Not the only one out for a stroll, watching the coming sunset. At first store fronts were lining one side of the road, they eventually disappeared. Now only a sporadic cafe or restaurant along the river. Most buildings showing only a wall to the river. It was still a beautiful walk. The river on one side, slowly flowing by. The city of Tamsui on the other, pictureesque buildings by the water. 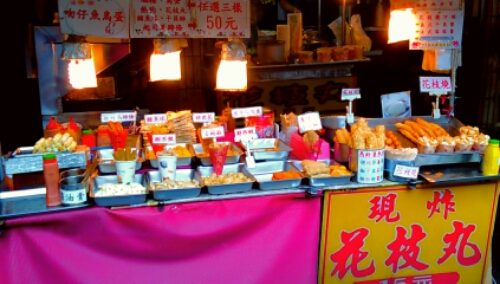 I had been walking for almost half a hour. My beer was empty, my food eaten a long time ago. Sunset was not far away now, the sun started falling towards the horizon. I turned around, walked the same way back. Often stopping and turning to see how low the sun was. I was about halfway back when I stopped to watch the sunset, a popular activity in Tamsui I had heard. And that is when it started raining. Within minutes the sky ws a dark grey and heavy rain started falling. I got my umbrella out, started walking toward the station. What a disappointment. 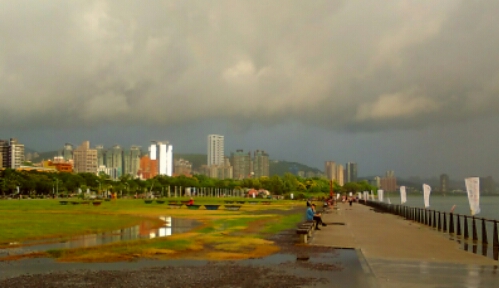 A park along the river

It was still raining heavily when I returned to the metro station. It felt good to get out of the rain and into the station. I headed for the platform, a train was leaving any minute now. My time in Tamsui was over. A beautiful place, good food, a nice walk along the river. All I missed was the sunset, but nothing to do about that. Tomorrow would be my last day in Taipei, and a typhoon was on its way, I wasn’t sure how much I would be able to do at all. Might be stuck in my apartment. I used the time on the metro to read about the typhoon on my smart-phone. Trying to figure out what to expect. When the metro reached Jiantan Station I got off and headed for the Funky Fresh Bar. I had to have one last beer there before leaving Taiwan.

18 thoughts on “Beautiful Tamsui in Taiwan”